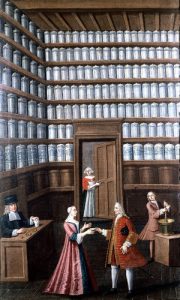 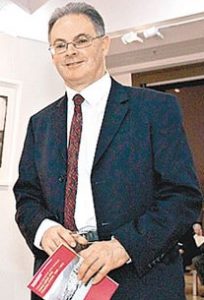 People taking medicines often take more than one medicine simultaneously. Polypharmacy and combination therapy can have many advantages, as well as a number of difficulties, such as non-compliance, unwanted side effects, drug-resistant infections, medical disasters, and waste of money. It might therefore be of interest to look at some of the ways that have been devised of recognizing and dealing with these combinations of drugs, through visual and literary documents from different times and places.

From the age of Alexander the Great (4th century BC) to the 18th century AD, the medicine Theriac was the classic example of polypharmacy. This post-Hipppocratic medicine could contain as many as 80 ingredients, mostly herbal but some animal and occasionally mineral. In the 17th and 18th centuries, large cities such as Venice, Amsterdam, Nuremberg and Paris organized official ceremonies at which Theriac would be made up according to the recommendations of the academic and medical establishment (Watson, 1966 p.104-109). 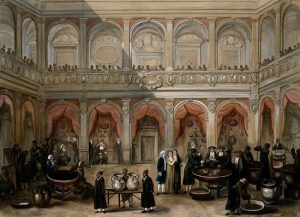 The manufacture of theriac at Bologna. Drawing by Aleardo Terzi. Wellcome Library reference no. 44599i

Bologna, with its great old university, seems to have had a particularly magnificent ceremony, which was depicted in a watercolour by Domenico Ramponi in 1818. The watercolour was seen by one of Henry Wellcome’s advisers and copied around 1904 in a large pastel drawing now in the Wellcome Library by the Sicilian artist Aleardo Terzi (1870–1943). The scene is the courtyard of the grand Archiginnasio that stands today, still looking uncannily the same, in the heart of the city. 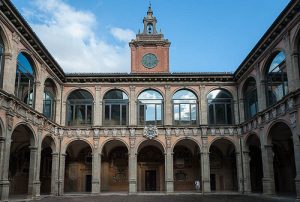 As can be seen in the Bologna ceremony, the social, economic and cultural prestige of high-quality Theriac outstripped any pharmacological value it may have had. The medicine preserved traditional knowledge. It spared patients from the ‘pill burden’, or complicated tasks of compliance, by transferring those tasks from the patient to the medical authorities. Finally, apothecaries who sold the medicine made up according to the approved standards would be safe from inspectors, lawyers and regulators.

There were of course sceptics about the value of Theriac, as about everything. In antiquity, Pliny the elder (23-79 AD) dismissed it as a showing-off of technical skill combined with a boastful advertising of knowledge. Guy Patin (1601-1672), dean of the Paris Faculty of Medicine, stated “The reputation of Theriac is ineffectual and groundless.” Johann Juncker (1679-1759), a professor at Halle University, pronounced that Theriac “and other remedies that are thrown together rather than made up, do more harm than good. God only knows why the false stories about these remedies have taken in almost the whole world.” [1] 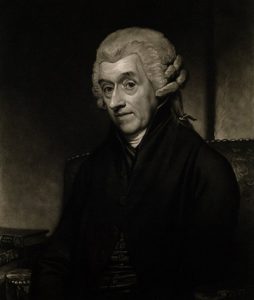 In the English-speaking world it was William Heberden (1710-1801), using what he called “the approach of light and learning”, who really put the boot in. In 1745 he wrote and distributed a 20–page pamphlet entitled ‘Antitheriaka’, with the title printed in Greek (Αντιθηριακα) to soften the blow. The subtitle was in English, but its anodyne wording gave little away about his viewpoint: “An essay on mithridatium and theriaca”. Heberden, a Fellow of the Royal College of Physicians, called Theriac “a mere jumble and chance-work, without any footsteps of order, proportion or design” (p. 9), a description of chaotic prescribing in any age. The antiquity of the drug, Heberden asserts, is no argument in its favour and, since somebody has to be the first to get rid of it, “Perhaps the glory of its first expulsion from a public dispensatory was reserved to these times and to the English nation, in which all parts of philosophy have been so much assisted in asserting their freedom from antient fable and superstition” (pp. 18-19).

In the end Theriac, like the western medical tradition of which it was a part, was erased from official use by the French Revolution and its associated return to a tabula rasa. After that event Theriac survived in outposts of tradition where the official pharmacopoeias could be ignored: thus a traveller in Lyons reported in 1904, “To my great surprise, I discovered that the Thériaque is still manufactured at the pharmacy of the Hôtel-Dieu by the nuns who act as chemists. The Mother Superior wanted me to drink some of the precious elixir which they make with the Thériaque, and gave me the enclosed prescription”. [2]

However, just as, in anatomy, the ten ancient Aristotelian categories were expelled only to be replaced by the 21 new Revolutionary “Tissues of Bichat”, so, in pharmacy, this ancient form of polypharmacy (Theriac) was dethroned only to be succeeded by different forms, more appropriate to the post-Revolutionary age. 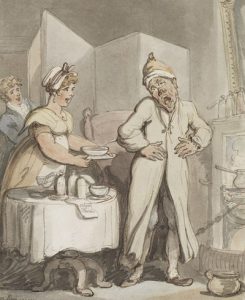 A man in pain receiving medicines from a housemaid. Watercolour by Thomas Rowlandson (1756-1827). Wellcome Library reference no. 2065026i

One of these forms can be seen in visual documents from the post-Revolutionary era. Several different drugs were prescribed simultaneously but dispensed separately. There was then a need to store them separately and label them clearly, especially if the patients were told to take a particular medicine as and when different symptoms made an unwelcome reappearance: the ‘pill burden’ now comes to the fore. In English Georgian prints and drawings, a common feature is the abundance of bottles with an attached luggage label. For instance in this watercolour by Thomas Rowlandson (above) one of the three bottle labels, containing a sedative, is inscribed “composing draught”, which the agitated patient clearly needs more than the gruel which he is being offered. 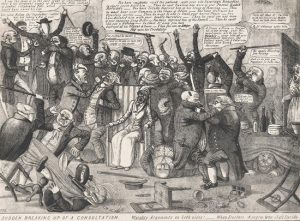 A patient sits helplessly in a chair while proponents of different medicines brawl with each other, overturning tables and chairs. Lithograph by C. J. Grant, 1834. Wellcome Library reference no. 640599i

By the 19th century there was a superabundance of patent and proprietary medicines, fuelled partly by the supply side (doctors, pharmacists and manufacturers), partly by consumers (addicts, chancers, hypochondriacs, and the desperate).  The doctors and pharmacists are shown in this caricature by C.J. Grant (above): there is a crowd of them, each promoting or recommending his favourite remedy to the bewildered patient seated in the centre. 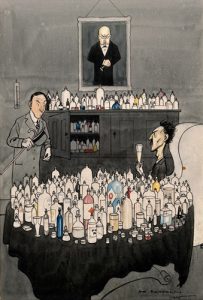 A representative of the consumers is caricatured (above) by H.M. Bateman in 1915 as a “Member of the Society of Hopeless Hypochondriacs”. In this watercolour painting, Bateman shows different medicines in different types of containers. Where the containers held ready made medicines (as opposed to medicines made up by the pharmacist), the vendors were able through packaging to brand their medicines in a competitive market-place: the Burroughs Wellcome company, founded in 1880 and flourishing at the time of Bateman’s painting, was one of the leaders of this trend. Distinctive packaging also helped the patient to differentiate between products when required to do so for therapeutic reasons. 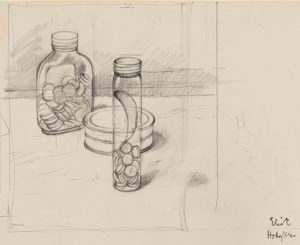 Pen and pencil drawing by Eliot Hodgkin, ca. 1962. Wellcome Library reference no. 2497376i. © The Estate of Eliot Hodgkin

Pharmacists could also help by placing pills in different containers. The English painter Eliot Hodgkin (1905-1987), who suffered from a crippling neurological disease, produced this drawing of medication looking from the bed to the bedside table.  Three generations of pharmaceutical packaging are shown: the moulded round box for ointment or pills, the glass shouldered bottle with printed label on the front, and the screwtop tube for tablets.

Different kinds of container, different labels, distinctive packaging, and the medicines themselves produced in distinctive colours and shapes, all help the confused patient. But how is the patient to remember which medicines have been taken and which are yet to be taken?  A number of dispensers have been produced by ingenious designers. 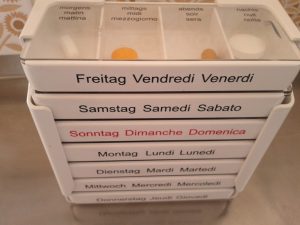 This one is the Medi7 ® sold by the firm of Hans-H. Hasbargen GmbH, of Bruchsal in Baden-Württemberg, Germany. The design is unattributed, but it provides a separate tray for each day of the week, and within each day a separate section for morning, lunchtime, evening and night.  The patient can see at a glance whether the pill has already been taken or not.

It would be an interesting  project for design students to see if they can improve on the Hasbargen product. No doubt the future will bring new ways of approaching the age-old problems of polypharmacy. What about a pill that is taken once but releases its different ingredients in a controlled manner at different times during the day?  Oh is it already here? Perhaps it should be called “New Theriac”, being as complicated to manufacture as the old version, but distinguished from the old by its means of delivery.