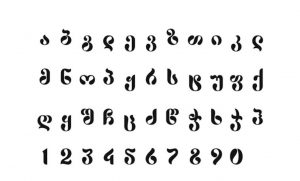 Dato Dolidze’s fingers move slowly on the old handset as he writes a text message to his son.

“My phone only has the Latin alphabet, so every time I text I need to translate the Georgian letters into the Latin. It’s a pain,” says the 50-something orange vendor at a Tbilisi vegetable market.

While newer smartphones enable the use of the Georgian alphabet, many in Georgia – where the average wage is $333 a month – are, like Dolidze, stuck with cheaper, older phones.

Georgia’s unique alphabet is one of the unintended casualties of such digital compromises.

The curvy Georgian alphabet has seduced scholars and calligraphers for centuries, most recently the United Nations Educational, Scientific, and Cultural Organization. Last December, UNESCO included the Georgian alphabet in the organization’s register of the intangible cultural heritage of humanity.

Georgian in fact features three scripts – the mkhedruli, the one commonly used today, and the ancient asomtavruli and nushkhuri, used mainly in religious scripts, and in most ancient documents. The three scripts, UNESCO wrote in its citation, “coexist thanks to their different functions, reflecting an aspect of Georgia’s diverse cultural identity.”

The Georgian alphabet is hardly in imminent danger. But it is a linguistic underdog, used only for Georgian and related languages in Georgia like Mingrelian and Svan, spoken by about 3.7 million people, or 0.06 percent of the world population. And with minor languages around the world dying at the rate of one every 14 days, some in Georgia are trying to make sure their language or alphabet is preserved for the long haul.

Of the 7,100 languages currently in use worldwide, only 500 are used online while only 348 are supported by Google, the world’s leading search engine, according to a UNESCO report published in 2015. And even many of those languages that do make it on the Internet have limitations: Georgian, for example, is represented by only a single font on Microsoft Word.

As a result of Georgia’s limited online reach, Latin script is often used instead. Retail companies as well as service providers, for example, tend to use the Latin alphabet in their promotional texts. “25% p’asdaklebas akhal ch’amosvlis” instead of “25% ფასდაკლებას ახალ ჩამოსვლის” (25% off on new arrivals).

“Our language and our alphabet is our heritage; it is a treasure that needs to be not only protected but also kept alive and updated,” explains Tsikolia, 45, a staunch advocate of using the Georgian script in day-to-day digital communication. “The world is becoming increasingly digital, and our characters must be able to evolve and adapt to a reality that is no longer just on paper.”

By March, all the fonts will be available on the contest’s website for open-source download, Tsikolia said. “The future is glocal, global citizens who value national traditions,” notes Tsikolia. “Switching to the Georgian keyboard takes two seconds, but many people cannot be bothered even to do that,” Tsikolia says.

Neighboring Armenia faces similar challenges, as it also has a unique language with an alphabet used solely for Armenian.

“Transliteration is common, especially among the vast diaspora, but not only,” explains Gegham Vardanyan, editor-in-chief of the media discussion platform media.am. “It is not only the Latin script, Armenians in Russia will communicate in Armenian using the Cyrillic script. The result is just bizarre, often you just cannot understand it.”

As in Georgia, enthusiasts have taken the initiative. Zohrab Yeganyan, press officer at Armenia’s human rights ombudsman, grew tired of seeing Armenian ill-treated on the web and vented on his Facebook page. “Let’s make February 7 the day to write Armenian on the Internet,” he wrote in a 2012 post. The response was overwhelming, both in Armenia and among the diaspora.

“There were people who only spoke Armenian and decided to learn how to write in Armenian, starting with posts on social networks,” Yeganyan told EurasiaNet from Yerevan. Yeganyan said that while the Armenian government has been relatively inactive in supporting the alphabet, there are signs that the private sphere is increasingly embracing it. “Recently one mobile company started sending texts to its customers in the Armenian script, switching from the Latin alphabet,” he said.

The popular push has supported the national scripts to become fashionable again, Yeganyan argues, as people have grown to realize that their particular alphabets are uniquely suited to represent the sounds of their language.

“Transliteration is no longer trendy,” says Yeganyan. Nowadays, he says, “it is often used to ridicule something or someone.”