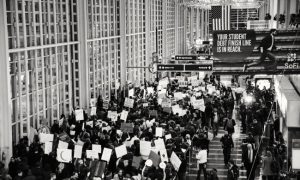 On Aug. 8, 2016, 50 former top-level Republican officials who served under Republican presidents going back to Richard Nixon issued a warning letter. Many had held senior national security posts. They called out the threat to national security posed by President Trump’s lack of self-control and impetuously “erratic behavior” and concluded that he “would be the most reckless president in American history” and “would put at risk our country’s national security and well-being.”

Their concerns were not limited to national security. They also noted that “He appears to lack basic knowledge about and belief in the U.S. Constitution, U.S. laws, and U.S. institutions, including religious tolerance, freedom of the press, and an independent judiciary.” They observed that “a president … must encourage consideration of conflicting views, … be disciplined, control emotion, and act only after reflection and careful deliberation.”

Sure enough. It’s taken less than three weeks to affirm every one of their concerns—and more.

Their concerns were recently echoed by members of The Bulletin of Atomic Scientists who updated the Doomsday Clock to the highest threat level since 1953, the year after the United States and the Soviet Union conducted competing hydrogen bomb tests. The reason? In a New York Times op-ed, two members of The Bulletin of Atomic Scientists cited, among other reasons, Trump’s comments about “expanding and even deploying the American nuclear arsenal.”

The security issues are not limited to concern that Trump might launch a nuclear strike in a fit of pique in response to a perceived slight or threat from abroad.

Following his inauguration he made this promise at the annual Washington, D.C., prayer breakfast.

We can’t know exactly what he meant by this statement, but in the past, he has spoken of deploying nuclear weapons against terrorists.

Our country has experienced the futility of using conventional military force against an enemy that blends in with civilian populations. Senior military officials are surely aware of the risk that escalated military action in the Middle East—let alone nuclear warfare—will further destabilize the region, generate millions of additional refugees, and encourage terrorist attacks in Europe and the United States.

A number of media sources, including The Atlantic, Slate Magazine, and Thom Hartmann, have named it. They suggest that Trump’s unstated but now implicit guiding agenda is to convert the United States from a democracy to a kleptocracy—an agenda that seems to enjoy the full and enthusiastic support of the congressional Republican majority.

The efficacy of our country’s time-tested system of checks and balances now depends primarily on the judicial system. Trump’s attack on the judge who suspended the administration’s temporary immigration ban is likely a preview of how he will respond to future attempts at judicial restraint of his abuse of presidential authority: He questioned the judge’s legitimacy and accused him of interfering with law enforcement and endangering the nation.

This is likely only an opening volley in the effort by Trump and his fellow kleptocrats to sweep away rules and regulations protecting the environment, unions, health and safety, religious freedom, human rights, and more.

It is already abundantly clear that Trump has no intention of fulfilling his promise to his base to drain the Washington swamp. He sent the first signals of his intention to instead protect and expand the swamp—particularly as it serves his own financial interests—in his persistent refusal to release his tax returns, his insistence that the president is exempt from conflict of interest rules, his refusal to divest from his businesses, and his appointment of billionaires and former Wall Street executives to his cabinet and his son-in-law as a senior White House advisor.

He revealed his intention to align his domestic and international policy actions with his business interests in his choice of the seven countries from which immigrants were temporarily banned. They are distinguished in two ways: “No Muslim extremist from any of these places has carried out a fatal attack in the U.S. in more than two decades,” as NPR’s Greg Myre writes—and the Trump family has no known business interests in any of them.

By contrast, the list of banned countries did not include Saudi Arabia, Egypt, Lebanon, and the United Arab Emirates, the home countries of the 19 terrorists involved in the September 11 World Trade Center attack. All are countries in which the Trump family has known business interests.

Trump is now seeking to roll back a consumer protection rule that requires financial advisors to work in the best interests of their clients. Egregious in itself, that action is merely a sideshow to his order to strip away Dodd-Frank regulations designed to prevent a repeat of the 2008 financial crash and facilitate a rapid and effective response to the future failure of large financial institutions. His Wall Street cronies stand to reap huge unearned gains, while putting the world at risk of a global financial and economic collapse far worse than 2008.

We face a national and global emergency. We must rise above our differences and come together with a sense of shared purpose and calm determination to secure the rights, freedom, and well-being of all. We must be ready to join with all—even those with whom we differ on many points—who find it within themselves to put the security and well-being of our country—indeed the world—ahead of position and party.

My hope is that the transparency of Trump’s attempted coup against democracy and our national security can bring us together as a nation unified in our dedication to our founding ideals that, though always more aspiration than reality, are now at risk of being entirely swept aside.