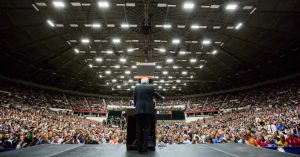 Bernie Sanders is the most-liked presidential candidate in the race—and the more people get to know him, the more they like him, according to a new poll out Tuesday.

The Associated Press-GfK survey found that 48 percent of Americans hold a favorable view of Sanders, compared with 39 percent who view him unfavorably, giving him the best “net-positive” rating in the field, and that his likeability score has increased since previous polls.

Sixty-one percent of registered voters said they would consider voting for him in November. Among Democrats alone, he has a 72 percent favorability rating.

Meanwhile, Sanders’ Democratic rival Hillary Clinton got 55 percent unfavorability versus 40 percent favorability ratings among all survey respondents, and Republican frontrunner Donald Trump scored 69 unfavorability to 29 favorability. In addition, 51 percent of respondents said they would never vote for Clinton and 63 percent said the same of Trump.

“I just like everything that he talks about and that he wants to do,” Brian Cane, 54, of Spokane, Washington, told the AP about Sanders. “I think Hillary, she’s too mainstream government. Bernie Sanders is fresh and new and the Republicans are freaking idiots.”

The poll comes just days after Sanders won the Democratic caucus in Wyoming, making it his eighth win out of the past nine contests.