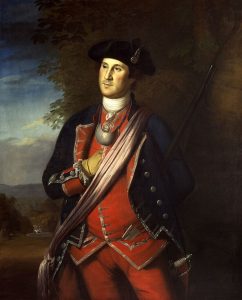 This, the earliest portrait of Washington, was painted in 1772 by Charles Willson Peale, and shows Washington in uniform as colonel of the Virginia Regiment. The original hangs in Lee Chapel at Washington and Lee University in Lexington, Virginia

When most people think of George Washington one or two images come to mind – – – the young lad who cut down the cherry tree or the older Washington who was the General and our first President. Very few, today, know him, or even think much about Washing­ton as a young man.

Washington, as a young man, had all the bright hopes and black despairs which seems all youth are subject to. It is unfortunate that our S.A.R. Bi-centennial Committee chose the portrait of Washington as Gilbert Stuart painted him as a solemn, weary 64 year old. I wish that Charles Wilson Peale’s portrait of him as a handsome and gallant young soldier had been chosen instead.

Even as a young man, he possessed the outstanding qualities of – – wisdom – – poise – – serenity. He obtained those qualities through self-discipline for he started out like most, being impatient and passionate. He was also eager for glory in war, wealth in land, and success in love. He apprehended the great truth that man can only be free through mastery of himself. Instead of allowing his passions to spend themselves, he restrained them. Instead of indulging himself in a life of pleasure, which he had ample means by age 20, he placed duty first.

Washington’s mother, his father’s second wife, was selfish and a terror to her children. One thing we may be grateful to her for, is she kept young George Washington from becoming a Midshipman in the Royal Navy – – a school whence few Americans emerged other than as most loyal of subjects to the King.

Some people say your George obtained his self ­discipline from his ability to handle a spirited horse, for one must be able to control himself first. George became a superb horseman, perhaps that led to fox hunting becoming his favorite sport. He also acquired a deep love for the outdoors and for people in general.

His formal education was scanty. His father died when George was only 11. At that time the College of William and Mary was for the Virginia gentry. Al­though endowed with the blood and instincts of a gentlemen, he was denied a gentleman’s education.

Shortly after his father’s death he was sent to live with his older half brother, Lawrence. He had been schooled in England, served under Admiral Vernon in the War with Spain, and now lived at Mount Vernon. Lawrence had married into one of Virginia’s first families, the Fairfax’s. They owned vast amounts of land including that adjacent to Mount Vernon. Lawrence, age 30, was a well established gentlemen when his awkward, clumsy half-brother be­came his charge.

The next few years for the impressionable George would indeed shape his life. He learned good manners, social etiquette, and a love for mathematics. It was his mathematics skills that qualified him as a surveyor to Lord Fairfax, who owned a large amount of land in the Shenandoah Valley that required surveying. So at age 16, for about $7.50 a day, George headed for the Shenandoah. He would save his money and invest it in land.

His pleasant personality as well as his surveying skills earned him the everlasting friendship of the Fairfax’s. This proved to be most important in Washington’s moral and intellectual development.

Young George did not spend all his time between 16 and 20 in the wilderness. The years from 1740 until the French and Indian War were peaceful, prosperous and relaxed in Virginia, and he took full advantage of those years to hone his skills of getting along with people, and how to be a better gentleman. He developed a good sense of humor, became a good card player, and really enjoyed dancing with the ladies. He joined the Masonic Lodge at Fredericksburg and became friends with many important people.

From his close relationship with the Fairfax family he continued to develop his philosophy of life – – Simplicity of living – – A calm acceptance of life – – Duty to the Commonwealth – – Generosity to fellow man – ­Unwavering courage. One might say he embraced the Stoic philosophy:

Never evade life – face it
Never avoid responsibility – accept it
Not only believe in liberty – practice it.

This young George did and he made history.

When George was 20 his half brother Lawrence and he became proprietor of Mount Vernon. He also fell deeply in love with Sally Fairfax who would hold a special place in his heart until he died. Unfortunately, she was the wife of his friend, William Fairfax.

By age 21 he was commissioned a Major in the Virginia Militia. As such, he was sent on several confidential missions into Western Virginia and the Ohio wilderness by Governor Dinwiddie.

By the start of the French and Indian War in 1754, George had been promoted to Lieutenant Colonel. In fact, it was Washington that fired the first shot that started the War. He was defeated at Fort Necessity on 20 May 1754, but allowed to return to Virginia with his men. Colonel Washington was with General Braddock who was killed in the Battle of the Wilderness on 9 July 1755.

During the next couple of years he had charge of all the frontier defenses. At age 26, in 1758, he resigned his commission over a dispute with the Governor after the British capture of Fort Duquesne. The next time Washington would draw his sword would be 1775, which he did so reluctantly, having first had the experience the horrors of war.

1758 was an eventful year. Not only did he resign his commission, he married Martha Custis and was elected to the Virginia Assembly. Thus the veteran Colonel started his political education. His youth was over.