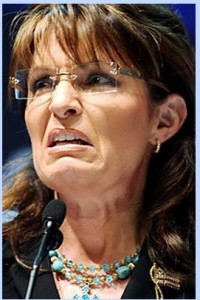 When Sarah Palin first hit the national political scene, what little credibility she may have had lasted about eleven minutes. Before the first Katie Couric interview was over, millions of people were pointing at her and laughing. By the time her run for the vice-presidency was over, she was the laughing-stock of the nation. Adding insult to injury, Palin quit her seat as Alaska’s governor and turned to a life of public appearances, conservative punditry and reality television.

Nearly a decade has gone by and Sarah Palin isn’t a single step closer to being someone more than a fringe few on the far-right actually respect. Her reality shows tanked, she was fired from Fox News and the most notable thing she has on her resume’ now is “shill for Donald Trump.”

That doesn’t matter to Palin, who refuses to just give up and go away. She continues to find new and innovative ways to make a fool of herself. Her latest move, however, may just take first place in the demolition derby of her dignity: She wants to be the next Judge Judy. That’s right, folks, if the deal she signed with a small production company out of Montana makes its way to the reality TV circuit, you’ll be able to have Sarah Palin determine if the law is on your side when your ex-boyfriend leaves and steals your cat.

There’s just one problem. TV judges may seem to be caricatures of someone you’d find in a real courtroom (except Wapner, he was BOSS!), but in all actuality, they have all held Juris Doctorates; they were, in fact, real judges. When determining winners and losers they had actual experience to rely on. They understood the law. They used that experience to ask questions, receive evidence and make decisions.

Sarah Palin doesn’t understand that Paul Revere wasn’t protecting the 2nd Amendment 14 years before it was written. She doesn’t get that Roe v Wade wasn’t the only court case ever heard by SCOTUS. She certainly didn’t understand the decision on gay marriage or the ramifications of allowing Kim Davis to go unpunished. How is she supposed to pull from her (lack of) wealth of knowledge to decide whether or not Roommate A needs to pay for the shoes chewed up by Roommate B’s puppy?

Even though TV court isn’t exactly serious business, the premise has always been the same: A retired judge will hear your case, weigh the evidence and with a harsh gavel smack and snarky attitude render a decision. In Palin’s court, you’ll answer to Sarah and to God as she references articles of law that don’t exist and sips vodka from a water bottle.

On second thought, maybe this is a GREAT idea.