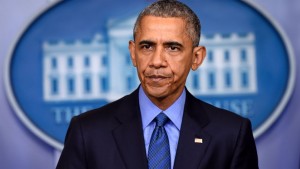 During a press conference in Buenos Aires on Wednesday, President Obama called out Republican presidential candidate Ted Cruz for his suggestion that Muslim communities should be put under surveillance, making note of the fact that this kind of policy was exactly why Cruz’s father had fled Cuba for America, the “land of the free.”

As far as what some candidates have said, I think I’ve been very clear on this. One of the great strengths of the United States and part of the reason we have not seen more attacks on the United States.

We have an extraordinarily successful, patriotic, integrated Muslim-American community. They do not feel ghetto-ized. They do not feel isolated. Their children are our children’s friends, going to the same schools. They are our colleagues in our workplaces. They’re our men and women in uniform, fighting for our freedom. And so any approach that would single them out or target them for discrimination is not only wrong and un-American, but it would also be counter-productive.

Because it would reduce the strength, the anti-bodies that we have to resist terrorism. As far as the notion of having surveillance of neighborhoods where Muslims are present, I just left a country that engages in that kind of neighborhood surveillance.

Which, by the way, the father of Senator Cruz escaped for America, the land of the free. The notion that we would start down that slippery slope makes absolutely no sense.

The Texas senator called for the monitoring of Muslim communities by law enforcement in the wake of the terror attacks in Brussels this week and has doubled down on his remarks even though he has been facing significant backlash for his comments.

Watch President Obama smack down Cruz and his disturbing suggestion that Muslim Americans should be put under surveillance just because of their religion: