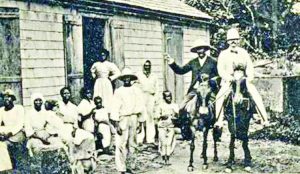 A long and complicated history of Scandinavian-Caribbean relations.

When you enter the British Library exhibition ‘Windrush: Songs in a Strange Land’, you are met by a fragment of Derek Walcott’s Nobel lecture. This fragment is about fragments: ‘Break a vase, and the love that reassembles the fragments is stronger than that love which took its symmetry for granted when it was whole.’  Walcott evoked these postcolonial ‘African and Asiatic fragments’ in Stockholm, delivering a riven Caribbean memory that may at first glance be thought unthreatening, perhaps exotic, to a modern literary society devoted to rewarding work of ‘greatest benefit to mankind’, and to a region that has ‘successfully maintained positions as champions of minority rights and mediators in global politics’ (Fur, 18). Look a little closer and you’ll find a long and complicated history of Scandinavian-Caribbean relations. We might stay with Walcott for another moment and his epic poetic biography of Camille Pissarro, Tiepolo’s Hound (YC.2001.a.13434), which begins:

They stroll on Sundays down Dronningens Street,
Passing the bank and the small island shops
quiet as drawings, keeping from the heat
through Danish arches until the street stops
at the blue, gusting harbour, where like commas
in a shop ledger gulls tick the lined waves.
Sea-light on the cod barrels writes: St. Thomas,
the salt breeze brings the sound of Mission slaves
chanting deliverance from all their sins
in tidal couplets of lament and answer,
the horizon underlines their origins—
Pissarros from the ghetto Braganza
who fled the white hoods of the Inquisition
for the bay’s whitecaps, for the folding cross
of a white herring gull over the Mission
droning its passages from Exodus. 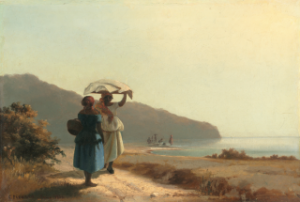 We are on St Thomas, one of the U.S. Virgin Islands in the Caribbean Sea, but at the same time we are not. Compressed into this dense image of island life are centuries of history and people—Danish, African, Creole, Sephardic Jew—so drenched in a rare sea-light that with each fresh and present vision history appears anew.  Indeed, Beatriz Llenín-Figueroa calls the poem a ‘sustained study of Caribbean light against History’ (p. 181), where History is a fixed discourse of the West wrought with uneven power dynamics. In contrast, Walcott’s focus on vision and a ‘blinding’ Caribbean light—hence the focus on painting—shows the ‘possibility for experiencing the Caribbean as if for the first time […] able to see otherwise, to find utter beauty, always in the present, in environments ravaged by “History”’ (p. 182). 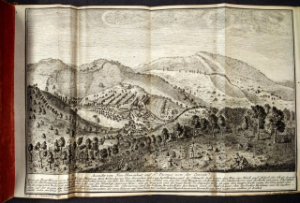 It is perhaps no coincidence then that the Det Kongelige Bibliotek in Copenhagen also chose to frame their 2017 exhibition on the centenary of the sale of the Danish West Indies to the U.S. in the language of light and vision. Blinde vinkler. Billeder af kolonien Dansk Vestindien (Blind Spots: Images of the Danish West Indies Colony) questions the neutrality of any Danish exhibition on its colonial past as the images produced and preserved in their collections ‘were [generally speaking] created by and for those in power’. A timely attempt to stage the partiality of colonial history, Blind Spots was accompanied by an online exhibition and a host of new digitized maps , images and newspapers. 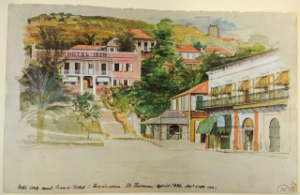 Denmark had a sustained presence in the Caribbean from the early 17th century and eventually the islands of St Thomas, St John and St Croix were colonised, the last island becoming part of the Danish realm in 1733.  A familiar story across the Caribbean, Danish profit was ‘extracted from fertile West Indian plantations of cotton and cane by the sweat of the negro’s brow’, in the words of an early 20th century historian (Westergaard, p.156). Hans West’s 1793 survey of the islands, Bidrag til beskrivelse over Ste. Croix, med en kort udsigt over St. Thomas, St. Jean, Tortola, Spanishtown og Crabeneiland (BL 979.g.28.), can be viewed online but perhaps of more interest is the report by Moravian missionary Christian Georg Andreas Oldendorp originally published in 1770, Geschichte der Mission der Evangelischen Brüder auf den Caraibischen Inseln S. Thomas, S. Croix und S. Jan (1777). The Moravians —otherwise known as the Evangelical Brethren amongst other names—did not view their task in the West Indies as one of enlightenment, the Black population being too “primitive” for understanding Christianity, and rather simply tried to get the Danish subjects to accept the grace of God. In this they were successful. In spite of such condescension, Oldendorp’s account contains significant “field work” including discussions with African-born slaves in order to understand the customs and traditions of the potentially convertible population.  [See A Map of the Danish Island St. Croix in the West Indies, Maps K.Top.123.74]

While Denmark passed a law to end the slave trade in 1792, it did not come into effect until 1803, and even then the end of the trade did not stop slavery itself, which continued on the islands until all unfree were emancipated in 1848. So in 1833, we still find in the Dansk vestindisk regierings avisnewspaper [BL MFM.MMISC419] advertisements for the sale of slaves. A curious publication that summarised European news in English and Danish while printing the everyday activities of the island administration, the Dansk vestindisk regierings avis could for example juxtapose, as we see in our 1833 issue, the sale of ‘Mulatto Man Johannes, a good House Servant and Coachman’ and the story of a Parisian man found dead in the Canal St Martin after having been outwitted by a cat he had indeed to drown in the same canal. The full issue can be read online courtesy of the above-mentioned digitisations. 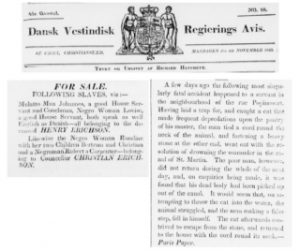 Peter von Scholten, Governor General of the Danish West Indies from 1827, was sympathetic to the cause of the Black population and strove for emancipation in his years in charge, although his actions were somewhat motivated by keeping the peace, caught between a ferment of slave unrest and, equally, an agitated planter class concerned for future profits in a slave-free society. The Library has an English copy of von Scholten’s ‘Orders for the regulation of labour conditions’ from 7 May 1838 [1850.d.26.(58.)], which exemplifies this balancing act on the path towards universal freedom. It contains an order to regulate the length of the working day and a reduction of discretionary punishment, although its severity hardly amounts to a reduction at all. 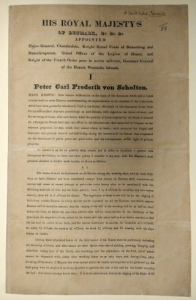 The 19th century saw the sugar trade diversify while the yield from the Caribbean suffered at various points due to adverse conditions. The benefits of the colonies were gradually outweighed and Denmark sought to sell them on, which it eventually—after many decades of trying—did in 1917 to the U.S.A for 25 million dollars. In 1917 Waldemar Westergaard also published The Danish West Indies under Company Rule [9773.ee.1.], a historical survey of the colonies before they were absorbed by the Danish state in 1755. In it he describes the slave trade as ‘loathsome to the modern mind’ (p. 137) and African slaves as ‘the chief agency that furnished the wealth, for the control of which European nations were willing to throw down the gage of conflict and usher in titanic wars’ (p. 156). 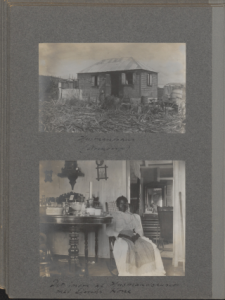 With that description in mind, we find a notable absence of such requisite condemnation in the introduction to The Danish West Indies in Old Pictures / Dansk Vestindien I gamle billeder[W55/9366], published 50 years later for the anniversary of the sale. The curator of the exhibition of the same name, which took place on the U.S. Virgin Islands in Spring 1967, writes instead:

‘It is a fact that most Danes still have a very soft spot in their hearts for the West Indies. Perhaps it is the dream, of heat and sunshine, palm trees and exotic flowers, white coral beaches, wealthy planters and a picturesque black population which appeals to our imagination. But for the most of us it will remain a dream. Very few have the chance of making their wishes come true and visiting the paradise on earth, as it seems to use dwellers in the frozen north.’

Slaves, later in the introduction, become simply part of the mechanics of island society without much lip service being paid to the idea of exploitation. Fifty years later, with last year’s Blind Spots exhibition at the KB, it might still be the same idealized vision on show but its inherent blindness and problematic perspectival gaps are simultaneously on the pedestal, to be interrogated, complicated and decimated by alternative visions in flux.

But, let’s finish where Walcott does, returning home from literal and figurative European and painterly explorations,

‘I shall finish in a place whose only power
is the exploding spray along its coast,
its rotting asphalt and cantankerous poor
numb beyond resignation and its cost,

And,
‘Let this last page catch the last light of Becune Point,
lengthen the arched shadows of Charlotte Amalie,