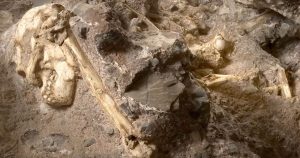 Reconstruction of ancient life and environments is an extremely challenging problem.

One of the major goals of palaeontology is the reconstruction of life on earth at specific times in the past. The major pieces of evidence that we can use to help with this process are the bodies and traces of the animals and plants that are preserved as fossils within the rocks from the various geological epochs. However whilst this tells us about the shapes of past organisms we need to use other approaches to more completely understand what these organisms were like. Synthetic palaeontology attempts to rebuild fossils as living creatures, most commonly as in silico simulations at either the organismal or population level, and can be used to directly test hypotheses about extinct animals. Examples include discovering at what point in human evolution our ancestors started to walk in a fully upright fashion, and deciding whether or not the largest of the predatory dinosaurs, Tyrannosaurus rex, was a pursuit hunter. Multi-physics, multi-objective simulation approaches allow evidence from a range of sources to be brought together and provide concrete predictions that can often be ground-truthed using comparative work on modern animals. Ultimately we will be able to model whole ecosystems and this will maximise the predictive power of the available evidence and help answer some of the major questions that we have about the evolutionary narrative of life on earth. 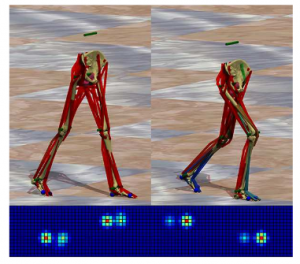 Figure 1: Comparing the footprints produced by bent-hip, bent-knee walking with those from upright walking using a (Australopithecus afarensis) simulation

Reconstruction of ancient life and environments is an extremely challenging problem since it relies on a relatively incomplete information source: the fossilised bodies and traces of plants and animals. Synthetic approaches in palaeontology offer two main advantages for interpreting
and recreating fossil species. Firstly they allow the incorporation of multiple lines of evidence within a consistent framework that can be used to directly test existing hypotheses about the fossil(Sellers et al., 2010). This can be extremely useful because individual lines of evidence can be contradictory or have limited discriminatory power. Secondly it requires us to establish a specific model and this in turn requires us to specify all the individual parameters for the model. This step forces us to address all the individual components of the model and to identify both the function and the levels of uncertainty associated with each component. Whilst this has a tendency to produce rather high levels of uncertainty in our predictions, it also allows us to perform sensitivity analysis to identify exactly where this uncertainty is coming from (Sellers and Crompton, 2004) (Bates et al., 2010) and hence helps us directly understand what factors are most important in deriving the output of the model, and can be used to direct future research that may be able to better define the most important parameters.

The first demonstrates how a major question in palaeoanthropology can be addressed using evolutionary robotics approaches. All the great apes (our closest relatives) can walk bipedally but do so without fully extending their knee and hip joints whereas humans have a fully upright gait and this is classically considered to be associated with the emancipation of the forelimb and the development of advanced tool use as well as the associated cognitive advances (Watson et al., 2009). It is therefore vitally important to know the timing of this behavioural change and there is considerable argument in the literature about whether upright walking occured early or late in the human lineage. To answer this question we created a simulation of a key early hominin fossil (AL288-1 aka “Lucy”) which could perform both chimp-like and human-like gaits and compared the pressure profile under the feet with the depth profiles of the fossilised hominin footprints found at Laetoli (see Fig.1). The results showed fairly conclusively that human ancestors walked in a fully upright fashion 3.6 million years ago (Bates et al., 2013). 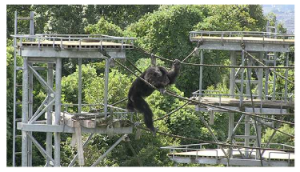 It is important to ground truth simulations as much as possible so we combine modelling with as much actual data as we can. However this often requires us to work with exotic animals that we cannot work with in the laboratory. Zoos are usually happy to allow their animals to be filmed for
kinematic analysis but we often have problems with both calibration (since we often cannot get into the enclosures), and commonly we want to record kinematics in three dimensions. We have therefore developed a flexible video photogrammetry system that allows us to obtain accurate 3D measurements in a wide range of conditions (outside or inside, short or long range, high or low speed) calibrated entirely from the camera separation (see Fig.2) and this can be used to obtain the necessary data to validate modelling approaches (Sellers and Hirasaki, 2014). 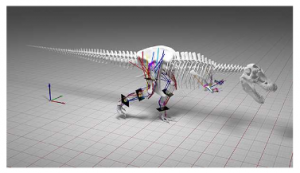 Figure 3: Calculating the long bone stresses in a running simulation of Tyrannosaurus rex

When reconstructing locomotion it is generally assumed that the animal is either attempting to maximise economy or speed but with more sophisticated models this does not always lead to believable answers (Sellers et al., 2009) (Sellers et al., 2013). The locomotor system in most animals is not a single function organ and it has to cope with a range of performances and their associated control and mechanical issues. We have therefore been experimenting with both
multi-goal and multi-physics simulations to improve our outcomes. In a recent example we have combined multibody dynamic analysis with skeletal stress analysis to improve our estimates of the likely top speed of the Tyrannosaurus rex. The study shows that running speeds would have generated unacceptably high skeletal loads and that this animal would have been limited to walking gaits (Sellers et al., 2017).

Synthestic palaeontology allows us to maximise the information content of the fossil record and integrate data from a variety of sources. It can directly test hypotheses, and often requires a much more detailed specification of the problem, the model that is being used and the underlying parameters. Our work is primarily limited to studying individual species currently but ultimately synthetic, world-building approaches are an ideal way to fill the inevitable information gaps in palaeontology and will allow us to create the most accurate reconstructions of the ancient life on earth.

From Proceedings of the ECAL (09.04-08.2017), published by the Massachusetts Institute of Technology under the terms of a Creative Commons Attribution-NonCommercial-NoDerivatives
-4.0 license.