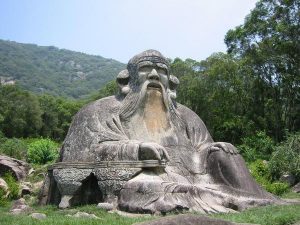 A stone sculpture of Laozi, located north of Quanzhou at the foot of Mount Qingyuan / Wikimedia Commons 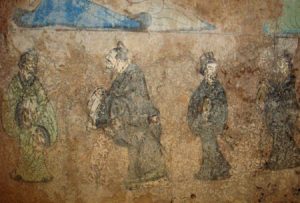 If Confucianism is a system concerned with the social and communal elements of Chinese society, then Taoism is its exact opposite: this tradition is intimately concerned with private spiritual vision and attainment, with cosmology and metaphysics.

Traditionally, its historical founder was “the old teacher” (Lao Tse, or sometimes Lao Tzu or Li Tzu – the latinisation Laocius never did catch on) who supposedly was a slightly older contemporary of Confucius and wrote a book known as Tao te ching (“The way and its power”, sometimes just called “the Lao Tse” after its founder).

Modern scholarship is all but unanimous that there never was such a person, that the name “old teacher” was a generic title for a sage, and that the Tao te ching is a compilation from different sources.

The same argument applies to the Taoist contention that its real founder was Huang Ti, the mythical Yellow Emperor (r. 2697-2597 BCE). The other great Taoist figure, Lao Tse’s successor Chuang Tzu, is almost as obscure as the old teacher himself. As you might suspect “Taoism” is a western term the Chinese name for it is Huang Lao, thus honouring both the supposed founders. 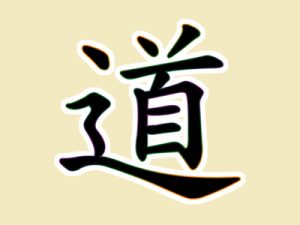 The central concept in Taoism is that of Tao, the way. The Taoist saw nature as an ever-dynamic, intrinsically undifferentiated void, a “vast and timeless ocean of spotless purity upon which, through the interplay of dark and light, a myriad illusions play like ever-changing cloud formations or restless waves . . . ” (Blofeld 1979:1).

In other words, it plays, roughly and functionally speaking, the same role in Taoism as the god-concept does in the Semitic religion or concepts like dharma in the Indian. Tao is the impersonal, dynamic ground of being. But it is not radically separate from reality as we know it: indeed, besides constituting the ground of being, Tao is also being itself.

Literally, the word means “way” or “road”, and the Chinese ideogram for Tao shows a stylised picture of a foot above a flat surface. This indicates that Tao should never be thought of as a static, primordial “entity”, and Aristotelian “unmoved mover”. Tao is the quicksilver essence of a universe that is intrinsically alive. But it is mysterious: “The Tao that can be told of is not the Absolute Tao” (Lao Tse, quoted in Welch 1966:51).

“Lao Tzu tells us that “Tao” (Way) is just a convenient term for what had best be called the nameless. Nothing can be said of it that does not detract from its fullness. To say that it exists is to exclude what does not exist, although void is the very nature of the Tao. To say that it does not exist is to exclude the Tao-permeated plenum. Away with dualistic categories. Words limit. The Tao is limitless. It is T’ai Hsü (the Great Void), free from characteristics, selfexistentself-existent, vast beyond conception, yet present in full in a tiny seed.. It is also T’ai Chi (the Ultimate cause, the Mainspring of the Cosmos). It is also T’ai I (the Great Changer) for its changes and convolutions never cease. Seen by man with his limited vision, it is also T’ien (Heaven), the source of governance and orderliness. It is the Mother of Heaven and Earth, without whose nourishment nothing could exist.” (Blofeld 1979:3).

But within this non-dualisticc reality, two primordial subrealities are constantly interacting: the yin and yang. These concepts, although only formalised by the yin-yanggg “school” in the first century CE, might well predate Lao Tzu, for they form the basis of the much older I Ching (Book of changes), a book of oracular pronouncements which was and still is used by the Chinese to understand the present and forecast the future.

Yin represented everything cool, dark, female and passive, while yang represented all things hot, light, male and active. In theory at least, neither of these is superior to the other both are equally necessary to the maintenance of creation. If one could achieve a perfect balance between these two qualities within oneself and flow along with the cyclic ebb and flood of the cosmos, one would be fully in accord with the Way. Accordingly, one would then have all knowledge and wisdom within one’s reach and need never die.

From this stems the Taoist interest in achieving immortality, though whether this was meant literally or in a spiritualised sense is a debatable point. This immortality would become a major theme in later developments of the tradition and would result in the development of Taoist forms of alchemy and various contemplative practices.

We are told that this dynamic balance is attained through wu wei, or inaction. But this is a rather special kind of doing nothing. Wu wei is a golden mean between action and inaction. It is spontaneous action: an action which arises from the inner atunement to the Way, rather than from reflection and rational thought. Action produces reaction in an endless series. Like water carving a canyon from solid rock through no effort of its own, but solely through the universal force of gravity, the Taoist sage humbly and compassionately” . . . causes others to want what he wants” (Welch 1966:22, cf. 2021). Thus, it is a “doing by nondoing” (wei wu wei). Those among you who are familiar with Mahatma Gandhi’s policy of passive resistance will no doubt see the similarities. 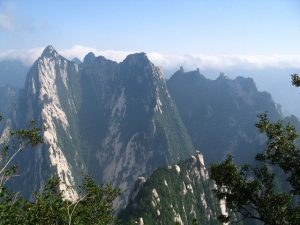 The ideal saint of philosophical Taoism was one who left society and dwelt in the mountains, there to act spontaneously and develop an attunement to the Way. But others were also attracted to the teaching who were less inclined to reject the strictures of Confucian orderliness. Naturally, their adaptation of Taoist thinking differed from that of the ancient sages. Complicated ritual, alchemical potions and specific sexual practices were all thought to alter the balance of yin and yang, thereby leading to longevity, the layperson’s equivalent of the immortality sought by the sages.

To a large extent, popular Taoism merged with the worship of the Chinese pantheon that has already been mentioned in connection with Confucianism. Today, Taoist priests in Taiwan are still much sought after for conducting exorcist and funerary rites.

THE INFLUENCE OF TAOISM 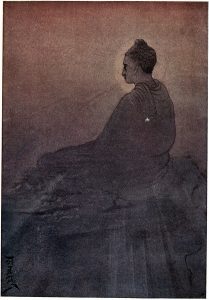 Frontispiece The Victory of Buddha by Abanindranath Tagore, 1914, oil on canvas / Wikimedia Commons

The Taoist religion has not become popular outside its original Chinese home in its own right, but is nevertheless well known in the west through the many translations of Tao Te Ching. Welch (1966:164 ff.) has written some trenchant comments on the shortcomings that the Taoist might see in western society and the benefits that would accrue from adopting a more Taoist stance towards our life. Its influence on Oriental culture has been vast.

Chinese and Japanese forms of Buddhism received an indelible Taoist imprint, as can be seen in the Zen Buddhist koan, an apparently self-contradictory or meaningless statement to which the student is expected to react spontaneously. On the philosophical level, too, the Taoist concept of the way as something that cannot be attained, since it is not something that can be lost, influenced the development of the distinctively Chinese understanding of the Buddha-nature concept in T’ien T’ai and Hua-yen Buddhism.

A blend of Taoist metaphysics and Confucian ethics, called neoConfucianism, eventually came into being. Thus, in its own terms, the terms of self-effacement and going with the flow of events, Taoism can be seen as a success story among religions.

Welch, Holmes 1966. Taoism. The Parting of the Way. Boston: Beacon.