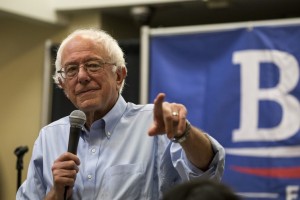 Bernie Sanders is speaking at the National Press Club in Washington, D.C., as of this writing, addressing the progress his campaign has made since it began a year ago and the admittedly “…delicate math and path toward victory” that he sees.

The Senator said that last year he was trailing Clinton by 60 points or more in most national polls.

“That was then,” he said, “and today is today.”  He emphasized that he is now leading her in most national polls, and it others tied or only single-digits behind.

He acknowledged a campaign larger than himself, saying, “What the political revolution has shown is that we can run a strong, winning campaign..without being dependent on big money interests.”

Sanders pointed to the strong turnouts at his rallies thus far, saying they have thus far brought out over 1.1 million people with more rallies scheduled in California.

He acknowledged that the vast majority of his support comes from those aged 45 and younger and said, “The ideas we are fighting for are the future of the Democratic Party and in fact the future of this country.”

Senator Sanders today pointed to the incredible progress his campaign has made, how that progress has been made, and how he sees a path to victory with the future of the party behind him.