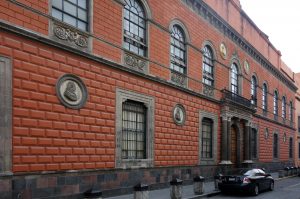 Site of the Academy of San Carlos in Mexico City since 1791 (photo: Steven Zucker)

From its beginnings in the sixteenth century, the Viceroyalty of New Spain had been home to many accomplished artists. Some of these were Amerindian artists who used their knowledge of sculpture and graphic arts to produce works for conventos and codices; others, were of Spanish birth or heritage and worked mainly in the tradition of European painting and sculpture. By the eighteenth century, this European-based tradition had gained enough popularity and renown in New Spain that prominent artists such as Miguel Cabrera began to advocate for the establishment of an official art academy in Mexico City.

Spain established the Academy of San Fernando in 1752 in Madrid—an official art school that, like art other academies across Europe, was designed to train artists in drawing, painting, and sculpture. This became the model for the earliest art academy in the Americas—the Academy of San Carlos in Mexico City, founded in 1785 under the leadership of Spanish engraver Jerónimo Antonio Gil (see medal above). Most of the faculty members were, like Gil, of Spanish descent, and the artistic lessons promulgated at San Carlos were likewise similar to those taught at the Academy of San Fernando across the Atlantic Ocean. 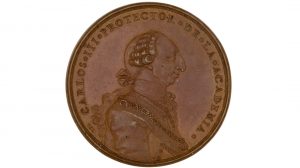 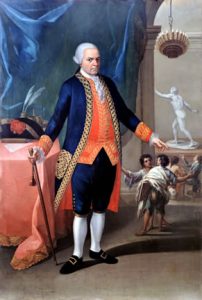 Gil developed an arts curriculum that included engraving, sculpture, painting, and architecture. As in the European academies, all students began their artistic education by first drawing from two-dimensional models (prints and drawings) and then progressing to three-dimensional examples, often plaster copies of classical statuary such as the Nike of Samothrace, which later decorated the courtyard of the Academy of San Carlos (this sculpture was excavated in 1863 but illustrates the use of casts of antiquities for study at the Academy). The collection of copies of classical sculpture—allude to the fact that art instruction at the academy was centered on Neoclassicism, a style of the late-eighteenth and early-nineteenth centuries that sought to emulate the classical art of ancient Greece and Rome. A distinguishing characteristic of Neoclassicism, and one that paralleled the artistic vision of Gil, was the crisp delineation of form, which placed an emphasis on line rather than color (hence the academy’s focus on drawing in the curriculum). The recent archeological discovery of ancient Roman sites such as Herculaneum and Pompeii inspired both the interest in the classical (ancient Greek and Roman) style as well as moralizing subjects about patriotism, nationalism, and courage—ideals founded in 18th century Enlightenment philosophy that helped inspire the Mexican independence movement.

Art Education in a Colonial Context

Andrés López’s Portrait of Don Matías de Galvez y Gallardo as Vice Protector of the Academy of San Carlos provides a view of the school and its students, as much as of its director, the Viceroy of New Spain (a viceroy rules a colony on behalf of a king), whose portrait it shows. While the Viceroy commands the viewer’s attention in the foreground, one cannot help but be distracted by the background where we see two mestizo children in tattered clothes make their way towards the background where drawing students measure a classical sculpture in order to faithfully render it on paper. What this scene implies is that, through attendance at the Academy, unruly children are transformed into disciplined students, from provincial artisans to sophisticated artists. Additionally, by depicting the Viceroy as pointing towards the two children, the López alludes to the mission of the Academy—to educate and professionalize artists, including those of mixed heritage. This depiction of unruly mestizo children also serves as a reminder that the goal of the Spanish colonizers in Latin America was to “civilize” the indigenous population in all aspects of daily life—including religion and art. 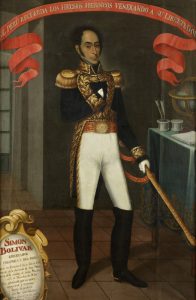 Students at the Academy of San Carlos were not only transformed into artists; they were also made more cosmopolitan, since their education was formally aligned with Europe. However, this cosmopolitanism was not a simple adoption of European ideas and techniques. The art historian Maria Fernández writes that “far from passively absorbing and naively imitating European trends, Mexican cosmopolitanism in the visual arts manifests as active exchanges: adaptations, translations, innovations, and deliberate contestations of European hegemony.”1 Latin American artists, whether trained at the academy or abroad, did not passively imitate international trends, but rather adapted and localized them.

In portraiture, such as in Gil de Castro’s Portrait of Bolívar in Bogotá, as well as in history painting, Neoclassicism was considered the academic style par excellence. As in Europe, Neoclassicism allowed Latin American artists to address nationalist values that were rooted in the present yet informed by the classical past. Mexican painters such as Juan Cordero, who had trained at the Academy of San Carlos and in Rome, adapted quickly to this new mode of representation. In 1850, while in Italy, Cordero painted Christopher Columbus at the Court of the Catholic Monarchs, shown at the 1851 exhibition of the Academy of San Carlos.Columbus Before the Catholic Monarchs was a turning point in the career of Cordero and in the history of Mexican art, and became one of the first paintings by a Mexican artist to depict a scene from colonial history. 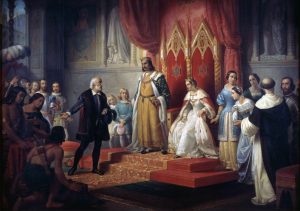 In 1869, director Ramón Alcaraz introduced a prize in the category of history painting for the exhibitions held at the Academy of San Carlos. Indigenous subjects dominated the genre of history painting until 1881 in large part due to the restoration of the Republic in 1867 and the triumph of Mexico’s first indigenous president, Benito Juárez. In Félix Parra’s Episodes of the Conquest: Massacre of Cholula, the Spanish conquest is not depicted in the context of discovery, as it was in Cordero’s work, but rather in the context of tragedy. Parra documents the bloody execution of the residents of Cholula by the Spanish conquistador Hernan Cortés, who stands proudly at the center. As Cortés’s men plunder the city of Cholula, exemplified by the figure at the right who greedily examines an object of value, the remaining victims try to save themselves and their families. A woman at left leans over her child, perhaps dead, in order to reach her deceased husband, who lies on his back with his arms outstretched, recalling the martyred image of Jesus on the cross. 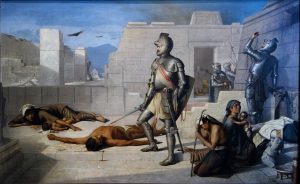 On the other hand, José Obregón’s The Discovery of Pulque is entirely indigenous in subject matter, documenting an event that took place before the time of the Spanish Conquest. Obregón depicts a young woman, Xochitl, offering pulque, a viscous alcoholic beverage made of maguey plants, to the Aztec Emperor Tecpancaltzin, shown seated on his throne. A woman at the far left holds the actual maguey plant, considered sacred to the Aztecs. She and her companions appear humble because of their tattered clothes and subjugated poses, while the men to the right of the composition, surrounding the Aztec emperor, are clearly of a higher status, as reflected in their feathered headdresses. 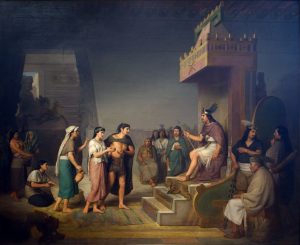 In keeping with his interest in classicism, Obregón depicts the scene according to the principle of “noble simplicity and quiet grandeur” which the German art historian Johann Joachim Winckelmann articulated in Reflections on the Painting and Sculpture of the Greeks in 1755. Rather than portray the figures in this history painting with dramatic gestures, as might befit such an event, the artist depicts the calm and serene poses typical of classical art. Yet by classicizing Mexico’s pre-Hispanic past, Obregón Europeanized his indigenous subjects demonstrating his adaptation rather than imitation of European trends.

Obregón’s The Discovery of Pulque is further fictionalized, since this drink was known to Mesoamerican cultures before the Aztecs. By presenting the beverage within the context of discovery, Obregón’s painting speaks to European interest in innovation, invention, and exploration. Nevertheless, by representing the Aztec as the cultivators of maguey plants and creators of pulque, Obregón counters the prevalent iconography of the era that commonly depicted the Spanish, not the indigenous people, as “discoverers” and “creators,” as seen in Cordero’s Columbus Before the Catholic Monarchs. 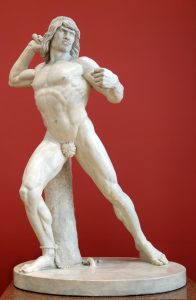 The Spanish-born sculptor Manuel Vilar also capitalized on the glorification of the indigenous people, as seen in his larger-than-life size sculpture, The Tlaxcalan General Tlahuicole Doing Battle on the Gladiator’s Stone of Sacrifice. Captured by the Aztecs during a flowery war against Tlaxcala, Tlahuicole was taken prisoner; however, after defeating various warriors, he was pardoned and asked to join the Aztec army. Tlahuicole declined the offer and instead accepted his fate in a ritual sacrifice. Depicted in a heroic and idealized state, as noted by his firm stance and idealized body, Vilar adheres to a style of Neoclassicism that he also helped to disseminate at the Academy of San Carlos.

Though artists from New Spain were educated in the latest European trends and techniques at the newly-established Academy of San Carlos, their works nevertheless exemplify a range of solutions to the challenge of representing the complex history and context of New Spain. Interestingly, they achieved this through a complex synthesis of both local and global influences, demonstrating the continuing development of Mexican cosmopolitanism.