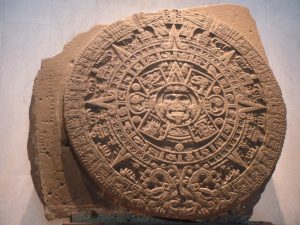 The Aztecs dominated the Valley of Mexico for 100 years, until their downfall at the hands of Hernan Cortez and his conquistadors in 1521.

A Kingdom of Blood

The capital city of the Aztecs, Tenochtitlán, was an engineering masterpiece. Aqueducts and canals snaked through the city, channelling pure water to possibly 200,000 inhabitants each day.

In 1978, while digging in the basement of a bookstore, workers for Mexico City’s power company hit a huge stone disk. Almost 11 feet across, engraved on its surface was the dismembered body of Coyolxauhqui, the Aztec moon goddess. In the center lay her torso, naked but for a belt of snakes. Around the edges were scattered her severed arms, legs and head. She had been slain and cut to pieces by her brother Huitzilopochtl moments after his birth.

Huitzilopochtl, God of the Sun, was the Aztec principal god. He had an insatiable appetite for blood. Under his urging, the Aztecs rose from a band of primitive farmers to become the bloodiest civilization of the early Americas. Many Central America cultures indulged in human sacrifice. The Aztec practiced it on an industrial scale, sacrificing tens of thousands of victims each year. 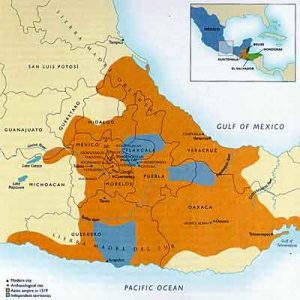 The Aztec empire of 1519, shown in orange, ruled over vast expanses of central Mexico.

The Aztecs dominated the Valley of Mexico for 100 years, until their downfall at the hands of Hernan Cortez and his conquistadors in 1521. They built their capital in the most unlikely of places — the center of a lake. Tenochtitlan was a city surrounded by water, with temples and pyramids — sparkling white monuments and ceremonial squares gleaming in the tropical sun. It sat in Lake Texcoco, criss-crossed by canals and connected by three broad causeways to the shore. Along the lake edge the Aztec created chinampas, or raised fields of rotting vegetation and lake-mud. Extraordinarily fertile, they yielded many crops per year.

One story central to the Aztec belief system was the tale of their origins. Aztecs believed that one day while doing housework, the ancient Earth goddess Coatlicue (Serpent Skirt) was impregnated by a ball of feathers. Coyolxauhqui and the 400 stars of the southern sky, her children of the night, grew jealous and determined to kill her. They sliced off her head.

Her unborn child, Huitzilopochtl, learned of the plot. He leapt from her body fully grown. In his hand he brandished a club lined with slivers of razor-sharp black volcanic glass called obsidian. He chopped up Coyolxauhqui and her brothers — a metaphor for the way the sun overwhelms the moon and stars when it rises at dawn each morning.

Huitzilopochtl commanded the Aztecs to travel south until they found a cactus with an eagle nesting in its branches. After many adventures and much misery, they discovered an island with a prickly pear cactus in the year 1 Flint (1324 AD). Sitting upon it was an eagle with outstretched wings and a snake held tightly in its talons. This became the site of Tenochtitlan, now Mexico City. The Aztecs believed the oval red fruit of the cactus symblolized the human heart. Today an eagle, cactus, and snake are the national emblems of the Republic of Mexico.

Rise and Fall of an Empire

Within 50 years of founding Tenochtitlan, the Aztec had extended their rule all across the valley. They formed political alliances with other states, skillfully intermarried with their nobles, and fought tenaciously in battle. Their empire was created by a culture of war. Boys were taught from an early age to be warriors. A warrior who captured four or more prisoners could become a Jaguar or Eagle Knight, and wear brightly colored body-suits of feathers. Girls were prepared for the battle of childbirth. Women who died in labor became goddesses, accompanying the sun across the sky each day from noon until sunset. 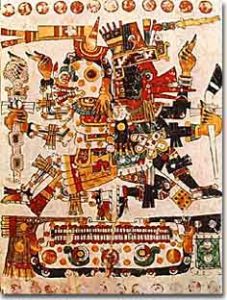 Quetzalcoatl was the most influential god of the Aztec religion. Called the “Feathered Serpent of Ancient Mexico,” he was claimed to have invented fire and discovered maize, the staple food of the Aztec people.

By 1519, the Aztec cycle of conquest and exploitation was at its peak. More and more conquered peoples provided tribute, the basis of the Aztecs’ immense wealth. More and more prisoners were captured for human sacrifice. Conquistadors were astonished by Aztec marketplaces. They found dealers in gold, silver and precious stones. They saw embroidered clothing and cotton goods and cacao beans for chocolate drinks. Jaguar pelts and deerskins, as well as the brilliant blue plumes of the cotinga bird lined the marketplace. Food included vegetables and fruits, turkeys, young dogs, wild game and many kinds of honey. There were sellers of tobacco, liquid amber, and herbs. All this and more poured into Tenochtitlan. At the same time, the conquistadors heard tales of the day 20,000 captives, some roped together through their noses, wound through the streets to be sacrificed at the top of the Great Temple steps.

Within two years, the Aztec culture was destroyed by the Spanish. Tenochtitlan lay in ruins. There would be no more human sacrifices. And, as the Aztec feared, without life-sustaining blood their gods deserted them and darkness descended on their cosmos.