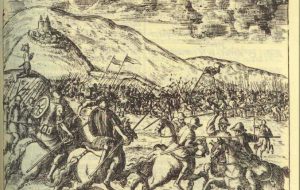 The battle marked the end of the internal conflict in the Roman Empire and the solidification of Christianity.

The battle on the Frigidus River is a battle in the eastern Alps between the army of the Eastern Roman Empire under the command of the Emperor Theodosius the Great and the army of the Western Roman Empire under the Emperor Eugenius on September 6, 394. The battle was the end of the internal conflict in the Roman Empire, which arose in 392 as a result of Eugenius seizing imperial power in the western part of the Empire. During the battle, the usurper Eugenius was captured and executed by order of Theodosius, who after that became the sole ruler of the entire Roman Empire.

The Emergence of Conflict

On May 15, 392 in the Gallic city of Vienne, Emperor of the Western Roman Empire Valentinian II died. According to one version, he committed suicide, and on the other more widespread version, he was killed by the commander of his guard, Arbogast. The throne of the Western Roman Empire was vacant for 3 months. Under the established order, the Emperor of the Eastern Roman Empire, Theodosius became the legitimate successor of Valentinian, having the authority to appoint a new Emperor co-ruler in the West. However, on August 22, 392, Secretary Eugenius was proclaimed Emperor without the approval of Theodosius.

Given the strong army under the command of Arbogast the friend of Eugenius, the civil war between the Eastern and Western Roman Empires did seem inevitable. No less significant factor was the religious policy pursued by Eugenius, who unlike the Christian Theodosius contributed to the revival of paganism in Italy.

On September 6, 394 in the foothills of the eastern Alps on the Frigidus River in modern Slovenia, on the border with Italy, a general battle took place. In some publications, there is an assertion that the battle lasted 2 days, in all other sources, the description of the battle fits within one day.

Theodosius had readied the soldiers in the front ranks under the leadership of Gaina, and after them, he sent other barbarians to try to crush the enemy with their fast fighting. A very fierce battle began. In the course of the battle against the forces of Eugenius, a natural phenomenon intervened, the wind from the frosty North defeated the enemy with a great and strong storm. Some attributed the storm that rose after the night prayer of Theodosius, to the will of the apostles.

Despite the divine weather assistance, the advanced detachment of the troops of Theodosius of 10 thousand men was completely exterminated by Arbogast. The general Feodosiya was also killed. When, with the onset of darkness, the battle ceased, Emperor Eugenius began to distribute awards to distinguished soldiers. The army of Theodosius was trapped, the detachments of Arbogast, who occupied the mountain heights in its rear could prevent the retreat of the army of Theodosius.

The situation for Theodosius was critical, only treason in the troops of Eugenius broke the course of events. At the end of the day, in the darkness, the soldiers of Theodosius attacked the hostile enemy. They managed to break into the usurper’s camp and to his tent. Eugenius himself was captured and immediately beheaded. His head on a spear was shown to his troops, who for the most part went over to the side of Theodosius with requests for forgiveness. Arbogast fled to the mountains, soldiers followed him, then he stabbed himself to escape captivity.

Consequences of the Battle

Emperor Theodosius for a few months became the sole ruler of the entire Roman Empire. Before his death in January 395, he managed to appoint his son Honorius the emperor of the Western Roman Empire, entrusting him to the protection of his commander Stilihona. Stilichon, first manifested in the battle of Frigidus, became commander-in-chief of the troops of the Western Roman Empire and successfully restrained the attacks of the barbarians on the Empire at the beginning of the fifth century. 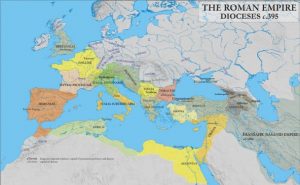 The victory of Theodosius in the battle on the Frigidus River finally determined the direction of the religious development of Western Europe. Attempts by the Roman aristocracy to restore the pagan religion in Italy failed. The troops of Eugenius and Arbogast fought under the banners with the image of the pagan god Hercules, and victory over them symbolized victory over paganism. The already strong positions of the supporters of the Nicene Creed (Orthodoxy) in Christianity were strengthened in the West. Although the publications state that the troops of Theodosius carried banners with the image of the Christian cross, Claudius Claudian, an eyewitness, depicted the soldiers of Theodosius upon entering Rome under badges with soaring eagles and banners with embroidered dragons and snakes.

In the battle of Frigidus, in the troops of Theodosius also participated the Goth Alaric, who a year after the battle was elected leader of his people in Thrace and Moesia. Goths under his command raised an uprising against the Empire, one of the reasons for this, historians believe, was the possible discontent as a result of heavy losses on the Frigidus. Soon Alaric faced battles with a former associate Frigida Stilihon.

The fate of the generals who fought for Theodosius, and who won the Frigidus, was tragic. Timasii after the death of Theodosius was exiled; Goth Gain became commander-in-chief of the Byzantine army but overthrown and killed in 400, the chief of the Alan cavalry Saul died in the battle of Pollenzia in 402, and Stilichon was executed in 408. This battle marks one of the turning points in the Roman history, Rome was becoming a Christian state.