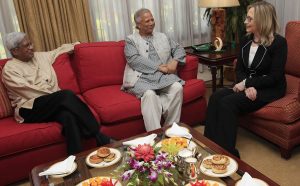 If not for Donald Trump collapsing like an underfunded building project, Hillary Clinton would be in a world of trouble. So far she is surviving another corruption scandal that reinforces the criticisms that have been leveled at her. The latest scandal is being overshadowed by Trump’s calamitous dog-whistle to his Second Amendment people.

The Clintons were in middling financial condition upon taking office in 1993. Thanks to book advances, they were flush upon leaving it in 2001. The Clintons were forced to return some government property taken when they left the White House. They did get to keep the “For Sale” sign they’d hung on the door of the Lincoln Bedroom.

Now, they are truly wealthy. The wealth comes primarily through the Clinton Global Initiative (CGI), whose benefits are indirect as far as is presently known. and speaking fees, which often coincide with CGI business. You don’t get rich on a government salary.

On Bill Clinton’s last day in office, he issued a pardon to Marc Rich, a fugitive who had amassed great wealth by trading illegally with America’s enemies: Ayatollah Khomeini of the Islamic Iranian Republic, Muammar Gaddafi of Libya, Slobodan Milosevic of Serbia, and Kim-Jong Il of North Korea. Rich, who died in 2013, and his wife had donated almost $1.5 million to the Clinton campaign and Presidential Library. Democrats and Republicans alike were scandalized by the pardon.

Many suspected that cash from Rich and his friends continued to flow into the Clinton coffers long after the pardon. His colleague Gilbert Chagoury, convicted in Nigeria of money-laundering, surfaced in the emails made public yesterday. In 2009, Doug Band, the former President’s body man and a Clinton Global Initiative aide, sought assurances from the State Department that Chagoury would get special treatment, being introduced to a person of substance at State. The Clinton Global Initiative, now in its second decade of operations, collected at least $1 million from Chagoury over the years. It gets worse. There are other deals involving uranium assets and oil.

The FBI requested DOJ investigation of Clinton, CGI and Dr. Muhammad Yunus over a year ago. The truth as to the allegations against Yunus and his Grameen Bank are disputed. What is incontestable is that the State Department facilitated a package of financial benefits for Dr. Yunus through an array of U.S. government agencies and that Dr. Yunus made a contribution of between $100,000 and $300,000 to the Clinton Global Initiative.

So far, there is no smoking gun or quid pro quo in these email revelations. Hillary Clinton has skittered along the edge of the law for nearly 25 years. It’s no longer possible to dismiss all accusations of corruption as the work of a right-wing conspiracy.