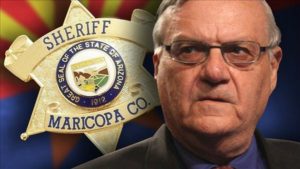 Two days ago, a poll from the Arizona Republic/Morrison/Cronkite News had Democrat Paul Penzone beating out Republican Joe Arpaio for the office of Sheriff of Maricopa County, Arizona. Arpaio, who is seeking his seventh term, has branded himself America’s “toughest” sheriff.

He also has a reputation for being a lawless thug who uses racial discrimination to crack down on illegal immigration.

In just two days, Arizonans have gone further with their dissatisfaction with America’s “toughest sheriff.”

A brand new poll from the Arizona Republic/Morrison/Cronkite News, released early Thursday, shows Democrat Paul Penzone’s lead growing astronomically. In just two days, Penzone has gone from a 10 point lead to a 15 point lead over Arpaio, 46 to 31 percent. Penzone skyrocketed in the polls after reports surfaced that federal prosecutors will charge him with criminal contempt after a judge recommended the charges stemming from a racial profiling case – in which the court found Arpaio and his posse willfully disobeyed the court’s order not to racially profile.

In August, a poll conducted by Cronkite found that 57.3 percent of registered voters in Maricopa county either found Arpaio “unfavorable” or “very unfavorable.” That was before it was announced that federal prosecutors would be charging him for breaking the law.

The same poll released on Thursday also shows that 68 percent of Arizonans do not agree with deporting every illegal immigrant living in the state.

Arpaio was first elected sheriff in 1992 and has won every election since. However, every election has shown Arpaio losing support. In 2000, Arpaio won with 65 percent of the vote. In 2012, the last election, he barely clinched a majority, just passing the 50 percent mark.

Never before has a Democratic challenger surpassed Arpaio in the polls. Considering Clinton has a real shot at winning Arizona, and the two most recent polls show Arpaio losing by double digits, Arizona may become just a little bluer than ever before.

And what a big F-You that would send to Trump’s xenophobic, racist movement. Losing the state affected by illegal immigration the most and sending it’s most ardent racist home with it. Forty-four percent of residents in Maricopa county do not support “the wall” Trump and Arpaio want to build, while only 13 percent do.

Arizona, get ready to say goodbye to Joe Arpaio!