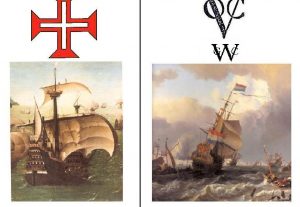 The Dutch-Portuguese war was an armed conflict in the 17th century, in which the Dutch East India Company and the Dutch West India Company fought throughout the world against the Portuguese Empire. The war was fought simultaneously with the Eighty Years’ War raging in Europe, in which the Netherlands fought for its independence from Spain (in the dynastic union with Portugal), but cannot be considered a part of it, as it continued even after Portugal regained its independence in 1640. In a number of instances, the Dutch were helped by the British. As a result of the war, Portugal was the winner in South America, and the Netherlands in the Far East. England won due to the long confrontation between its two main trading rivals.

In 1592, during the war with Spain, the British seized Portuguese goods in the Azores area, about 900 tons of goods from India and China worth half a million pounds (almost half of England’s national wealth at that time). This event aroused interest in the East.

In the same year, Amsterdam merchants sent Cornelis de Houtman to Lisbon with the task of collecting as much information as possible about the “Spice Islands”. In 1595, the merchant and traveler Jan Huygen van Linshoten, who traveled extensively across the Indian Ocean, published the Report on the Travels in Portuguese Voyages in the Orient in Amsterdam, which contained information on how to sail from Portugal to India and Japan. These events spurred trade expansion. In 1600, the English East India Company was founded, and in 1602, the Dutch East India Company was founded.

Since 1568, the Republic of the United Provinces had fought for its independence, and control over the spice trade was for her a matter of economic survival. Portuguese merchants used the Lower Lands as a base for spice trade in Northern Europe, but when in 1581, as a result of the Iberian Union, Portugal and Spain merged into one state, an embargo was imposed on trade with the northern provinces of the Lower Lands, who signed the Utrecht Unia. As a result, the Dutch lost their main trading partner, the main source of funding for the war with Spain, and the monopoly position in the spice trade with France, the Holy Roman Empire and the states of Northern Europe. Funds from fish trade from the North Sea and grain from the Baltic to the young republic were not enough. The hopes of the Republic of the United Provinces revived when, in 1588, the British routed the “Invincible Armada”. The development of naval forces had received the highest priority.

The Indian-Pacific Theater of Military Operations

On February 25, 1603, three ships of the Netherlands East India Company seized the Portuguese ship Santa Catarina in the Malacca Strait. It was such a valuable prize that its sale doubled the company’s capital. The legality of the seizure was questionable, because of the obscure legal status of the Netherlands, and the Portuguese demanded the return of the cargo. The scandal led to public legal proceedings and attracted international attention. Hugo Grotius, at the request of the Company, began to search for arguments in support of the seizure; and as a result, in 1609, published a pamphlet called Mare Liberum, in which he proposed the concept of freedom of navigation, asserting that the sea was an international territory and all peoples were free to use it for navigation. This concept served as the ideological basis for the Netherlands’ efforts to break Portugal’s commercial monopoly.

Since 1603, Goa, the former capital of Portuguese India, had actually been in a blockade. In 1619, the Dutch captured Jakarta, renaming it Batavia, and made it its base for operations against Goa. The two cities launched a struggle for control over the transport of spices, but the Portuguese were in the position of the defender. In 1641, the Dutch seized Malacca, and in 1658, finally expelled the Portuguese from Ceylon, and in 1663 (after the signing of the Hague Treaty) seized the Malabar coast.

Important events also occurred in the Far Eastern waters. Although the Dutch attempt to capture Macau ended in failure, the Netherlands managed to establish a monopoly on trade with Japan.

Encouraged by the easy successes in the East, the Republic decided to quickly use Portugal’s weakness in America. In 1621, the Dutch West India Company was established. Intruding into Portuguese America, the Dutch captured a number of important cities, including Olinda, as well as the capital of Portuguese possessions in America, Salvador. In the occupied territories, Dutch Brazil was formed with its capital in Maurizstad.

At the same time, action was taken in Africa. Dutch forces captured San Jorge-da-Mina and other trading posts of the Portuguese Gold Coast, and besieged Luanda.

The turning point in the war came when, on April 30, 1625, a fleet arrived from the 34 Spanish and 22 Portuguese ships with 12,500 soldiers on board. They defeated Salvador and began to conquer the Portuguese possessions captured by the Dutch. Portuguese settlers launched a guerrilla war against the Dutch invaders. The forces of the West India Company were overstretched. They could not organize an effective blockade of the Portuguese ports, and the arrival of reinforcements from Portugal led to the expulsion of the Dutch from America and Africa.

In 1638, the Dutch managed to capture a Portuguese fortress on the Gold Coast, one of the most important points of the “triangular trade”, and shortly afterward also the Portuguese island of Sao Tome and Luanda, the capital of Angola. 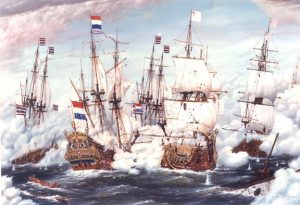 The Spaniards tried to intercept the Dutch ships in the Dunkirk area and tried to help the Portuguese as much as possible. However, Spain was already at the limit of its capabilities, defending its own possessions from the Dutch, French and Berber corsairs, as well as fighting the Ottoman Empire.

End of the War

In 1640, the Portuguese, using the Segador rebellion, rebelled and restored the independence of their country, after which England resumed the Anglo-Portuguese Alliance. The Republic of the United Provinces tried to continue the war alone, but with the loss of possessions in Brazil and Africa, chose to agree to peace. In 1661, the Hague Treaty was signed, according to which the Netherlands recognized the ownership of Portugal throughout Brazil, and the Portuguese gave the Dutch their rights to Ceylon and the Spice Islands, paying 63 tons of gold.