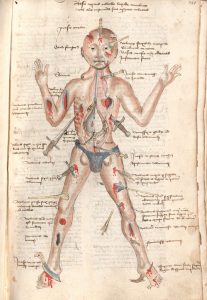 Sliced, stabbed, punctured, bleeding, harassed on all sides by various weaponry, the curious image of Wound Man is a rare yet intriguing presence in the world of medieval and early modern medical manuscripts. Jack Hartnell explores this enigmatic figure’s journey through the centuries.

Staring impassively out of the page, he bears a multitude of graphic wounds. His skin is covered in bleeding cuts and lesions, stabbed and sliced by knives, spears and swords of varying sizes, many of which remain in the skin, protruding porcupine-like from his body. Another dagger pierces his side, and through his strangely transparent chest we see its tip puncture his heart. His thighs are pierced with arrows, some intact, some snapped down to just their heads or shafts. A club slams into his shoulder, another into the side of his face.

His neck, armpits and groin sport rounded blue buboes, swollen glands suggesting that the figure has contracted plague. His shins and feet are pockmarked with clustered lacerations and thorn scratches, and he is beset by rabid animals. A dog, snake and scorpion bite at his ankles, a bee stings his elbow, and even inside the cavity of his stomach a toad aggravates his innards.

Despite this horrendous cumulative barrage of injuries, however, the Wound Man is very much alive. For the purpose of this image was not to threaten or inspire fear, but to herald potential cures for all of the depicted maladies. He contrarily represented something altogether more hopeful than his battered body: an arresting reminder of the powerful knowledge that could be channelled and dispensed in the practice of late medieval medicine.

The earliest known versions of the Wound Man appeared at the turn of the fifteenth century in books on the surgical craft, particularly works from southern Germany associated with the renowned Würzburg surgeon Ortolf von Baierland (died before 1339). Accompanying a text known as the “Wundarznei” (The Surgery), these first Wound Men effectively functioned as a human table of contents for the cures contained within the relevant treatise. Look closely at the remarkable Wound Man shown above from the Wellcome Library’s MS. 49 – a miscellany including medical material produced in Germany in about 1420 – and you see that the figure is penetrated not only by weapons but also by text. 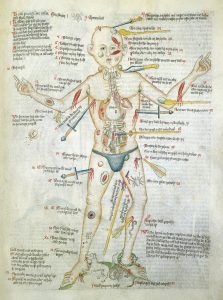 Scattered around him are numbers and phrases, indicating where in the text a particular cure might be found. Next to the spider, crawling up the Wound Man’s thigh, a phrase directs the reader to the appropriate paragraph for a cure: “Wo eine spynne gesticht, 20” (“When a spider bites, 20”). By the figure’s right hand: “10, Boss negeli” (“10, Bad nails”). Inside his left thigh: “38. Ein phil do der schaft notch ynne stecket” (“38. An arrow whose shaft is still in place”).

The Wound Man image was a convenient way for medieval surgeons to navigate their texts, but it was also an arresting reminder for both practitioners and patients of the vital knowledge contained within such manuscripts. It was living proof of the efficacy of the surgical enterprise, and a popular inclusion in medical works alongside a wide variety of related images that plotted diseases, the zodiac signs (see image below), bloodletting points, and anatomical schemes onto a similarly arranged human body. See, for example, this post from the Wellcome Library blog on the “Disease Woman” image. 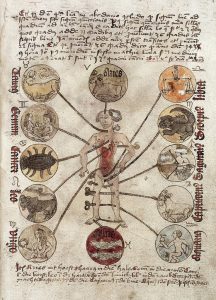 Living on today in libraries from Copenhagen to Munich, the strange figure of the Wound Man gives modern viewers a glimpse of the worrying injuries that the medieval body could receive through war, accident, and epidemic. But at the same time, it shows that medieval people did not think of themselves as helpless victims in the face of these assaults. Far from reinforcing the common perception of the European Middle Ages as a backwards and bloody period of human history, the Wound Man reminds us that it was in fact a period busy with innovative medical treatments, a vital link between the long-standing cures of the classical world and developments that were to follow in early Renaissance medicine.

And indeed, the remarkable manuscript image of the Wound Man did not fade with the medieval medical world that created it, instead finding a rich afterlife in the Renaissance and beyond. With the adoption of new print technologies in the second half of the fifteenth century, European book production underwent a major shift from handwritten manuscripts to the printed page. One book in particular, a Latin treatise first published in Venice in 1491 known as the Fasciculus medicinae (Little bundle of medicine), was the first to translate the Wound Man into printed form. 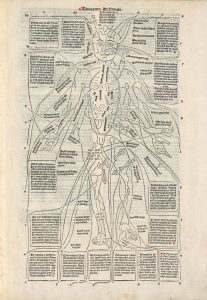 The figure still stands revealing his aggressive injuries, although certain elements have been refigured from their medieval German origins for the Italian Renaissance reader. The club hitting the side of his face has been transformed from a simple instrument into an elaborate mace. And rather than being a flat body floating in space, the figure stands firmly on the ground posed in an elegant, “s”-shaped stance, reminiscent of Italian painting and sculpture at the time.

The text of the surgical treatise which the Wound Man always accompanied in its initial manuscript iterations also made the transition into print. It is included in all of the twenty-five or so editions of the Fasciculus, as are a series of floating text boxes around the figure which draw the reader’s attention to particular maladies and cures. The book as a whole was exceptionally popular, reprinted from Antwerp to Zaragoza, and translated into Italian, Spanish, and Dutch. Several deluxe, hand-drawn versions of the printed treatise’s woodblock images were even added to manuscripts. 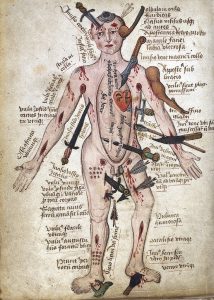 One such luxurious Wound Man copied from print into manuscript could perhaps be that found in a group of images bound into the back of a late medieval anatomical manuscript now in the Wellcome Library, MS. 290 (see above). This particularly artful figure is either drawn from the same model as the Fasciculus, or possibly stands as an interesting example in which technological progress was reversed: line drawings from the new technology of print could here have been converted and aesthetically amplified through colour and shading back into the old technology of hand-drawn manuscripts. If so, the process does not seem to have been without error. The Wound Man has lost many of his explanatory labels and his accompanying surgical text. Visual details, too, appear to have been lost in translation: a stone, which in the printed version strikes the top of the figure’s head, has been strangely refashioned into a miniature helmet.

Around the same time, the Wound Man was also appearing in German printed books, and his form was again being transfigured. In Strasbourg in 1497, he featured on the title page to a book by the surgeon Hieronymus Brunschwig (died ca. 1512) entitled Das buch der cirurgia (The book of surgery). Although he still presents his graphic wounds, he is thinner and with longer hair, but most importantly he is not accompanied by any text at all. Instead of acting as a specific index to a surgical treatise, as he did in medieval manuscripts, here the Wound Man represents something much grander: he stands as an embodiment of the very craft of surgery, proudly displaying the grievous injuries that the owner of such a surgical book was qualified to treat. 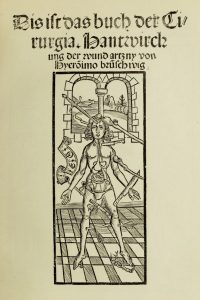 The Wound Man as featured in a 1911 facsimile of Hieronymus Brunschwig’s Das buch der cirurgia (1497) / archive.org

This visual strategy continued to be employed by a number of surgical writers in the sixteenth century, and the image of the Wound Man was adapted to fit the shifting needs of the profession. In 1517, for example, the German military surgeon Hans von Gersdorff (died ca. 1529) included the Wound Man in his Feldbuch der Wundarznei (Fieldbook of surgery), the first such image to incorporate a pair of cannonballs striking the figure’s wrist and shin. 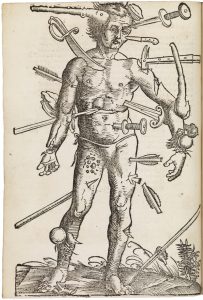 Even as late as 1678, the London surgeon John Browne’s Compleat Discourse of Wounds included another new Wound Man, this time reworked into a dramatically vaulting neoclassical nude. 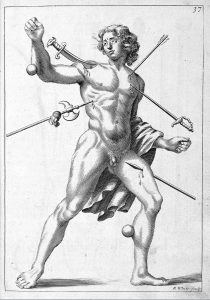 The constant invocation of the Wound Man in surgical treatises for over 300 years shows the capacity of this image to bring the reader into the gruesome yet serious space of the surgical professional. But it also speaks to the ability of the Wound Man to capture the attention of any reader who stumbled across him, even today’s most modern viewers: as his recent reappearance in the NBC TV series Hannibal suggests, the morbid wonder he encapsulates still holds true for viewers today, a medieval image catapulted across time into the twenty-first century.