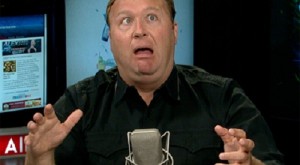 While Jones did not mention it in his video, an armed man was arrested yesterday after entering and firing shots inside the restaurant, claiming he was there to “self-investigate” the Pizzagate claims. The restaurant and nearby businesses have faced harassment and threats for weeks as false claims have spread through the far-right news swamp that the restaurant hosts an underground tunnel network where the rich and powerful abuse and traffic children.

During the presidential campaign, Donald Trump surrogate Michael Flynn—now the president-elect’s pick to be national security adviser—shared a fake news website’s sorry that claimed that Clinton was part of a pedophile network. Flynn’s son, who is involved with Trump’s transition team, continued to promote Pizzagate claims on the day of the incident.

In the video he posted last night, Jones, standing next to a Christmas tree, criticized CNN and other major news outlets, insisting that they are the real purveyors of fake news while InfoWars and other Pizzagate investigators are merely trying to uncover the truth.

Jones claimed that a number of political figures, including President Obama and Hillary Clinton’s campaign chairman John Podesta, participate in child sex acts, a conclusion that Jones arrived at after he uncovered supposed pedophile code words in emails from Podesta that were released by WikiLeaks. He claimed that elites have parties “where they’re drinking blood and they bring little kids to the party—I don’t know if it’s human sacrifice but they have little kids at these parties.”

He then launched into a winding discussion of coprophilia and the occult.

Trump drew scrutiny during his campaign for his relationship with Jones, whom he has praised for his “amazing” reputation. Jones said after the election that Trump called him to thank him for his help securing his victory.