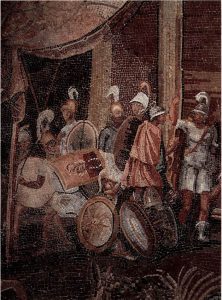 This mosaic pavement dates to the first or second century ad and depicts a group of soldiers in either an historical or mythical scene. Their uniforms are highly romanticized. The evidence for the colour of Roman soldiers’ tunics is inconclusive, but suggests that in most periods these were white, or off-white as shown here. / Creative Commons

Warfare played a major part throughout Rome’s history, creating and maintaining an empire which eventually included much of Europe, the Near East and North Africa. 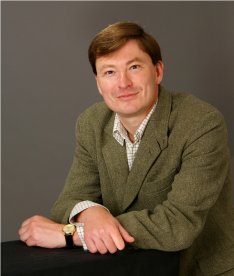 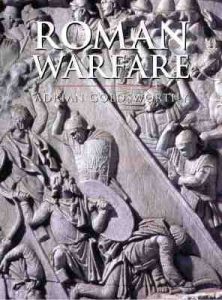 Warfare played a major part throughout Rome’s history, creating and maintaining an empire which eventually included much of Europe, the Near East and North Africa. War and politics were inseparably linked at Rome, and the right to exercise power in peacetime was purchased by the obligation to provide successful leadership in war. The Latin word imperator, from which we derive ‘emperor’, means general, and even the least military of emperors paraded the martial successes achieved by their armies. The willingness of Roman soldiers to fight each other made possible the cycles of civil wars that caused the collapse of the Republican system of government in the first century вс and prompted the fragmentation of imperial power in the third century ad. In spite of the importance of warfare, Roman society gradually became largely demilitarized. The citizen militia, recruited from the property owners serving out of duty to the state and not for pay or booty, was replaced by a professional army drawn mainly from the poorest elements in society. By the second century ad only a tiny minority of soldiers, even in the citizen legions, had been born in Italy. For a while the senatorial and equestrian officers, who filled the senior ranks as part of a career including both civil and military posts, provided a link between the army and the rest of society, but this was largely severed in the third century. After this both officers and men were career soldiers with aspirations clearly distinct from the lives of civilians in the provinces. 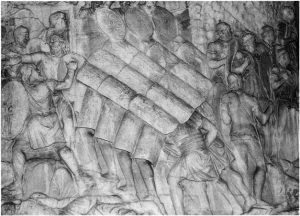 Roman legionaries employ the famous tortoise (testudo) formation, in an attack on a Dacian stronghold. Their long rectangular shields were overlapped to form a continuous roof above their heads. Only the heaviest missiles were capable of penetrating a well-formed tortoise and we hear of one incident where the defenders toppled a heavy catapult over the wall to crush the roof of shields.

Roman warfare was characterized by great ferocity and the Roman pursuit of victory was relentless. Tacitus makes a Caledonian war leader claim that the Romans ‘create a desolation, and call it peace’. The Romans had a pragmatic attitude towards atrocity and massacre that viewed almost any act as justifiable if it eased the path to victory. The Roman sack of a city which had failed to surrender before the first battering-ram touched the wall was deliberately made appalling to deter resistance elsewhere. Rebellions in particular were suppressed with great brutality and frequently involved the mass crucifixion of prisoners or their violent deaths on the sand of the arena. But against the destructiveness and ferocity of Roman wars must be set their often constructive results. The Romans profited from many of their wars, especially in the period of conquest, but their war making was never purely predatory. Defeated enemies were turned into subordinate allies who soon provided many loyal soldiers to fight the next generation of Rome’s wars. Gradually some of their former enemies gained Roman citizenship and might even in time gain admission to the elite of the Empire. Roman rule was imposed and maintained by force, but it inaugurated in most areas periods of peace and prosperity far greater than was enjoyed in the centuries before or after the Empire. Despite the claims of some authors writing at the height of the Empire’s power, the Romans had not acquired their Empire out of a sense of duty to organize and administer the provincials for their own good, but out of a self-interested desire for profit and glory. Once a people had fought against Rome then they would always be viewed as a potential enemy until they had ceased to possess the capacity to wage war against her. The simplest and most effective way of achieving this was to absorb them as a clearly subordinate ally or dependent province. The Romans displayed a talent for absorbing former enemies that was unique in the ancient world. 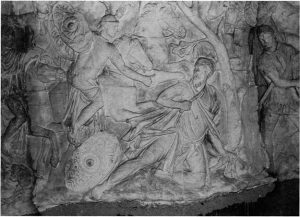 The Roman army pursued victory with ruthless determination. Often a conflict was only ended with the death or capture of a charismatic enemy leader. In this scene, the Dacian king Decebalus slits his own throat rather than be captured by the Roman horseman riding towards him. By chance, the tombstone of this man, a junior officer named Tiberius Claudius Maximus, has survived.

The professional Roman army was the most advanced fighting force that the world had ever seen. A comparable force was not to emerge in Europe for well over a thousand years after Rome’s fall. In many respects it was surprisingly modern, with its emphasis on drill, uniform and clearly defined unit organization and command structure. Soldiers followed a well-defined career pattern, were paid at a standard race subject to various deductions, and their whole lives regulated and recorded by a complex military bureaucracy. Many aspects of the life and daily routine of the Roman army would be instantly familiar to modern soldiers. However, it is important to remember that in other respects its behaviour was distinctively Roman and reflected the society which produced it. The origins of the army in a citizens’ militia, in which the whole community served in differing capacities according to their age and status, left a sense of shared endeavour, and allowed Roman soldiers a freedom to express their opinion to their commanders which sometimes seems at odds with the army’s harsh discipline. Promotion in the army was based primarily on patronage, with merit and seniority playing a subsidiary role. While patronage may in practice be common in many modern institutions, including armies, it is normally seen as a corruption of the proper, fair system of promotion. For the Romans patronage was not a corruption of a fairer system; it was the system and was openly accepted as a part of normal life. 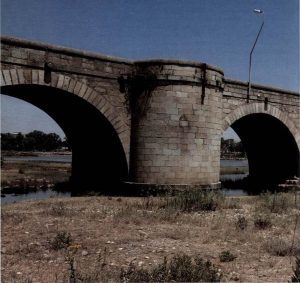 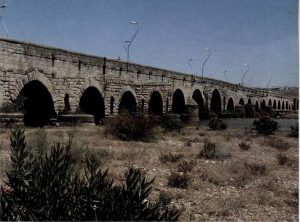 The Roman bridge at Merida stilt crosses the wide River Guadiana on sixty arches. The Roman city of Augusta Emerita was founded by Augustus as a colony for veterans from two of Ins legions. Many of the great architectural projects throughout the Empire were undertaken or supervised by military engineers.

The Romans are often seen as a methodical and highly practical people whose feats of engineering allowed their army to operate more efficiently. Roman roads, perhaps the most famous of all their legacies, provided direct, well- maintained routes along which the army could supply its garrisons or shift reserves in all but the worst of weather conditions. They were also deliberately built on a monumental scale in obsessively straight lines to be a spectacular statement of power. The bridges which, at the start of a campaign, the army was willing to build with great labour across wide rivers like the Rhine and Danube, served the practical purpose of allowing the army to cross, but were also indicative of the Romans’ ability to overcome nature itself as well as any enemy. 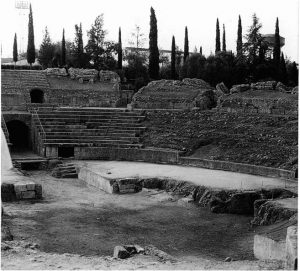 The amphitheatre at Merida was capable of seating around 15,000 spectators to watch the gladiatorial fights and beast hunts staged in its arena. This is just one of hundreds of spectacular monuments still to be seen on the sites of cities throughout the Roman Empire. They are just a small glimpse of the level of prosperity and the flourishing urban culture that existed in the provinces conquered and defended by the Roman army.

The marching camp, built at the end of each day’s march to a standard pattern, offered security for the night to the soldiers and their baggage. Its highly regimented appearance and the construction of a fresh camp after each day’s advance were highly intimidating, emphasizing the steady, relentless advance of the army. The Roman genius was to combine the practical with the visually spectacular, so that the army’s actions were often designed to overawe the enemy with a display of massive power before they actually reached him.