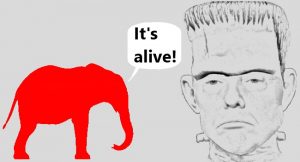 The monster create by Victor Frankenstein is legendary. The political monster named Donald Trump is certain to be a legend.

Anticipating that Trump will lose in November, Kevin D. Williamson has something to say about those who enabled Trump’s candidacy: “It’s too early to begin the bloody and tearful recriminations — but there will be a time. Not to blame Trump for being Trump, which is exactly what anybody with a lick of sense would expect him to be. But those who enabled him, who plumped him and the largely fictitious establishment-vs.-the-base soap opera for their own personal audience-building and money-making agendas? We are going to need to have a word about them, come November.”

So, who enabled Trump to become the political monster that he now is?

John Hawkins points out Sean Hannity as being one of the enablers: “Sean Hannity deserves particular attention. During the primaries, he promoted Trump non-stop to his audience with the sort of cream puff interviews you’d expect MSNBC to give to Hillary Clinton. It’s easy to understand why Hannity did that. More Trump means higher ratings and Trump is a sensitive guy who would have never spent so much time on Hannity’s show if he was regularly getting tough questions.”

Jonah Goldberg writes, “Sean Hannity will no doubt one day receive the Golden Hair Helmet for his Stakhanovite effort to get Donald Trump the nomination. Let no one forget his yeoman service in the cause to blow up the Republican party and empty a septic tank into the ground water of the conservative movement.”

Erick Erickson has his own message for Trump’s lackeys in the media: “Now is the time to put distance between yourselves and Trump. Those of you who do not will own not just Hillary Clinton’s election, but the Republicans’ loss of the Senate in 2016. This is on you as much as you may huff, puff, and declare it immoral not to support Trump. And again, it is worth noting that the now daily histrionics have everything to do with a few people seeing their careers flash before their eyes knowing what’s coming and what they’ve done. They chose ratings over the White House and now will lose both.”

Yes, the professional pundits who bet on Trump had something to gain for themselves by making such a bet. However, they bet on a horse that was lame before it was out the gate. Sadly, they persuaded GOP voters to make the same bet.

If Trump indeed loses in November, then GOP voters ought to think twice before listening to the pundits who created that political monster in the first place.