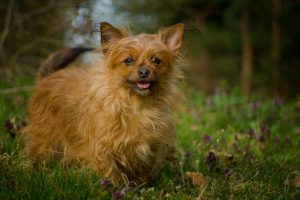 The how and the when of dog domestication are fairly settled. As for the where: now DNAsays Fido traces his roots back to wolves in Central Asia that lingered around people’s camps millennia ago.

Dogs’ origin story goes something like this: sometime between 16,000 and 30,000 years ago, there were some stressed-out hungry wolves whose hunting territory had been encroached upon by humans. Luckily, these wolves were resourceful and they noticed human beings have a tendency to leave delicious things lying around. Scavenging leftovers seemed significantly easier than going out and hunting, so they hung around the people.

Wolves make unnerving neighbors. However, some are less unnerving than others. The humans were a lot more inclined to tolerate the proximity of less aggressive, more people-oriented wolves. As an added bonus, other predators are less likely to harass you when you are surrounded by wolves. So the people and the nicest wolves came to an agreement – the people tolerated and fed the tamest and most helpful wolves.

Smart, tame wolves have smarter, tamer wolf cubs, and so over time the wolves became more and more pleasant to have around. Obviously, friendly, helpful wolves hanging around people and eating leftovers aren’t really wolves; we have a word for those things – they’re dogs.

That’s biologists’ reasonable guess for how dogs came about. We have some idea when it all happened, but it’s been harder to figure out where. Who first took in scavenging gray wolves and turned them into dogs? 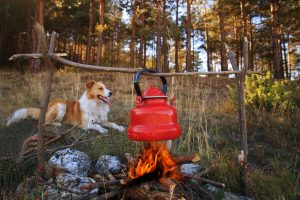 Dogs still know a good thing when they see it – warmth and food with people ‘round the campfire. Camping image via www.shutterstock.com.

All these threads of evidence broadly agree that dogs are from somewhere in Eurasia. But my colleagues and I wanted to narrow that down a bit – and to do that, we decided we needed DNA from at as many dogs as possible for our new study. 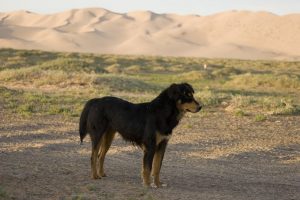 In the cradle of dogkind? Coss and Johanna, CC BY-NC

Dogs are found almost everywhere people are, and over time we have bred them to do everything from guarding livestock to going fishing. The breeds we’ve created come in many shapes and sizes, ranging from tiny Chihuahuas to giant Great Danes. The vast majority of these breeds are less than 200 years old and come from Europe. But these purebred dogs or even mixes of these breed dogs are the minority of dogs on the planet.

Most dogs are free-ranging village dogs, which live around and among people but aren’t necessarily what you’d think of as pets. You can learn more about ancient dogs by studying these village dogs (as compared to studying breed dogs) because village dogs have more genetic diversity; the number of different versions of the same genes in village dogs is higher than it is in breed dogs.

Tracing the trail through DNA sequences

Members of our lab traveled to collect blood or spit from dogs in a variety of locales, and collaborators sent us fluids from places to which we didn’t manage to travel. Village dogs are fairly easy to find for researchers carrying food. In total, we extracted DNA from the fluids of 549 dogs from 38 countries spanning the majority of the globe as well as 4,676 purebred dogs. Our lab at Cornell is conveniently located in the same building as a veterinary hospital, so most of our purebred dogs were patients.

Once we had our samples, we then determined each dog’s genotype at about 180,000 distinct points in the genome. This is the largest data set anyone has used to address the question of dog origins so far.

Therefore, we expect the original population of dogs to be the most diverse. There would be a gradient of decreasing diversity in all populations as they move away from the center of origin.

And this is the pattern we observed when we compared the genetics of dogs from different populations. Dogs from Central Asia, Mongolia and Nepal are the most diverse, with genomes that correspond to the early, original variation in the population right after domestication happened. When we look at the same DNA markers in dogs from neighboring regions, diversity decreases. It decreases further corresponding to the location’s increasing distance from Central Asia. This is the pattern we would expect if the people who first took in scavenging gray wolves and turned them into dogs were located in Central Asia. 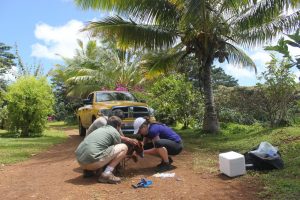 Even dogs we sampled in the Pacific Islands traced their forebears back to Central Asia. Adam Boyko, CC BY-ND

Looking at the largest data set of dogs amassed so far, we observe a very clear signal that most dogs alive today descended from dogs in Central Asia. However, we only looked at dogs alive right now. We have no information about historical populations of dogs that have no living descendants. Furthermore, the patterns of diversity we observe are reflective of the origins of dogs but also of everything that has happened to dog populations since domestication.

Other research groups are extracting DNA from bones of ancient dogs, and these sequences will provide exciting new insights from time points closer to domestication. However, ancient DNA studies are limited by the availability of ancient dog bones – which is affected by many factors other than the distribution of historic populations; for instance, some environments are more conducive to the preservation of bone and DNA than others, some regions have been more extensively investigated by archaeologists than others, and so on. If we see similar patterns in ancient and modern dogs, that will add clarity to the history of dogs and the people who love them.