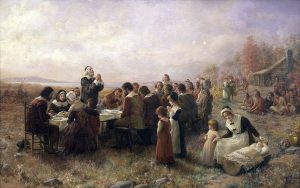 Jennie A. Brownscombe’s ‘The First Thanksgiving at Plymouth’ (1914). Wikimedia Commons

There is no holiday more American than Thanksgiving – and perhaps none with origins so shrouded in comforting myths.

The story is simple enough. In 1620 a group of English Protestant dissenters known as Pilgrims arrived in what’s now Massachusetts to establish a settlement they called New Plymouth. The first winter was brutal, but by the following year they’d learned how to survive the unforgiving environment. When the harvest season of 1621 arrived, the Pilgrims gathered together with local Wampanoag Indians for a three-day feast, during which they may have eaten turkey.

Over time this feast, described as “the first Thanksgiving,” became part of the nation’s founding narrative, though it was one among many days when colonists and their descendants offered thanks to God.

The peace wouldn’t last for long, and much of America’s early Colonial history centers on the eventual conflicts between the colonists and the Native Americans. But the traditional version ignores the real danger that emerged from two Englishmen – Thomas Morton and Ferdinando Gorges – who sought to undermine the legal basis for Puritan settlements throughout New England.

Over 200 years later, when President Abraham Lincoln declared the first federal day of Thanksgiving in the midst of the Civil War, it was a good moment for Americans to recall a time when disparate peoples could reach across the cultural divide. He was either unaware of – or conveniently ignored – the English schemers who tried to chase those Pilgrims and Puritans away.

The Puritans followed the Pilgrims, founding the Massachusetts Bay colony in 1630. There, John Winthrop, who became the governor, wrote that the English wanted to create a “city upon a hill.” The line came from Matthew 5:14, an early example of how these English travelers viewed their actions through a biblical lens.

The growing numbers of English migrants strained the local resources of the Algonquian-speaking peoples. These locals, collectively known as Ninnimissinuok, had already suffered from a terrible epidemic possibly caused by a bacterial disease called leptospirosis and an infectious disorder, Weil syndrome, in the late 1610s that might have reduced their population by 90 percent.

Worse still, in 1636 the Puritans and Pilgrims went to war against the Pequots, whose homeland was in southern Connecticut. By the end of 1637, perhaps 700 to 900 natives had died in the violence, and another 900 or so had been sold into slavery. The English marked their victory with “a day of thanksgiving kept in all the churches for the victory obtained against the Pequods, and for other mercies.”

English hostility against Natives has taken a central place in historians’ version of the origins of New England. But though it is a powerful and tragic narrative, indigenous Americans did not pose the greatest hazard to the survival of the colonists.

Just when the Pilgrims were trying to establish New Plymouth, an English war veteran named Ferdinando Gorges claimed that he and a group of investors possessed the only legitimate patent to create a colony in the region.

Gorges had gained notoriety after battling the Spanish in the Netherlands and commanding the defense of the port city of Plymouth, on the southwest coast of England. Afterwards, Gorges was in search of a new opportunity. It arrived in 1605 when the English sea captain George Waymouth returned to England after a voyage that had taken him to the coast of modern Maine and back. Along with news about the coastline and its resources, Waymouth brought back five captive Eastern Abenakis, members of the indigenous nation that claimed territory between the Penobscot and Saco rivers in Maine. Waymouth left three of them with Gorges. Soon they learned English and told Gorges about their homeland, sparking Gorges’ interest in North America.

Gorges, with a group of investors, financially backed an expedition to the coast of Maine in 1607, though the colony they hoped to launch there never succeeded.

These financiers believed that they possessed a claim to all territory stretching from 40 to 48 degrees north latitude – a region that stretches from modern-day Philadelphia to St. John, Newfoundland – a point they emphasized in their charter. Gorges remained among its directors.

As luck would have it, Gorges soon met Thomas Morton, a man with legal training and a troubled past who had briefly visited Plymouth Plantation soon after the first English arrived. Morton would join forces with Gorges in his attempt to undermine the legal basis for the earliest English colonies in New England.

Morton and the Pilgrims despised one another. By 1626 he had established a trading post at a place called Merrymount, on the site of modern day Quincy, Massachusetts. There, he entertained local Ninnimissinuok, offering them alcohol and guns. He also imported an English folk custom by erecting an 80-foot pole for them to dance around.

The Pilgrims, viewing Morton as a threat because of his close relations with the locals and the fact that he had armed them, exiled him to England in 1628.