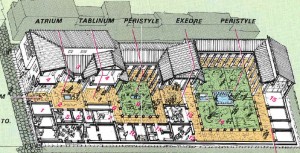 Roman domestic and public architecture began to overlap at some point as houses began to take on characteristics of public buildings.  Roman aristocratic houses followed a fairly distinct and common pattern of design whether smaller houses or larger imperial houses.  They were places of social interaction where many social relationships played out.  Houses then were more “public” than we know them today. 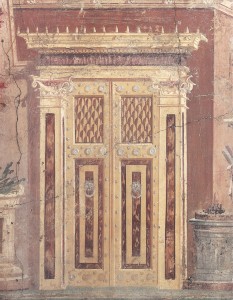 The entryway to the house probably consisted of a very large door, indicating that this was a place of people of means.  The façade itself was actually quite plain.  They did not, like today, place things on the outside to broadcast their identity and instead kept such things private to the interior.  Houses did not consist of many windows for the same reason as well as to prevent outsiders from seeing valuable things to steal.  The front door was the only entry and exit to the house.  Spaces in the front facing the street were often rented to merchants. 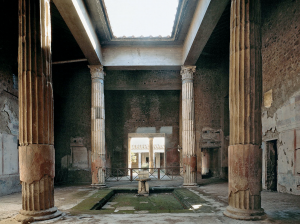 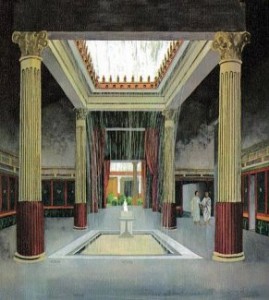 The courtyard (atrium) was the first area encountered by guests after entering the villa.  This part of the villa served as the entrance hall onto which some of the main rooms opened.  The floor of the atrium was extensively decorated with mosaics.  These were made of small rectangular black-and-white stones (tesserae) set in simple geometric patterns.  A passageway (fauces) led into the peristyle (inner villa garden).  In the center of the atrium stands an impulvium (basin) that had the function of collecting rainwater coming from the compulvium (opening in the roof) into an underground water tank.  However, by the time the atrium of Torre Llauder was built, this kind of basin had lost its original function and was built for ornamental purposes only.  The skirting of the impulvium was decorated with different kinds of colored marbles.  At the center of the impulvium, there may have been a jet of water.

Lining the interior would be busts (portraits) to display the lineage of the residents of the house.  Lineage was extremely important to Romans for claims of inheritance as well as one’s access to the cursus honorum (Roman political career ladder).  Private spaces around the atrium would often consist of shrines. 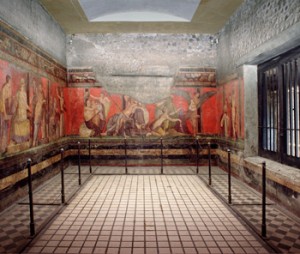 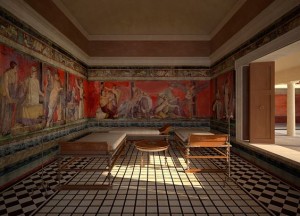 The triclinium was the dining room in Roman houses.  Dining was an extremely important part of Roman culture, often taking place from morning to night in celebrations and gathering.  The word is derived from Greek for “three couches” to reference the number of sloped seating areas around the dining table.  Romans had a tradition of dining while reclining.  The dining room was an entertaining space.  There would often be a row of columns around the room in Hellenistic peristyle fashion, indicating Greek influence.  Greeks used peristyle columns to define spaces, and Romans did so here as well. 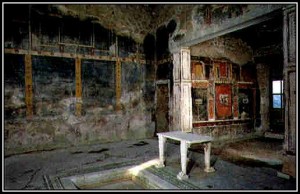 The tablinum would be comparable to the home office of today, where the head of the household would receive and entertain his oecus (clients).  Imagine “The Godfather” – the household head would receive clients who conducted business for him.  They would bring him his portion of the income for the businesses, they would discuss the business, and “talk shop” in that area.  The head of the family very rarely left the house to conduct business.

Access to the tablinum was often by means of marble step, as this room was slightly higher than the rest.  This prominent position as well as a front door embellished with attached columns helped to praise the figure of the host in front of his clients who would be waiting in the hall to be received by him.  Archives of family, house, and business affairs were kept in the tablinum. 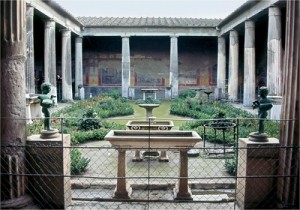 The peristylum was a colonnaded portico that surrounded the central garden of the viridarium (villa).  The mosaic from the peristyle is of geometric design, in black-and-white.  The peristyle could also have served as a place to exercise before bathing.  The taste Romans had for fountains is well-known, with jets of water and pools.  A small marble fountain was most likely in the center of the peristyle.  The peristyle created a microcosmos at the center of the villa, whereby its inhabitants could enjoy nature while still living in seclusion from the outside world. 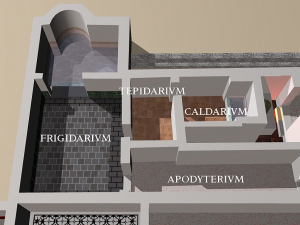 In addition to the hygienic function they served, the balneae (baths) were a place to socialize.  Thermal installations, which were set with all types of luxury, were built to satisfy Earthly pleasures in the same way as libraries would fulfill the mind.  Several rooms made up the baths in the Torre Llauder viridarium:  The apodyterium (changing room), frigidarium (cold-water baths), tepidarium (warm baths), and caldarium (hot-water baths). 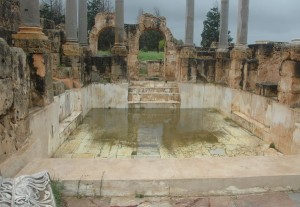 The floor of the frigidarium (cold-water bath) was paved with slate slabs and framed by a white marble edging.  A step, also covered with slate slabs, gave access to the pool (which had an apse on its northern side).  Walls of the frigidarium pool were covered with red opus signinum to prevent water from leaking.  Opus signinum was a building material occassionally used in ancient Rome.  It is made of tiles broken up into very small pieces, mixed with mortar, and then beaten down with a rammer.  The lower steps of the flight of steps leading into the pool were covered with marble. 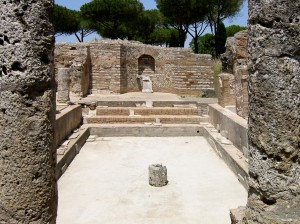 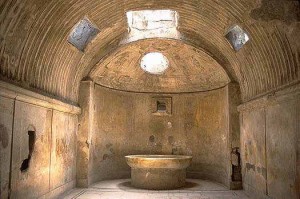 The frigidarium provided access to the caldarium (hot-water bath) by going through a tepidarium (warm room).  Both the tepidarium and caldarium were heated by means of an under-floor heating system known as a hypocaust.  A suspensura (top floor) was supported on pilae (tile stacks) to form area through which hot gases drawn from the praefurnurium (furnace) circulated.  Hot water for the alveus (small pool) was heated in a bronze or lead boiler placed directly on top of the furnace.  As with the frigidarium, this pool was waterproofed by a covering of red opus signinum.  A small room next to the praefurnurium was most probably used for storing firewood. 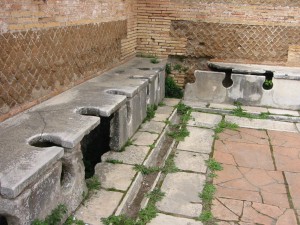 Although it may seem shocking now, the latrinae was, in Roman times, a public space where friends would meet to have a chat while relieving themselves.  Seats were placed directly on top of the sewer that would quickly wash away any waste.  The system guaranteed good hygiene conditions and kept the area free from bad odors.  Underneath users’ feet ran a small water conduit.  One would clean oneself using a sponge stuck on the end of a stick and wash hands at a small basin placed in the corner.

Public architecture provided amenities that Romans were able to use without having to purchase them in their own households such as public baths, latrines, water sources, etc.  These amenities were not available in countrysides, which is where more wealthy aristocrats were able to build their own villas such as the Torre Llauder in Spain.  There are many aspects of Roman architecture that resonates with us even today, but there are also many differences that indicate clearly unique Roman culture (meeting in latrines, for example).

Aristocrats could afford to construct their own villas in any Roman province to have in their homes the amenities typically provided in larger Roman cities, and their guests would take advantage of these benefits in these homes that were the social gathering places for families and their friends at the time.

The wealth of Rome is available for all to see in ruins today, and it was that wealth that eventually contributed to beginning of the end under later emperors and politicians who began playing with the currency to afford more and more.  The common people contributed themselves with a constant cry for paneres et circenses (bread and circuses).  Enough was never enough, until enough was enough.

We’re never far from where we were.