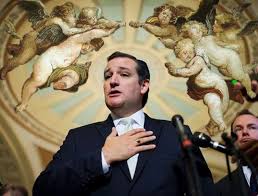 Reports from legitimate sources, including Taegan Goddard’s Political Wire are raising the issue of a sex scandal involving Republican candidate for the presidential nomination, Ted Cruz.  The initial report came from The National Enquirer which also broke the affairs of John Edwards, Jesse Jackson and Gary Hart, among others.  As one report from another source noted, the Enquirer has a good record when it comes to breaking stories of affairs.  The report suggests at least five different women, including at least two affiliated with campaigns have been involved with Cruz.

Two of the women referenced in the Enquirer, though not named, have been “confirmed” as a story awaiting publication by the Washington Times.  A Breitbart reporter has also been sitting on the story since perhaps as long as February.  The Rubio campaign reportedly knew of the scandal and internally referred to it as “The Thing”.  They dropped the idea of using it after Rubio dropped out because they didn’t want to help Trump.

Here’s what another publication, DangerandPlay.com, is saying.  FYI, the reference to the Fiorina campaign has to do with rumors that Cruz had an affair with a Fiorina staffer and made a cross-campaign contribution of $500,000 as “hush money”.  I don’t have independent evidence and have to report that this is rumor, has been reported to the FEC for investigation.

“The FEC investigated a $500,000 transfer made from Ted Cruz to Carly Fiorina, a competitor.

The unexplained manner in which Carly Fiorina got her hands on half a million dollars of another candidate’s money this summer has now graduated from being an internet curiosity to becoming a legal matter, as the Federal Election Commission has begun an inquiry into where the money really came from and why.

Why would Cruz donate money to another candidate? One of Cruz’s alleged mistresses is Sarah Isgur Flores. She was a manager of Fiorina’s campaign!

Note that many Rubio backers mentioned a huge Ted Cruz scandal that they were sitting on. These are also anti-Trump forces who have chosen to back Cruz.

Many Rubio supporters and anti-Trump consultants hinted at The Thing- which was a campaign-ending Ted Cruz scandal. They dropped it once Rubio left the race, as they did not want Trump to win.”

This hasn’t quite made it to the mainstream media  – yet.  But, it’s all over Twitter and social media.  If true, what does it do to the Republican presidential field?  Given his fastidious religiosity, don’t be surprised if this sinks the Cruz campaign.  Is this why Heidi Cruz looked so uncomfortable being hugged by her husband at an appearance the other day?  Stay tuned as we learn whether or how much of this has a basis in fact…maybe none, maybe some, maybe all, maybe more.

UPDATE: Cruz, unprompted, spoke about the allegations earlier today.  He described them as “garbage” and accused “Donald Trump and his henchmen” of being responsible for the story.  He also accused the National Enquirer of having ties to Trump.  He did not comment on the other publications that had been preparing to run the story.   As he prepared to leave the stage a reporter shouted out the question, “Have you been faithful to your wife?”  Cruz left the stage without answering.

Thank you to the Washington Post for information resulting in this update.