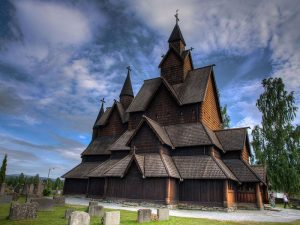 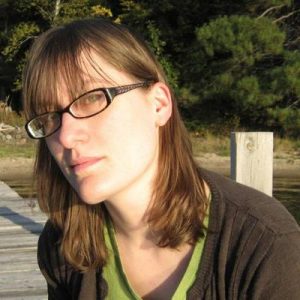 Starting in the Middle Ages, when Norway became a Christian country, former Vikings-turn-Christians built immense cathedrals and churches to honor the new religion—all made entirely from wood rather than the typical stone construction of the time. Known as “stave” churches, after the wooden “stavers” or corner posts and load-bearing pillars that keep the church from collapsing, these churches range from modest structures to ornate, multi-layer architectural masterpieces.

At one point, more than 1,000 stave churches existed throughout Norway, but many of the original ones fell apart over time or were destroyed. Often, the original stavers were driven directly into the ground, allowing for quick rot; other churches were ravaged by fires or storms. Now, only 28 historical stave churches remain, many of which feature elaborate carvings that mix Christian and Viking symbols.

These are the ten oldest in Norway: 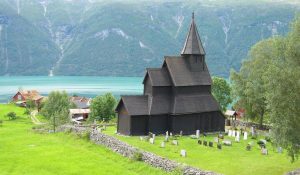 Built about 1130, Urnes is Norway’s oldest stave church and the only one on the Unesco Heritage list. The site, though, is much older, and was home to two earlier churches. Parts of the previous churches, include a door opening, a corner post and several wall planks, were repurposed in the new construction. The northern wall features the most intricately decorated panel found in any existing stave church. The carvings, created in a traditional Viking style, show a snake biting and being bitten by another animal. The carvings combined with the Romanesque basilica layout make the church a fascinating example of the melding of pre-Christian Nordic symbology with Christian medieval influences. The church and cemetery are still in use today. 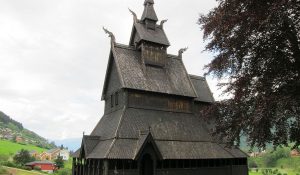 Hopperstad was also built around 1130, but unlike Urnes, much of the interior has been removed and replaced. Over the years, the original construction fell into disrepair and neglect. In the early 1880s, architect Peter Andreas Blix saw the historical significance of the church and offered to restore it free of charge. Blix based his restoration on other existing stave churches, but preserved the church’s original consecration crosses. Thanks to strong Norwegian heritage in the Midwest, there’s an exact replica of Hopperstad in Moorhead, Minnesota. 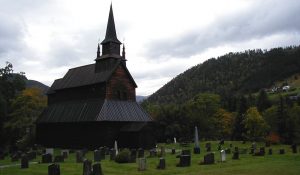 Twenty-two staves support this church, the largest number of all the remaining stave churches in Norway. Kaupanger is also the best preserved and is still the parish church used by the surrounding community today. Two previous churches stood here before the current church was built, one of which was partially burned as a consequence of a farmer’s revolt in 1183 that resulted in the governor Ivan Dape’s murder. The architecture at Kaupanger is fairly different from Norway’s other stave churches—emphasizing height rather than ornate carvings. 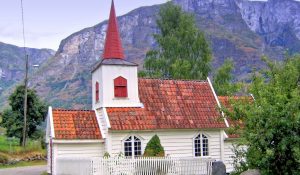 From looking at it, one wouldn’t expect this tiny church to be in the same league as the other stave churches dotting Norway. White clapboard siding covers the exterior, making it look like a little chapel rather than a Viking-era relic. Undredal is one of the smallest historic wood churches, seating only about 40 people. A few artifacts are on display inside: the first bell and chandelier, dating back to the Middle Ages; a kneeler from 1647; candleholders from 1702; a 1680 baptismal font; the original wall paintings from the 1600s; and a pulpit from 1696. When the church was first built in 1147, it was called St. Nicholas Chapel. 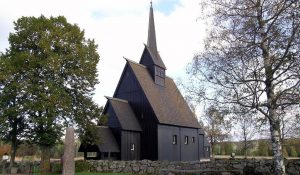 This church is half restoration, half reconstruction. The original layout of the church was built over twice, in the 1600s and the 1800s. In the 1950s, the stave foundation from the original medieval church was discovered, and it was rebuilt to match the original footprint. Originally, the church had a dirt floor and benches only along the sides for the elderly and infirm. Everyone else stood for services. The paintings on the walls inside are recreations, made to match décor on older parts of the church. Høyjord also has a stave supporting the church from the middle of the sanctuary, a feature found in only two stave churches in Norway. 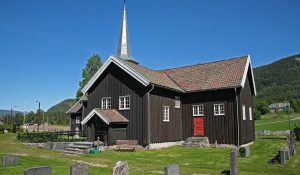 Originally, Flesberg was a simple rectangular stave church when it was built in the late 1100s. In the 1730s, it was expanded to a cross shape. The original church stands as the western arm of the cruciform. Church services and concerts are still held in the building in the summer. Flesberg also holds the honor of being the subject of the oldest existing painting of a stave church, a landscape from 1701. 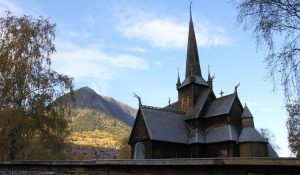 From the time the church was built in the 1160s until the 1800s, Lom was used as both a church and a resting place for those traveling throughout the country. Remodeling began in the 1600s when the church was deemed too small and was expanded into a cruciform shape. It was expanded again in the 1660s, making it one of the largest stave churches in Norway. The carved dragon heads featured in the eaves are exact modern replicas, installed in 1964, so that the originals could be preserved. 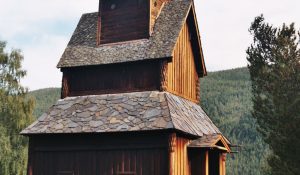 The Torpo church is the oldest building in Hallingdal. Built in the late 1100s, it is well known for a series of 13th-century paintings depicting the the martyrdom of St. Margaret, the saint the church was consecrated to. One of the more unique features in Torpo is an inscription on a chancel rail from the original builder. In runic script, it reads, “Torolf built this church.” 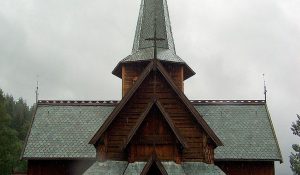 Hedalen is yet another stave church that continues to be used as a parish church. It was built around 1163 and is decorated with dragon and vine carvings meant to represent the act of leaving behind evil forces as you enter the church. There’s a bearskin in the sacristy, and legend has it the skin belonged to a bear shot before the altar once the church was rediscovered in the woods after The Plague. The church holds some medieval relics, including a Madonna statue from 1250, a crucifix from 1270, and a font cover from 1250. The church’s prize possession is a copper-gilded wood reliquary, also from 1250. These artifacts are unique and rare throughout Norway as many Catholic objects were destroyed after the Reformation. 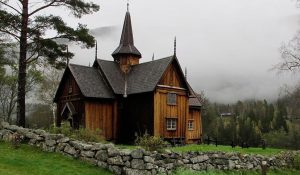 When Nore was built in the late 1160s, the construction was unique for the time: it was built as a choir church and has balconies, an apse, a choir and cross arms. A large amount of the original building is still standing, though it was remodeled and partially rebuilt in both the 1600s and 1700s. Some of the original decorative paintings can still be seen, as well as a prayer inscription and two crucifixes dating back to the Middle Ages. 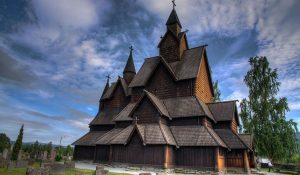 Though not in the top ten oldest stave churches, Heddal is the largest in Norway. It was first built around 1250, and as it’s still in continual use, visitors can see several historical eras reflected in the décor. Some of the prized items inside and on the exterior are rose paintings from the 1600s, runic inscriptions and carvings telling the Viking legend of Sigurd the Dragon-Slayer. There’s also a café, an exhibition about the history of the church, and an open-air historical museum of a farm and buildings from the 1700s and 1800s.