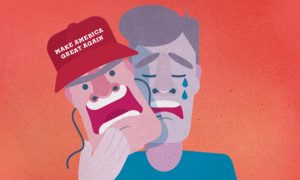 If we listen carefully to Trump’s supporters, we can hear their desire for progressive policies.

Jon Lovell, 66, is as typical a Trump voter as any. I ran into him at a Trump victory party in the suburbs of Portland the night of the Oregon Republican primary. Lovell works in construction, is white, older, a Republican, and a Vietnam-era Marine Corps vet. “I do flooring, drywall, renovations, all sorts of construction,” he said. He supports Trump because of all “the Hispanics you see on construction sites. They’ll do the job for less than I will.”

Lovell’s animus toward Hispanics goes beyond the workplace. He mentioned a recent home-renovation job.

“I fixed up this lady’s three-bedroom house she rents for $800 a month,” he said. “It was trashed by Hispanics. She puts a family in every bedroom and one in the garage. She spends $10,000 to $15,000 to renovate it every couple a years. I said, ‘Why don’t you rent to a White family? It won’t get trashed.’ She said, ‘If I do, one of them loses their job and I don’t get the rent. If one of the Hispanics loses their job, I’ll still get the rent from someone.’”

I didn’t bother pointing out that cramming four families into a single-family home is a sure way to trash it—regardless of their ethnicity. Instead, I told Lovell I’d seen similar situations many times in New York City. “She is probably charging each family close to full rent, raking in $2,500 or more a month,” I said. “That’s why she can afford to renovate it every two years.”

Lovell was silent, processing what I’d said. I added, “They’re being exploited as well.”

We talked about his family—a daughter with a college degree and successful career, another one in and out of jail, and a son with mental-health problems living on Supplemental Security Income. He spoke with affection of his troublesome daughter, who is Lesbian. “I told her, just because you’re Gay doesn’t mean you need to get into all those drugs and violence.” Fifteen years ago, her partner called Lovell and told him to pick up his four grandchildren or she would ship them off to foster care.

Lovell, who is divorced, raised the children alone. The family depended on food stamps, Medicaid, and Temporary Assistance for Needy Families. The youngest is now in college, and the others have already graduated.

I asked him how he reconciled his support for Republicans with his family surviving on welfare. He hesitated. His eyes grew wet. Finally, he said, “People need help. We can’t cut these programs. They need them to survive.”

Lovell is one of more than 40 Trump supporters I’ve interviewed, including at a thousands-strong rally in Eugene, Oregon; at Portland State University; and at the victory party. He embodies the paradox of Trump’s appeal: Workers ravaged by global capitalism want the government to help “real Americans” and punish undocumented workers—instead of going after the bosses who hired them, like Trump himself. In this context, “building the wall” with Mexico is a literal manifestation of their anxieties about the economy, society, and race.

Many commentators, however, focus exclusively on Trump’s bombast and racism, and conclude his supporters are “a disparate group of bigots” and “idiots” who “are not victims.” This is as uninformed as believing that deporting 11 million immigrants will revive working-class fortunes.

For one, 14 million people voted for Trump in the primaries, and no group that large is a monolith. The supporters I met included military vets, retirees, high-school students, entrepreneurs, college graduates, business owners, factory workers, service industry employees, police officers, management personnel, union members, and lawyers. I discovered a sprinkling of Asians, Blacks, and Gays, and interviewed many women, though Trump’s support is disproportionately male. I met Christian conservatives and atheists, pro-war hawks and isolationists, fervent supporters who said, “We love Trump so much it hurts,” and voters in disbelief that they were supporting a vulgar reality-TV star because, in their view, he was the lesser evil.

A wealth of data also shows Trump’s support is tied to economic and social distress. His backing is highest among Whites who are affected by declining and stagnant wages, are less likely to have high-school or college degrees, have been knocked out of the workforce, or whose life expectancy declined.

The last fact, established by a recent study, is astonishing because declines in life expectancy are extremely rare in industrialized countries—even in wartime. It’s proof that middle-aged White workers are suffering in distinct ways from an economic war that’s waged as much by liberals as conservatives. The booming stock market of the 1990s did not soften the blows these workers suffered from Clinton policies like NAFTA, mass incarceration, restricting access to welfare, and deregulating Wall Street.

Donald Trump knows and exploits this. In Eugene, he lacerated the Clintons by calling NAFTA a “disaster [that] has destroyed big, big sections of our country.” Trump’s racialized economic populism thrives when both parties are in thrall to Wall Street.

Many of the White workers planning to vote for Trump would likely have supported a Democratic candidate in the past, but the party now offers them little. Adding insult to injury, liberals deride them as privileged and ignorant racists, rather than acknowledging their real economic grievances.

While I did not ask them specifically about Bernie Sanders, a few mentioned that he was their second choice after Trump. Those who liked Sanders spoke of their personal economic woes and supported policies such as ending corporate free-trade deals and creating public infrastructure programs.

Race, however, is the big stumbling block for the left-leaning Trump voters. A candidate like Sanders can’t do it alone. Stronger unions and social movements could help these voters develop progressive class politics, rather than leaving them vulnerable to Trump-style populism.

Racism is not a terminal disease

The two most prominent positions Trump voters take on immigration reveal opportunities for progressive campaigns in the future. The first describes immigration as a tax burden. At the Trump rally in Eugene, Michael, a 34-year-old courier, said, “You can’t just walk over the border and suck off the system, getting food stamps and health care.”

Mariah, a 40ish retail employee, agreed. “Immigration is the biggest thing,” she said. “Don’t come to this country and suck us dry.”

Likening immigrants to parasites is a racist trope. And it’s incorrect: The difference between what the U.S. government spends on public services used by undocumented immigrants and what it earns from the taxes they pay is minuscule, if anything. It’s unlikely these voters can be won over to progressive economic policies because they are Tea Partiers hostile to social programs. Janice, a mill worker, was dead-set against Sanders because “he wants to tax us and spread our money around.”

But not all Trump supporters view undocumented immigration in this way. Others link it to wages, jobs, and free trade. Rick, 29, who studies electrical engineering at Oregon State University, said, “Illegal immigrants are driving down wages for lower-class workers.”

Paul, 42, a carpenter, said, “I’ve been laid off more than working the last three years. I see Trump as being for the little people.” Paul, who said Sanders was his second choice, supported restrictions on immigration. “It’s time to take America back. Bring our jobs back.”

While the language carries whiffs of racism, it’s crucial to remember that it’s not a terminal disease. It’s a learned behavior and a social system, as Michelle Alexander describes in her book The New Jim Crow. Providing class-based alternatives can help people unlearn racism. That was one of the lessons of the 2012 election. Running against Mitt Romney, Barack Obama did 56 points better among White male workers who were union members than among those who were not. It’s a powerful sign of how class can outweigh race—and disrupts the notion that the White working class is inherently racist.

Yet Hillary Clinton’s campaign has veered the other way, declaring single-payer health care will “never, ever come to pass,” attacking Sanders’ calls for free higher education, and dismissing calls to break up investment banks because doing so would not end sexism, racism, or homophobia.

She’s charted a similar course on free trade, providing an opening for Trump. Her election-year flip-flop on the Trans-Pacific Partnership can’t distract from her longstanding allegiance to Wall Street. The legacy of NAFTA and the $21.6 million she has pocketed from corporate speeches since 2013 has weakened her credibility among White working-class Democrats in the industrial Midwest. But rather than try to win them back, some Democrats have mused that she can snatch “two socially moderate Republicans and independents” away from Trump for every blue-collar voter she loses in the region.

Trump has also found a surprising opening with Republicans like Jon Lovell, who are concerned about cuts to social programs. Trump attacks Clinton from the left by flirting with raising the minimum wage and strengthening Social Security. These positions resonate with supporters who rely on Social Security, military and police pensions, Medicaid, the Department of Veterans Affairs, and welfare. Three supporters I spoke with acknowledged receiving Supplemental Security Income for disabilities. The Clintons are no friend of the workers on this front either, as in the 1990s they pushed through the disastrous cuts to welfare and even wanted to privatize Social Security.

No doubt many Trump voters are cold-hearted, racist, and view life as dog-eat-dog. But many others are suffering, and the Clinton wing of the Democratic Party is responsible for much of the economic pain they’re experiencing.

Given how many voting blocs he’s alienated, Trump’s paths to victory are narrow at best. But having blown up a campaign system dependent on fundraising, advertising, consultants, polling, and careful scripting, Trump has blazed a path for a future demagogue who can employ racist populism while ditching the vulgarity.

By cynically using race and gender to pit workers against each other, Hillary Clinton is able to advance her Wall Street agenda. This will only alienate more workers from the Democrats. The best way to defeat Trumpism is by fusing race, class, and gender issues.

A starting point is learning to listen to Trump voters, finding genuine points of connection that can lead them away from divisive bigotry to the common good.