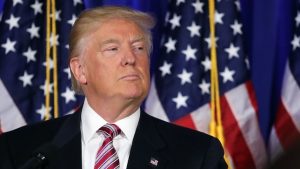 Donald Trump praised a Muslim U.S. soldier killed in Iraq but continued to criticize the man’s father, who spoke out against Trump at the Democratic National Convention in Philadelphia last week.
After a day of backlash over the GOP presidential nominee’s comments regarding the family of Humayun Khan, Trump released a statement late Saturday night honoring him.
“Captain Humayun Khan was a hero to our country and we should honor all who have made the ultimate sacrifice to keep our country safe. The real problem here are the radical Islamic terrorist who killed him, and the efforts of these radicals to enter our country and do us further harm,” Trump said.
“While I feel deeply for the loss of his son, Mr. Khan who has never met me, has no right to stand in front of millions of people and claim I have never read the Constitution, (which is false) and say many other inaccurate things. If I become President, I will make America safe again.”
Khan’s father, Khizr Khan, a lawyer who immigrated from Pakistan, addressed the Democratic convention last week, asking what Trump had sacrificed and whether he had ever read the Constitution.
Trump lashed out at Khan and his wife, Ghazala, who stood at his side on the stage, on Saturday.
The GOP nominee said he had “made a lot of sacrifices” through his work and raised questions about Khan’s speech and why his wife hadn’t spoken, suggesting that she “wasn’t allowed” because of her Muslim faith. Ghazala Khan later said she was too upset to take the microphone.
The comments immediately sparked backlash from both Republicans and Democrats.
In his Saturday statement, Trump bashed Democratic presidential nominee Hillary Clinton for her Middle East foreign policy record and the attack on U.S. personnel in Benghazi and warned against radical Islamism and immigration from certain countries.
“Given the state of the world today, we have to know everything about those looking to enter our country, and given the state of chaos in some of these countries, that is impossible,” he said.