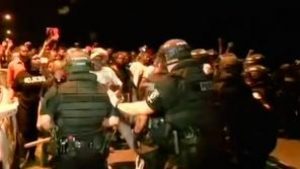 Another day, another racist dog whistle echoed by Donald Trump. While the urban unrest in Charlotte, North Carolina continues, Trump – in a pathetic attempt to sound presidential – blamed the rioting on drug use, without citing any facts to back up his claim.

The comment, made in a speech in Pittsburgh, was off-script:

“If you’re not aware, drugs are a very, very big factor in what you’re watching on television.”

Somehow, everyone but Donald Trump is unaware of the “factors” contributing to a legitimate unrest that stems not from drugs, but from the black community being continuously fed up with racial injustices and the murders of unarmed men who posed no credible threat to law enforcement.

What Donald Trump is seeking to do is sow the seeds of a racist, stereotype that plagues this country: blacks are on drugs, and it makes them violent.

The facts are out there: white people do more drugs, and serve less time. This notion that because black Americans are fed up with injustice is somehow attributed to drug use or a yearning for drugs is, yes, racist. It reaffirms people’s ignorant and misguided stereotypes about urban black communities while simultaneously deflecting from other drug crises that are affecting white communities at much more critical levels.

Recent findings in the American Journal of Public Health, the abuse and dependency on “hard drugs” are “less common among delinquent African American youth than those who are non-Hispanic white.” White people, in general, are also more likely to deal drugs than black people. So the people selling drugs to our kids, parents, and members of the community are more likely to be white than black, but yet black people are still seen as the culprits of America’s drug problem.

And Donald Trump’s claim, no matter how minuscule it may be, just makes the problem worse.

Instead of accusing black Americans of being drug-induced degenerates, maybe Trump should travel up to New Hampshire and Maine, where an unprecedented opioid addiction is killing hundreds of white citizens every year, and nothing is being done to combat it.

Trump’s going to get a huge wake up call with black voters in November if he keeps this up.