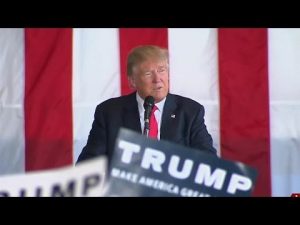 The Trump campaign has lately alternated between disaster and farce: the awkward rollout of Mike Pence, the botched logo, two parliamentary disputes on the convention floor, a muddled message, a plagiarized speech by the would-be first lady.

But in one respect, the Republican National Convention of 2016 has been a yuge success. It is the triumph of narcissism.

Midway through the 8 p.m. hour of Monday’s programming at the convention, Patricia Smith, whose son was killed in the Benghazi terrorist attack, spoke emotionally about how “I blame Hillary Clinton personally for the death of my son.”

But her speech was pre-empted — by the candidate.

Fox News’ Bill O’Reilly, citing a “breaking-news situation,” cut off convention coverage to do a phone interview with the candidate. Trump’s “breaking news” turned out to be little more than a denunciation of Ohio Gov. John Kasich for skipping the convention. Upstaging his own convention speakers? Classic Trump: Self-worship over sound judgment.

For weeks, GOP leaders pleaded with Trump to build a professional operation, but his campaign resisted, saying he didn’t need to act like other politicians. Now we see the consequences: a convention rally of conspiracy theorists, co-hosted by Trump’s longtime political adviser; a needless floor fight over convention rules in which the hapless presiding officer, a backbench congressman, walked off the stage; and plagiarized phrases in a speech by the would-be first lady that went unvetted by Trump’s thin staff.

Trump allies variously reacted by saying there was no plagiarism, that only 7 percent of the speech was plagiarized, that the staffer responsible should be fired, and that a part of the Michelle Obama speech that Melania Trump lifted from was itself purloined from radical leftist Saul Alinsky.

The shootings of police in Dallas and Baton Rouge gave Republicans an opening to try to establish themselves as the party that will keep Americans safe. Monday night’s program was, shrewdly, packed with law-enforcement and military types, numerous “victims of illegal immigrants” and former New York mayor Rudy Giuliani, who fired up the delegates.

Melania Trump made only one passing reference to the night’s theme of security. She spoke, rather, about her husband’s manifest greatness. “He will do this better than anyone else can, and it won’t even be close.”

His children picked up the magnificence Tuesday, attesting that “his desire for excellence is contagious” (Tiffany Trump) and that “we’re the only children of billionaires as comfortable in a D10 Caterpillar as we are in our own cars” (Donald Jr.).

Trump’s personal greatness was, likewise, the theme of his Pence rollout Saturday, when he went on, mostly about himself, for 4,000 words before yielding to his vice-presidential nominee: “I’ve been a very, very, very successful businessperson. … I won in landslides. … I dominated with the evangelicals.”

The situation was much the same on “60 Minutes” on Sunday: When Lesley Stahl called him “brash,” Trump countered that he’s “religious.” How’s that? “I won the evangelicals.”

Stahl observed that “you’re not known to be a humble man.”

Volleyed Trump: “I’m much more humble than you would understand.” Seconds later, he said people tell him, “you’re going to go down in the history books.”

There are signs that delegates have misgivings about their narcissistic nominee: The convention floor is quieter than usual, the roll call lethargic, the Trump merchandise booths uncrowded.