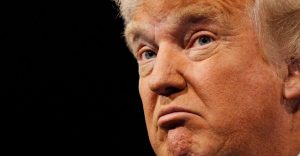 Donald Trump has seen Saturday Night Live’s cold open portrayal of him and it caused him to throw a hissy fit like a toddler.

Alec Baldwin once again turned in a brilliant and hilarious performance as the Republican nominee during the second debate and it was so goo that Donald Trump took to Twitter to criticize the actor and whine about the sketch.

“Watched Saturday Night Live hit job on me,” Trump wrote before calling for the show to end and accusing the media of rigging the election against him. “Time to retire the boring and unfunny show. Alec Baldwin portrayal stinks. Media rigging election!”

But he wasn’t done. An hour after that tweet he continued bitching about the media and complained about his poll numbers among women in an all caps meltdown repeatedly accusing them of rigging the election.

Polls close, but can you believe I lost large numbers of women voters based on made up events THAT NEVER HAPPENED. Media rigging election!

Then he accused the media and the Clinton campaign of working together to rig the election.

Election is being rigged by the media, in a coordinated effort with the Clinton campaign, by putting stories that never happened into news!

It’s so easy to make thin-skinned Donald Trump lose his sh*t that it only took a couple minute sketch on SNL to do it.

That means Trump could easily be provoked by leaders of other nations, only he would have access to the military and nuclear weapons as president, not just Twitter.

Clearly, Trump does not have the temperament necessary to be a world leader.

And his continued claims that the election is being rigged is dangerous because his supporters are now seriously threatening bloody rebellion and even the assassination of Hillary Clinton if she beats him on Election Day. Trump is not only proving that he is unfit for the presidency, he is openly undermining our democracy.