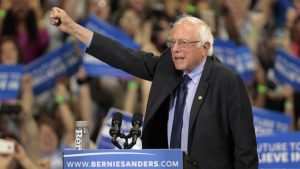 As pundits have begun changing their tunes ever-so-slightly, from “Bernie has no chance” to “it’s uphill, but Bernie has a chance and will at the very least have powerful leverage at the convention”, the senator has pulled out another victory in the West Virginia primary this evening.

The state primary was called for Senator Sanders by the AP with returns at the time they called it giving him a lead of 50% to Clinton’s 40%, and his lead was climbing.

The Sanders campaign has insisted that they will fight to the end in the convention itself and that they intend to lobby superdelegates in states where he has won the majority (in some cases the vast majority) of the popular vote whose superdelegates are still pledging to Clinton.

With each new win, and this looking to be another winning streak culminating in California, the DNC will want to take a long second look at the candidate who continues to poll very well against Trump.  Clinton actually loses in a couple of those polls and Sanders does not.

If they want to gamble on Clinton, we may very well end up with President Trump.

How about we avoid the nail-biter and go with President Sanders?