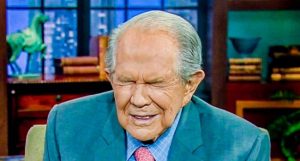 The late Jerry Falwell, leader of the Moral Majority and founder of Liberty University, built the religious right into a major political force.

His son Jerry Jr. is well on his way to destroying it.

Falwell fils, now Liberty’s president, was among the first and most prominent evangelical Christian leaders to embrace thrice-married, foul-mouthed casino mogul Donald Trump, declaring in January that Trump had lived his life in the spirit of Jesus. This endorsement validated Trump’s character for millions of evangelicals, helping to propel Trump to the Republican nomination. Falwell continued to campaign for Trump, spoke at the Republican convention and likened Trump to Winston Churchill in an August op-ed in The Washington Post.

Now the “Access Hollywood” video, in which Trump boasts in vulgar terms about sexually assaulting women, has caused late defections from Trump by Republican officeholders and conservative thought leaders.

But Falwell is standing by his man. He speculates that the leak of the video “might have even been a conspiracy among the establishment Republicans,” including House Speaker Paul Ryan (Wis.). Falwell allowed that what Trump said in the video was “reprehensible,” but he argued on New York’s WABC Radio that “we’re all sinners” and dismissed Trump’s words as “dumb comments on a videotape 11 years ago.”

Trump is creating a lot of wreckage as his campaign founders and he lashes out on Bill Clinton’s sexual misdeeds and even the late Ted Kennedy’s 1969 Chappaquiddick scandal. One of Trump’s victims is likely to be the religious conservative political movement, as many of its leaders have averted their gaze from Trump’s misogyny, hoping ends justify means.

Ralph Reed, formerly of the Christian Coalition, claims that for evangelical voters, “a 10-year-old tape of a private conversation with a TV talk-show host ranks pretty low on their hierarchy of their concerns.”

And Pat Robertson, founder of the Christian Broadcasting Network, dismissed Trump’s lewd video by saying the candidate was only “trying to look like he’s macho.”

These religious political leaders’ continued support of Trump undermines their claims to speak for traditional morality. And their political calculation — that they’re supporting Trump because he’d appoint conservative justices to the Supreme Court — appears to be backfiring, as well. Trump’s woes are putting the Senate (and perhaps the House) in jeopardy for Republicans, potentially depriving them of whatever defenses they would have had against Hillary Clinton’s nominees and policies.

Ryan has belatedly located his moral and political compasses and is making clear that his only goal now is to protect the House Republican majority. In fact, few conservatives are willing to advocate for Trump other than the likes of Rudy Giuliani and Fox News’s Sean Hannity, who defended Trump by saying, “King David had 500 concubines for crying out loud.”

In the past, religious-right leaders claimed to care about personal morality. “We will not rest until we have leaders of good moral character,” Reed said back in the Monica Lewinsky days. Evangelical leader James Dobson advocated Bill Clinton’s impeachment in 1998 because he set a bad example about “respecting women.”

But Dobson supports Trump, excusing his behavior because the candidate is a “baby Christian.” Franklin Graham, though formally neutral, draws equivalence between Trump’s “crude comments” and Democrats’ “godless” agenda.

There are a few evangelical leaders, including Russell Moore of the Southern Baptist Convention and Christianity Today executive editor Andy Crouch, who have tried to maintain their integrity. Theologian Wayne Gruden, who had endorsed Trump, now says, “I cannot commend Trump’s moral character, and I strongly urge him to withdraw from the election.”

And James MacDonald, who has been on Trump’s evangelical advisory council, called Trump’s words on the video “the kind of misogynistic trash that reveals a man to be lecherous and worthless … the guy who gets a punch in the head from worthy men.”

But where are the high-profile figures in the movement, such as Reed, Robertson and Falwell? In January, Falwell said Trump “lives a life of loving and helping others, as Jesus taught.” He likened Trump to his father.

Or maybe they’ll be wondering how differently things might have turned out if Falwell, with his ends-justify-the-means logic, hadn’t made a deal with the devil and destroyed the moral credibility of the movement his father built.