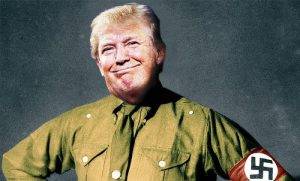 Donald Trump is not Adolph Hitler. Nor was Der Führer a rapacious Manhattan real estate developer who made several fortunes on the backs of poor working stiffs. But there are deeply uncomfortable similarities between Hitler’s satanic quest to Make Germany Great Again and Trump’s white-is-right campaign to do the same for Amerika . . . er, America. And woe to those who don’t see the similarities and the menace a Trump presidency represents.

I tread carefully, as well as with some trepidation, through this semantic mine field. After all, Trump’s grand scheme to deport 11 million illegal aliens, many of them longtime U.S. residents who have jobs, have raised families and unlike him pay taxes, is not the same as Hitler’s Final Solution. Nor is the U.S. in 2016 to be confused with the Weimar Republic in 1930. Besides which, using Nazi analogies is typically a loser’s game because comparing someone or something to Hitler or the Third Reich stifles debate, almost always is in bad taste and triggers inevitable side debates about whether calling someone a Nazi is as bad as calling them a “kike” or “nigger.”

Then there is Godwin’s Law, which states that as an online discussion grows longer, the probability of a comparison involving Nazis or Hitler approaches inevitability.
But Mr. Godwin can rest easy, because in a coincidence that is seriously serendipitous, a new biography on Hitler makes the case that there are deep similarities between Herr Donald and Der Führer. Without intending to do so.

The book is Hitler: Ascent (1889-1939) by Volker Ullrich, and the similarities — again, without intent — laid out by the German historian-journalist are so unsettling that there are accusations that Michiko Kakutani’s review in The New York Times is a thinly-veiled Trump comparison. It is not hard to see why. This is because just about everything that Kakutani says about Ullrich’s book reflects warnings that Trump should not be dismissed as just another crackpot who was born with a platinum spoon in his mouth.

Chillingly, Ullrich sets up his 1,008-page portrait by stripping away the mythology that Hitler created of himself in Mein Kampf as just another talented guy. He warns in an introduction that “In a sense, Hitler will be normalized — although this will not make him seem more ‘normal.’ If anything, he will emerge as even more horrific.”

Let’s go to the comparisons — yet again without intent — in Ullrich’s own words:

* Hitler was an egomaniac who “only loved himself,” a narcissist with a taste for self-dramatization and a “characteristic fondness for superlatives” who had a “keen eye for the strengths and weaknesses of other people.”

* Hitler had a “bottomless mendacity” that took advantage of the latest technology to spread his message and “was so thoroughly untruthful that he could no longer recognize the difference between lies and truth.”

* Hitler was an effective orator and adept at assuming various masks and feeding off the energy of his audiences, concealing his anti-Semitism beneath a “mask of moderation” when trying to win the support of middle-class liberals.

* Hitler specialized in big, theatrical rallies staged with spectacular elements and adapted the contents of his speeches “to suit the tastes of his lower-middle-class, nationalist-conservative, ethnic-chauvinist and anti-Semitic listeners.”

* Hitler peppered his speeches with coarse phrases and put-downs of hecklers and fomented chaos by playing to crowds’ fears and resentments in “offering himself as a visionary leader who could restore law and order.”

* Hitler presented himself in messianic terms, promising “to lead Germany to a new era of national greatness,” although he typically was vague about his actual plans while painting “the present day in hues that were all the darker.”

* Hitler virtually wrote the book on modern demagoguery by using repeated emotion-based “mantralike phrases” consisting largely “of accusations, vows of revenge and promises for the future.”

* Hitler’s ascension was aided and abetted by the naïveté of adversaries who failed to understand his ruthlessness and tenacity, as well as partners who believed “he was not serious or that they could exert a moderating influence on him.”

A Times spokeswoman has replied to critics of Kakutani by simply saying that her review “speaks for itself.”

It does indeed, and all the more loudly by never mentioning Trump by name. But then sometimes the strongest case is the silent one.