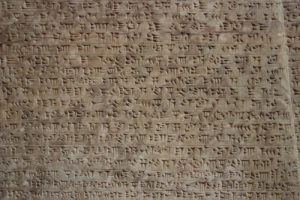 A relief of cuneiform writing from Assyria. / British Museum London

Writing is the physical manifestation of a spoken language. It is thought that human beings developed language c. 35,000 BCE as evidenced by cave paintings from the period of the Cro-Magnon Man (c. 50,000-30,000 BCE) which appear to express concepts concerning daily life. These images suggest a language because, in some instances, they seem to tell a story (say, of a hunting expedition in which specific events occurred) rather than being simply pictures of animals and people. Written language, however, does not emerge until its invention in Sumer, southern Mesopotamia, c. 3500 -3000 BCE. This early writing was called cuneiform and consisted of making specific marks in wet clay with a reed implement. The writing system of the Egyptians was already in use before the rise of the Early Dynastic Period (c. 3150 BCE) and is thought to have developed from Mesopotamian cuneiform (though this theory is disputed) and came to be known as heiroglyphics.

The phoenetic writing systems of the Greeks, and later the Romans, came from Phoenicia (hence, the name). The Phoenician writing system, though quite different from that of Mesopotamia, still owes its development to the Sumerians and their advances in the written word. Independently of the Near East or Europe, writing was developed in Mesoamerica by the Maya c. 250 CE (though some evidence suggests a date as early as 500 BCE).

Writing in China developed from divination rites using oracle bones c. 1200 BCE and appears to also have arisen independently as there is no evidence of cultural transference at this time between China and Mesopotamia. The ancient Chinese practice of divination involved etching marks on bones or shells which were then heated until they cracked. The cracks would then be interpreted by a Diviner. If that Diviner had etched `Next Tuesday it will rain’ and `Next Tuesday it will not rain’ the pattern of the cracks on the bone or shell would tell him which would be the case. In time, these etchings evolved into the Chinese script.

History is impossible without the written word as one would lack context in which to interpret physical evidence from the ancient past. Writing records the lives of a people and so is the first necessary step in the written history of a culture or civilization. A prime example of this problem is the difficulty scholars of the late 19th/early 20th centuries CE had in understanding the Mayan Civilization, in that they could not read the glyphs of the Maya and so wrongly interpreted much of the physical evidence they excavated. The early explorers of the Mayan sites, such as Stephens and Catherwood, believed they had found evidence of an ancient Egyptian civilization in Central America.

This same problem is evident in understanding the ancient Kingdom of Meroe (in modern day Sudan), whose Meroitic Script is yet to be deciphered as well as the so-called Linear A script of the ancient Minoan culture of Crete which also has yet to be understood.

The Invention of Writing

The Sumerians first invented writing as a means of long-distance communication which was necessitated by trade. With the rise of the cities in Mesopotamia, and the need for resources which were lacking in the region, long-distance trade developed and, with it, the need to be able to communicate across the expanses between cities or regions.

The earliest form of writing was pictographs – symbols which represented objects – and served to aid in remembering such things as which parcels of grain had gone to which destination or how many sheep were needed for events like sacrifices in the temples. These pictographs were impressed onto wet clay which was then dried, and these became official records of commerce. As beer was a very popular beverage in ancient Mesopotamia, many of the earliest records extant have to do with the sale of beer. With pictographs, one could tell how many jars or vats of beer were involved in a transaction but not necessarily what that transaction meant. As the historian Kriwaczek notes,

All that had been devised thus far was a technique for noting down things, items and objects, not a writing system. A record of `Two Sheep Temple God Inanna’ tells us nothing about whether the sheep are being delivered to, or received from, the temple, whether they are carcasses, beasts on the hoof, or anything else about them (63).

In order to express concepts more complex than financial transactions or lists of items, a more elaborate writing system was required, and this was developed in the Sumerian city of Uruk c. 3200 BCE. Pictograms, though still in use, gave way to phonograms – symbols which represented sounds – and those sounds were the spoken language of the people of Sumer. With phonograms, one could more easily convey precise meaning and so, in the example of the two sheep and the temple of Inanna, one could now make clear whether the sheep were going to or coming from the temple, whether they were living or dead, and what role they played in the life of the temple. Previously, one had only static images in pictographs showing objects like sheep and temples. With the development of phonograms one had a dynamic means of conveying motion to or from a location.

Further, whereas in earlier writing (known as proto-cuneiform) one was restricted to lists of things, a writer could now indicate what the significance of those things might be. The scholar Ira Spar writes:

This new way of interpreting signs is called the rebus principle. Only a few examples of its use exist in the earliest stages of cuneiform from between 3200 and 3000 B.C. The consistent use of this type of phonetic writing only becomes apparent after 2600 B.C. It constitutes the beginning of a true writing system characterized by a complex combination of word-signs and phonograms—signs for vowels and syllables—that allowed the scribe to express ideas. By the middle of the Third Millennium B.C., cuneiform primarily written on clay tablets was used for a vast array of economic, religious, political, literary, and scholarly documents. 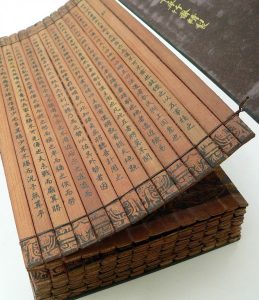 The Art of War by Sun-Tzu

This new means of communication allowed scribes to record the events of their times as well as their religious beliefs and, in time, to create an art form which was not possible before the written word: literature. The first writer in history known by name is the Mesopotamian priestess Enheduanna (2285-2250 BCE), daughter of Sargon of Akkad, who wrote her hymns to the goddess Inanna and signed them with her name and seal. The so-called Matter of Aratta, four poems dealing with King Enmerkar of Uruk and his son Lugalbanda, were probably composed between 2112-2004 BCE (though only written down between 2017-1763 BCE). In the first of them, Enmerkar and The Lord of Aratta, it is explained that writing developed because the messenger of King Enmerkar, going back and forth between him and the King of the city of Aratta, eventually had too much to remember and so Enmerkar had the idea to write his messages down; and so writing was born.

The Epic of Gilgamesh, considered the first epic tale in the world and among the oldest extant literature, was composed at some point earlier than c. 2150 BCE when it was written down and deals with the great king of Uruk (and descendent of Enmerkar and Lugalbanda) Gilgamesh and his quest for the meaning of life. The myths of the people of Mesopotamia, the stories of their gods and heroes, their history, their methods of building, of burying their dead, of celebrating feast days, were now all able to be recorded for posterity.

So important was writing to the Mesopotamians that, under the Assyrian King Ashurbanipal (685-627 BCE) over 30,000 clay tablet books were collected in the library of his capital at Nineveh. Ashurbanipal was hoping to preserve the heritage, culture, and history of the region and understood clearly the importance of the written word in achieving this end. Among the many books in his library, Ashurbanipal included works of literature, such as the tale of Gilgamesh or the story of Etana, because he realized that literature articulates not just the story of a certain people, but of all people. The historian Durant writes:

Literature is at first words rather than letters, despite its name; it arises as clerical chants or magic charms, recited usually by the priests, and transmitted orally from memory to memory. Carmina, as the Romans named poetry, meant both verses and charms; ode, among the Greeks, meant originally a magic spell; so did the English rune and lay, and the German Lied. Rhythm and meter, suggested, perhaps, by the rhythms of nature and bodily life, were apparently developed by magicians or shamans to preserve, transmit, and enhance the magic incantations of their verse. Out of these sacerdotal origins, the poet, the orator, and the historian were differentiated and secularized: the orator as the official lauder of the king or solicitor of the deity; the historian as the recorder of the royal deeds; the poet as the singer of originally sacred chants, the formulator and preserver of heroic legends, and the musician who put his tales to music for the instruction of populace and kings. 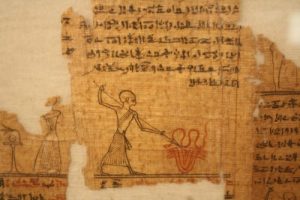 A detail from a Book of the Dead, on papyrus showing hieratic writing of Hornefer, Ptolemaic Period, provenance unknown. (Museo Castello Sforzesco, Milan)

The role of the poet in preserving heroic legends would become an important one in cultures throughout the ancient world. The Mesopotamian scribe Shin-Legi-Unninni (wrote 1300-1000 BCE) would help preserve and transmit The Epic of Gilgamesh. Homer (c. 800 BCE) would do the same for the Greeks and Virgil (70-19 BCE) for the Romans. The Indian epic Mahabharata (written down c. 400 BCE) preserves the oral legends of that region in the same way the tales and legends of Scotland and Ireland do. All of these works, and those which came after them, were only made possible through the advent of writing.

The early cuneiform writers established a system which would completely change the nature of the world in which they lived. The past, and the stories of the people, could now be preserved through writing. The Phoenicians’ contribution of the alphabet made writing easier and more accessible to other cultures, but the basic system of putting symbols down on paper to represent words and concepts began much earlier.  Durant notes:

The Phoenicians did not create the alphabet, they marketed it; taking it apparently from Egypt and Crete, they imported it piecemeal to Tyre, Sidon, and Byblos, and exported it to every city on the Mediterranean; they were the middlemen, not the producers, of the alphabet. By the time of Homer the Greeks were taking over this Phoenician – or the allied Aramaic – alphabet, and were calling it by the Semitic names of the first two letters, Alpha, Beta; Hebrew Aleph, Beth.

Early writing systems, imported to other cultures, evolved into the written language of those cultures so that the Greek and Latin would serve as the basis for European script in the same way that the Semitic Aramaic script would provide the basis for Hebrew, Arabic, and possibly Sanskrit. The materials of writers have evolved as well, from the cut reeds with which early Mesopotamian scribes marked the clay tablets of cuneiform to the reed pens and papyrus of the Egyptians, the parchment of the scrolls of the Greeks and Romans, the calligraphy of the Chinese, on through the ages to the present day of computerized composition and the use of processed paper.

In whatever age, since its inception, writing has served to communicate the thoughts and feelings of the individual and of that person’s culture, their collective history, and their experiences with the human condition, and to preserve those experiences for future generations.