A rare Italian majolica dish in the Getty’s collection has a tiny double 1,700 miles away, at a miniatures museum in Kansas City.

A remarkably beautiful and rare majolica dish, decorated with a striking pattern of radiating peacock feathers and pointed leaves, is just one piece of the J. Paul Getty Museum’s world-class collection of European ceramics. As you walk along the curving wall of the North Pavilion’s Gallery 101 at the Getty Center, you’ll notice a line of nine Italian majolica dishes from the fifteenth and sixteenth centuries. The first dish you see is believed to come from Deruta, Italy, and dates from about 1470–1500. Tin-glazes of orange, dark purple, green, and blue cover the nearly 16-inch-wide tan earthenware ceramic body. The white lead-glazed background is filled with blue dots and swirling leafy vines. The contour of the dish slopes down from a wide rim into the center creating a shallow basin where the unknown maker painted concentric orange and blue bands encircling a gently twisting star-shaped flower.

Few majolica works with purely graphic patterns like these survive today. This type of decoration was reserved for objects that were used daily, making them prone to chips and breaks. The other eight dishes in this case were most likely made for display rather than for serving or eating. Dishes with designs like coats of arms, pictorial scenes, profile busts, and animals served a feast for the eyes only.

The peacock feather motif is believed to be of Islamic origin. Craftsman from North Africa, Spain, and the eastern Mediterranean brought their work to Italy, where local craftsman picked up elements of design from the Islamic world.

A Love for Miniatures

The first time I encountered this remarkable dish, it was like seeing an old friend. I didn’t know the dish from a previous visit, a book, or a class I had taken in school. Rather, I knew its twin that resides at a very different type of institution. The dish that I knew was in the collection of the National Museum of Toys and Miniatures (T/m) in Kansas City, Missouri, in the form of a replica made by artist Jeffrey Guéno that is only 2 1/8 inches in diameter. 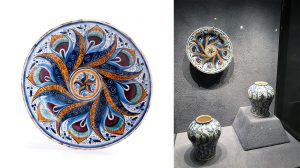 Before I came to work at the Getty Museum this past January, I spent almost a year working at this spectacular but little-known museum dedicated to the collection and display of toys and miniatures. To visitors I would say that the museum was like having a world-class collection of decorative arts, architecture, and interiors that you could fit in a shoebox. Miniatures afford the opportunity to marvel at the craftsmanship of contemporary makers, while also appreciating and learning about design, craftsmanship, and material culture of times past.

T/m is located in a spectacular 1911 Italianate mansion built for Dr. Herbert Tureman and his wife in the Brookside neighborhood of Kansas City. The Tureman mansion began a new life in 1982 as a museum that is home to the world’s largest collection of fine-scale miniatures and one of the country’s largest collections of antique toys on public display. Mary Harris Francis and Barbara Marshall, two friends from prominent Kansas City families, both loved to collect. Mary’s passion was dollhouses, and Barbara’s miniatures.

While accompanying her husband on a business trip to New York City in the 1950s, Barbara stumbled upon the gallery of fine-scale miniature maker Eric Pearson. She purchased a rocking chair from him that stood three inches tall. This rocking chair began a lifetime of dedication to miniature artists and the institution that she would later found with Mary. Barbara only collected the highest-quality miniatures, and often commissioned makers to carry out their dream projects. One such commission was Twin Manors, an eighteenth-century American mansion that took artist William R. Robertson nine years to complete.

The Fine-Scale Designs of Jeffrey Guéno

Jeffrey Guéno, the creator of the mini majolica dish, is one of many fine-scale miniature makers from around the world who for the past century have turned out remarkable objects at only a fraction of the size of their real-world counterparts—most commonly, 1/12th scale. These artists also stay as true as possible to the original materials and methods. At times the materials and methods used to create the original object do not translate well to the small scale, so the artist must adapt. In the case of the peacock dish, Guéno  had to alter the glazing process. Rather than applying an opaque white base layer to the earthenware clay, as was done on the dish in the Getty’s collection, Guéno  painted the designs directly onto the already white clay body, and then added a clear glaze over the decorative designs.

Fine-scale miniatures may look like dollhouse furniture, but they are certainly not toys. With a rigorous adherence to scale, materials and methods, these remarkably tiny objects are made for the visual delight of collectors rather than as a child’s plaything.

Based in Louisiana, Guéno  has been making miniatures since the mid-1980s and has worked extensively re-creating Italian majolica and French porcelain in miniature. He worked with partner Frank Hanley under the name Le Chateau Interiors until 1999, when Hanley passed away. In addition to his work in ceramics, Guéno  has also created miniature furniture and paintings.

Just last year Guéno resumed work in his new studio after a short break from making miniatures. When I asked him why he chose to reproduce the Getty’s Peacock Dish, he said, “Because it’s so beautiful!” He was also enticed by the challenge of reproducing its intricate details. The Peacock Dish was done in 1/6th scale, but Guéno tells me that he is back making majolica in 1/12th scale. Imagine the fine work needed if the Peacock Dish were only the size of a dime! Guéno has visited the Getty, but has never seen this particular dish. Instead, he used photographs in one of his many books on Italian majolica to create the miniature. 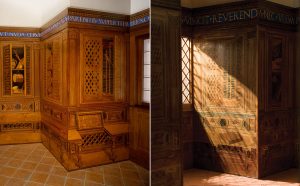 A miniature replica of a Renaissance studiolo, and the real thing in The Met. Can you tell which is which? (Find the answer below.)

The lion’s share of fine-scale miniatures depict American and European decorative arts, interiors, and architecture. A common way to display the work is in the format of a “room box.” The artist creates a complete interior scene but with the fourth wall removed, and set flush into a wall at eye level.

My favorite “room box” at T/m is a replica of the Studiolo from the Ducal Palace in Gubbio, also from fifteeenth-century Italy, by Ursula Dyrbye-Skovsted, Barry Hipwell, Nic Stowe, and Johannes Landman. The full-sized room is in the collection of the Metropolitan Museum of Art in New York City. A miniature interior like the Studiolo Gubbio is often a collaboration of many artists. They each bring to the table their specialized skills with a particular medium, be it metalwork, painting, or marquetry, to create all of the elements that make up the interior. With the images of the room box and the full-sized period room placed side by side, it is difficult to tell which is which. Can you guess correctly? (See the bottom of this post for the answer.)

My surprise encounter with the peacock dish showed me how a small museum like T/m has more in common with grand institutions like the Getty or the Met than I previously thought. With the help of curatorial assistants like me, they are working to share knowledge about decorative arts through exhibitions, publications, and their presence on the web. While the Getty and the Met collect, conserve, display, and research the real thing, T/m and other miniature museums around the world (yes, there are more!) honor the genius of these objects through impossibly small replicas. Imitation, as we know, is the sincerest form of flattery.