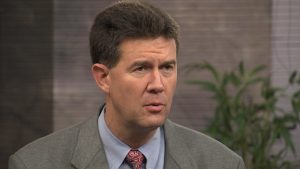 Alabama Secretary of State John Merrill has a big problem with increasing the number of registered voters in his state.

Slate reports that Merrill, like many Republicans, opposes recent reforms in voter registration policies that could significantly increase the number of registered voters.

The proposal would automatically register eligible state residents “who interact with government agencies” to vote. According to the Brennan Center, this legislation would also guarantee that voter-registration information is moved on to election officials electronically, which will reduce errors in the voting process.

However, Merrill says that he stands opposed to this initiative because it “cheapen[s] the work” of civil rights activists, adding that “just because you turned 18 doesn’t give you the right [to vote].”

“These people fought, some of them were beaten, some of them were killed because of their desire to ensure that everybody that wanted to had the right to register to vote and participate in the process,” Merrill explained in an interview with the voting rights initiative, Answering the Call.

He then went on to reference several civil rights leaders, like Georgia U.S. Rep. John Lewis, who Merrill claimed called him a friend.

Merrill continued, “I’m not going to embarrass them by allowing someone that’s too sorry to get up off of their rear end to go register to vote … because they think they deserve the right because they turned 18.”

The jackass then went on to say that automatically registering teen voters to be able to exercise their right to vote is “no different than giving them a trophy because they played on the ball team. You only get a trophy if you win!”

“I think it’s a sorry, lazy way out and it shows no initiative.”

Alabama joins 14 other states who have enacted new voting restrictions ahead of the 2016 presidential election. The Brennan Center says that these actions are designed to “curtail voting rights.”

The New York Times reported last year that the restrictions Alabama put in place included a photo ID law, which makes having a government issued ID mandatory to participate in the voting process.

The biggest problem with these identification laws is that many older and poorer citizens are faced with hardships when it comes to obtaining the necessary paperwork needed to get a government I.D. Many states also structure the office hours of their DMV services and polling locations to discourage people further from voting.

The bottom line is that Republicans love low voter turn out because they can’t convince the vast majority of Americans that their ideas are good for the country.