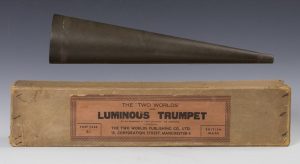 Why does one of the world’s great research libraries have ‘ectoplasm’, a spirit trumpet and beard hair posted to Charles Darwin among its eight million books, manuscripts and digital collections?

The answers lie in the second major exhibition of Cambridge University Library’s 600th anniversary – Curious Objects – which puts on display a collection of curiosities that has been centuries in the making.

Opening to the public on November 3, and following on from the hugely successful Lines of Thought, the exhibits on display in Curious Objects cover all corners of the globe and every era of human history, from the Stone Age to the Space Age.

Research for the exhibition has turned up new and rediscovered finds – including the oldest objects in the Library, two black-topped redware pots from Predynastic Egypt, and the oldest written artefact, a Sumerian clay tablet from around 2200 BCE.

As one of only six Legal Deposit libraries in the UK and Ireland, Cambridge University Library has been entitled to a copy of every UK publication since 1710. But it also predates the era of most modern museums and collections, meaning that over the centuries, it has been a depository for all manner of objects, all of which have a part to play in telling the story of one of the world’s greatest libraries.

Among the curious objects going on display are:

“Shabby and beautiful, quirky and controversial, all the objects on display in our new exhibition provoke our curiosity and prompt questions about the nature of libraries – past present and future,” said Professor Christopher Young, Acting University Librarian.

Paper dolls from the wooden theatre on display in Curious Objects

“Over 600 years, Cambridge University Library has revealed the story of the world around us and the universe beyond – not only through its printed and manuscript treasures, but through this unique and wonderful ‘cabinet of curiosities’ that opens a window onto the nature of collecting.”

As well as the objects listed above, because of its Legal Deposit status, the University Library also has a significant collection of children’s toys, board games and models – often supplied with children’s books and magazines – which continue to arrive at the Library every week.

Cambridge University Library is home to the archive of the Society for Psychical Research, on deposit since 1989 and including the ‘ectoplasm’ and spirit trumpet among a number of artefacts. The Library also holds the collections of the Royal Commonwealth Society, a treasure-trove of information on the Commonwealth and Britain’s former colonial territories, containing some forty objects in addition to more than 300,000 printed items, about 800 archival collections and over 120,000 photographs.

“Our curiosity has been rewarded with some exciting finds,” said Dr Jill Whitelock, Head of Special Collections and Lead Curator. “We’ve opened cupboards and found wall paintings from Pompeii, opened a box of medals and found an ancient clay tablet carefully wrapped in tissue paper. It’s wonderful to think that after 600 years there’s still so much to explore in the Library. We hope visitors to the exhibition will enjoy discovering our curious objects too – where else can you see ‘ectoplasm’ alongside Egyptian artefacts?”