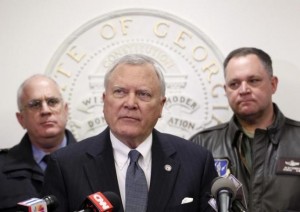 Georgia Governor Nathan Deal said on Monday he will veto a so-called religious freedom bill passed by the state legislature that has drawn national criticism for discriminating against same-sex couples.

The measure, which states that no pastor can be forced to perform a same-sex wedding, was recently passed by the Republican-controlled legislature.

Under the bill, faith-based groups could not be forced to hire or retain an employee whose beliefs run counter to the organization’s, while churches and religious schools would have the right to reject holding events for people or groups to whom they object.

Deal, a Republican, said he could not support the legislation, which had drawn wide criticism from corporations and had triggered threats of a state boycott by the entertainment industry.

Deal said he was not bullied into his decision but felt a law was not necessary.

“I do not think that we have to discriminate against anyone to protect the faith-based community in Georgia,” Deal said at news conference on the legislation, noting his religious faith.

Similar bills in states such as Indiana and Arkansas sparked storms of criticism last year, forcing many lawmakers to retreat, and North Carolina is currently seeing protest over a new law that bars transgender people from choosing bathrooms consistent with their gender identity.

“Our message to Governor Nathan Deal was loud and clear: this deplorable legislation was bad for his constituents, bad for business, and bad for Georgia’s future,” HRC President Chad Griffin said in a statement.

He added that Deal had “set an example for other elected officials to follow.”

Mike Griffin, spokesman for the Georgia Baptist Convention, which lobbied for the bill, said his group’s 1.3 million members will continue fighting for it.

“All we wanted was protection from government overreach,” he said, noting his disappointment in Deal, a two-term governor. “We feel that he’s let down the people of faith and all of Georgia by not signing the bill.”

More than 300 large corporations and small businesses, including Delta Airlines and Coca Cola also came out against it.