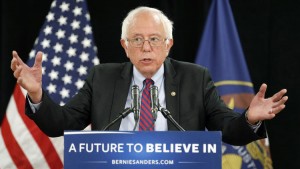 uring a recent town hall in Columbus, Ohio, Sen. Bernie Sanders said the unthinkable. At least, you would have thought he did, judging by the response of several Democratic operatives. Sanders was deemed “extremely disgraceful” by Donna Brazile, vice chair of the Democratic National Committee, and “a political calculating fraud” by Brad Woodhouse, a former DNC communications director.

What was his crime? The old-fashioned Rooseveltian New Dealer had answered a question about why he is running as a Democrat instead of as an independent with typical candor: “In terms of media coverage, you had to run within the Democratic Party,” he observed, adding that he couldn’t raise money outside the major two-party process.

As one of the more successful third-party presidential candidates in recent U.S. history, I know firsthand the obstacles Sanders might have faced if he had run as an independent. The reality is that Sanders is right, and the backlash against him reflects all too well what two-party tyranny can do to a more-than-nominal third-party challenger. This is especially true of candidates like Sanders, who — despite advancing political views similar to the classic Democratic New Deal platform — now sits well to the left of the party’s corporatist, hawkish establishment.