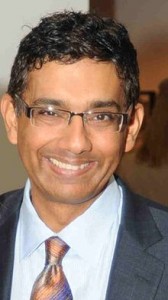 Dinesh is at it again.

Recall that in 2014 he plead guilty to making illegal campaign contributions and was sentenced to eight months confinement and five years probation.  In 2012, two years earlier, he produced a mockumentary in which he supposedly exposed “third-world views” of President Obama.  Apparently he egocentrically felt this was major criticism, though it was really unnoticed by most.

Upon his conviction in 2014, he said he was targeted because of that barely-noticed production and persecuted because of it.  Ah, there’s that word – persecution.  He committed a crime to which he confessed, but that doesn’t matter.  He was magically chosen out of the vast number of Obama critics for this persecution.  The man is even egocentric in crime.

He is set to release another such mockumentary very soon, and he claims that this one will, in his words, “…earn me life in prison.”  Can you see the preparation here?  Here’s what I see in his little mind:

“I’m going to make another barely-noticed production.  Then I’m going to blatantly break the law again.  Then if they charge me, I’m going to claim persecution!  Yeah, this is golden!”

What ever happened to the “personal responsibility” mantra of he and his friends.  Those of us who actually believe in that aren’t going to buy his persecution complex.

Even the not-so-mighty make a sound when they fall.