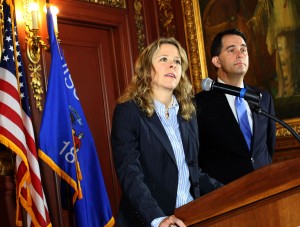 In October 2015, Wisconsin Governor Scott Walker appointed Rebecca Bradley to the state’s supreme court following the death of Justice N. Patrick Crooks.  She is now up for election to the bench against Appeals Court Judge JoAnne Kloppenburg, and in several columns written by Bradley as a college student in 1992 for the Marquette Tribune at Marquette University is causing a stir.

In the columns, Bradley expressed opinions in a way that eerily brings Trump to mind today when writing about the election of Bill Clinton in 1992.  She wrote the following:

One will be better off contracting AIDS than developing cancer, because those afflicted with the politically-correct disease will be getting all of the funding.  How sad that the lives of degenerate drug addicts and queers are valued more than the innocent victims of more prevalent ailments.

We have now elected a tree-hugging, baby-killing, pot-smoking, flag-burning, queer-loving, bull-spouting ’60s radical socialist adulterer to the highest office in our nation.  Doesn’t it make you proud to be an American? We’ve just had an election which proves the majority of voters are either totally stupid or entirely evil.

[Homosexuality] is an abnormal sexual preference…homosexuals and drug addicts who do essentially kill themselves and others through their own behavior deservedly receive none of my sympathy.

Called on the carpet for this after obviously poor vetting by Walker and now moving into the election, she released the following statement:

I was writing as a very young student, upset about the outcome of that presidential election and I am frankly embarrassed at the content and tone of what I wrote those many years ago.  To those offended by comments I made as a young college student, I apologize, and assure you that those comments are not reflective of my worldview. These comments have nothing to do with who I am as a person or a jurist, and they have nothing to do with the issues facing the voters of this state.

To be fair, we’ve all said and done things in our younger years (even as college seniors) that are sources of shame and regret for us today.  I won’t hold any college student’s opinions against her/him many years from now if those opinions have changed.  That is the problem here – we don’t know whether hers have or not.

Words are shallow, Judge Bradley.  A simply “I’m sorry” and “I don’t believe that anymore” don’t count.  Let’s dig deeper into your past and discover by your actions in decisions and other writings exactly how much those words long ago “are not reflective” of your “worldview” or you “as a person or a jurist.”

If your writings and actions over the years reflect a change, then I will join the “hey college kids can be a little crazy and haven’t enough life experience yet” chorus.  If they do not, then who you were then is who you are today.

If that is who you are today, you have no business on the bench.