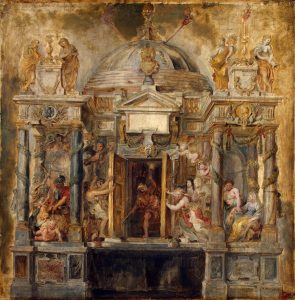 On January 1, we consider the origins of Janus, after whom this month is named.

January 1 can be a day of regret and reflection – did I really need that fifth glass of bubbly last night? – mixed with hope and optimism for the future, as we make plans to renew gym memberships or finally sort out our tax files. This January ritual of looking forward and backward is fitting for the first day of a month named after Janus, the Roman god of beginnings and endings.

Doorkeeper of the heavens

In Roman mythology, Janus was a king of Latium (a region of central Italy), who had his palace on the Janiculum hill, on the western bank of the River Tiber. According to the Roman intellectual Macrobius, Janus was given divine honours on account of his own religious devotion, as he set a pious example for all his people. 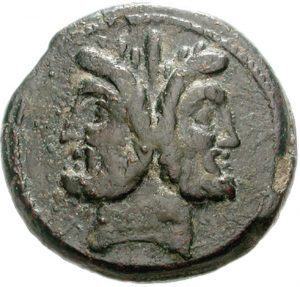 Janus was proudly venerated as a uniquely Roman god, rather than one adopted from the Greek pantheon. All forms of transition came within his purview – beginnings and endings, entrances, exits, and passageways. The name Janus (Ianus in Latin, as the alphabet had no j) is etymologically related to ianua, the Latin word for door. Janus himself was the ianitor, or doorkeeper, of the heavens.

The cult statue of Janus depicted the god bearded with two heads. This meant that he could see forwards and backwards and inside and outside simultaneously without turning around. Janus held a staff in his right hand, in order to guide travellers along the correct route, and a key in his left to open gates. 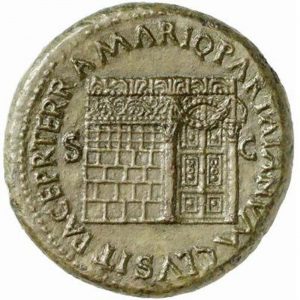 Shrine of Janus, as depicted on a coin of the emperor Nero. Wikimedia Commons

Janus is famously associated with the transition between peace and war. Numa, the legendary second king of Rome, who was famed for his religious piety, is said to have founded a shrine to Janus Geminus (“two-fold”) in the Roman Forum, close to the Senate House. It was located in the place where Janus had bubbled up a spring of hot boiling water in order to thwart an attack on Rome by the Sabines.

The shrine was an enclosure formed by two arched gates at each end, joined together by walls to form a passageway. A bronze statue of Janus stood in the middle, with one head facing towards each gate. According to the historian Livy, Numa intended the shrine:

as an index of peace and war, that when open it might signify that the nation was in arms, when closed that all the peoples round about were pacified.

The gates of Janus are said to have stayed closed for 43 years under Numa, but rarely remained so thereafter, although the first emperor Augustus boasted that he closed the shrine three times. Nero later celebrated his conclusion of peace with Parthia by minting coins showing the gates of Janus firmly shut. 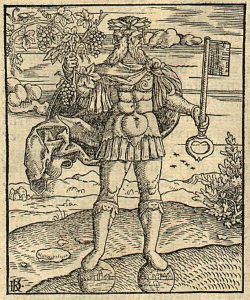 Romans believed that the month of January was added to the calendar by Numa. The association between Janus and the calendar was cemented by the construction of 12 altars, one for each month of the year, in Janus’s temple in the Forum Holitorium (the vegetable market). The poet Martial thus described Janus as “the progenitor and father of the years”.

From 153 BC onwards, the consuls (the chief magistrates of the Republic) took office on the first day of January (which the Romans called the Kalends). The new consuls offered prayers to Janus, and priests dedicated spelt mixed with salt and a traditional barley cake, known as the ianual, to the god. Romans distributed New Year’s gifts of dates, figs, and honey to their friends, in the hope that the year ahead would turn out to be sweet, as well as coins – a sign of hoped-for prosperity.

Janus assumed a key role in all Roman public sacrifices, receiving incense and wine first before other deities. This was because, as the doorkeeper of the heavens, Janus was the route through which one reached the other gods, even Jupiter himself. The text On Agriculture, written by Cato the Elder, describes how offerings would be made to Janus, Jupiter, and Juno as part of the pre-harvest sacrifice to ensure a good crop.

So if you’re feeling caught between two worlds this January 1, why not head outside and celebrate Roman-style? Pack up some sweets to share, grab your keys, and shut the door on 2017.