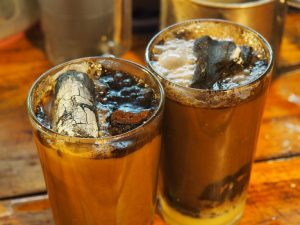 If you’re looking for a new and interesting way to enjoy your daily cup of java, try dumping a lump of hot coal into it. The trick worked for a small coffee stall owner in Indonesia who has become famous for his sizzling charcoal coffee.

The Indonesian city of Yogyakarta is perhaps the only place in the world where you can have your coffee served with a piece of red-hot coal. It’s called “Kopi Joss” and it was apparently invented back in the 1960s, by a local coffee stall owner known only as Mr. Man, to help him deal with a troubled stomach. The current stall operator, Alex, says that Mr. Man, who has since past away, was making his coffee as usual, when he laid eyes on the burning coal that he used to boil the water, and an idea popped into his head. His stomach was giving him problems and thought that the coal could make it better. So he took a piece of hot coal and dumped into a cup of coffee. It worked, and he since started selling it to brave customers as well. 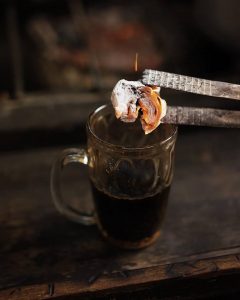 Today, trying a glass of kopi joss at Mr. Alex’s stall is one of the main tourist attractions of Yogykarta, but he says that it wasn’t always this way. Back when Mr. Man started serving the bizarre drink, only local students and undergrads were crazy enough to try it, but as the word spread of the medicinal properties of the drink, more people stopped by to give it a try. Today, it’s mainly a novelty for tourists, but Mr. Alex claims that it can help alleviate bloating, nausea, heartburn or diarrhea. 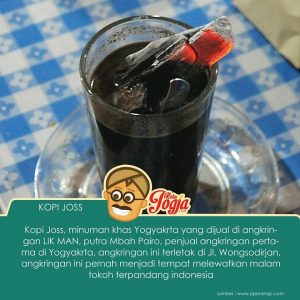 Kopi joss, or charcoal coffee, starts off as regular coffee in Central Java. Ground coffee and four spoons of sugar are poured into a glass, and them boiling water is added. Then, Mr.s Alex picks up a lump of red hot coal with his tongs and sumps into the glass as well. That causes the coffee to bubble over and sometimes spill over the glass, so if you’re putt off by coffee grounds all over your glass, this drink may not be for you. Once the coal cools, you can take it out of the coffee and enjoy the drink. 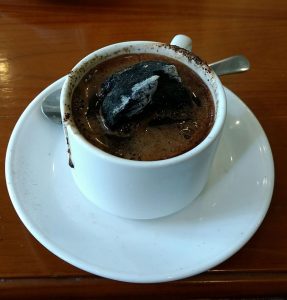 Apparently, local students frequenting Mr. Alex’s coffee stall analyzed kopi joss and found that it has a lower caffeine content than regular coffee, because the coal absorbs some of it. The special ingredient also neutralizes the acidity of the coffee, making it easier on the stomach.

While some of those who have tried this unique type of coffee claim that it tastes the same as regular java, others claim that it has a slight taste of caramel, because the hot coal burns the suga added to the coffee. You’ll just have to try it for yourself to find out. A glass will set you back just 4,000 rupiah (¢30).