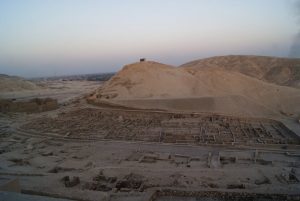 The village of Deir el-Medina in the West Bank of Luxor, Egypt. Anne Austin, Author provided

Records show that the Egyptian state provided health care to workers building royal tombs more than 3,000 years ago. But it was more about productivity than altruism. 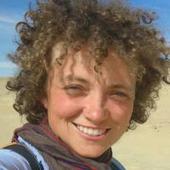 We might think of state supported health care as an innovation of the 20th century, but it’s a much older tradition than that. In fact, texts from a village dating back to Egypt’s New Kingdom period, about 3,100-3,600 years ago, suggest that in ancient Egypt there was a state-supported health care network designed to ensure that workers making the king’s tomb were productive.

The village of Deir el-Medina was built for the workmen who made the royal tombs during the New Kingdom (1550-1070 BCE). During this period, kings were buried in the Valley of the Kings in a series of rock-cut tombs, not the enormous pyramids of the past. The village was purposely built close enough to the royal tomb to ensure that workers could hike there on a weekly basis. 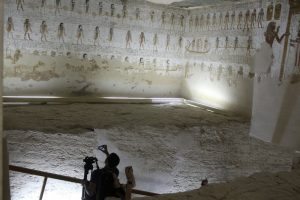 Paintings on the walls of King Merneptah’s tomb in the Valley of the Kings. Workers living in Deir el-Medina would have worked on tombs like this. Asmaa Waguih/Reuters

These workmen were not what we normally picture when we think about the men who built and decorated ancient Egyptian royal tombs – they were highly skilled craftsmen. The workmen at Deir el-Medina were given a variety of amenities afforded only to those with the craftsmanship and knowledge necessary to work on something as important as the royal tomb.

The village was allotted extra support: the Egyptian state paid them monthly wages in the form of grain and provided them with housing and servants to assist with tasks like washing laundry, grinding grain and porting water. Their families lived with them in the village, and their wives and children could also benefit from these provisions from the state.

Out sick? You’ll need a note 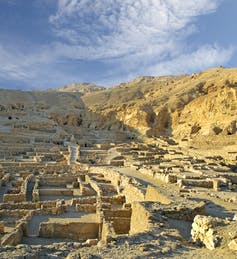 Among these texts are numerous daily records detailing when and why individual workmen were absent from work. Nearly one-third of these absences occur when a workman was too sick to work. Yet, monthly ration distributions from Deir el-Medina are consistent enough to indicate that these workmen were paid even if they were out sick for several days.

These texts also identify a workman on the crew designated as the swnw, physician. The physician was given an assistant and both were allotted days off to prepare medicine and take care of colleagues. The Egyptian state even gave the physician extra rations as payment for his services to the community of Deir el-Medina.

This physician would have most likely treated the workmen with remedies and incantations found in his medical papyrus. About a dozen extensive medical papyri have been identified from ancient Egypt, including one set from Deir el-Medina.

These texts were a kind of reference book for the ancient Egyptian medical practitioner, listing individual treatments for a variety of ailments. The longest of these, Papyrus Ebers, contains over 800 treatments covering anything from eye problems to digestive disorders. As an example, one treatment for intestinal worms requires the physician to cook the cores of dates and colocynth, a desert plant, together in sweet beer. He then sieved the warm liquid and gave it to the patient to drink for four days. 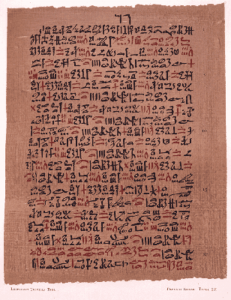 A sample of the Papyrus Ebers. Via Aoineko/Wikimedia Commons

Just like today, some of these ancient Egyptian medical treatments required expensive and rare ingredients that limited who could actually afford to be treated, but the most frequent ingredients found in these texts tended to be common household items like honey and grease. One text from Deir el-Medina indicates that the state rationed out common ingredients to a few men in the workforce so that they could be shared among the workers.

Despite paid sick leave, medical rations and a state-supported physician, it is clear that in some cases the workmen were actually working through their illnesses.

For example in one text, the workman Merysekhmet attempted to go to work after being sick. The text tells us that he descended to the King’s Tomb on two consecutive days, but was unable to work. He then hiked back to the village of Deir el-Medina where he stayed for the next ten days until he was able to work again. Though short, these hikes were steep: the trip from Deir el-Medina to the royal tomb involved an ascent greater than climbing to the top of the Great Pyramid. Merysekhmet’s movements across the Theban valleys were likely at the expense of his own health.

This suggests that sick days and medical care were not magnanimous gestures of the Egyptian state, but were rather calculated health care provisions designed to ensure that men like Merysekhmet were healthy enough to work.

Family was a social safety net

When family members neglected these responsibilities, there were fiscal and social consequences. In her will, the villager Naunakhte indicates that even though she was a dedicated mother to all of her children, four of them abandoned her in her old age. She admonishes them and disinherits them from her will, punishing them financially, but also shaming them in a public document made in front of the most senior members of the Deir el-Medina community.

This shows us that health care at Deir el-Medina was a system with overlying networks of care provided through the state and the community. While workmen counted on the state for paid sick leave, a physician, and even medical ingredients, they were equally dependent on their loved ones for the care necessary to thrive in ancient Egypt.