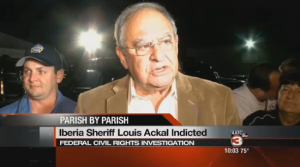 Louisiana Iberia Parish Sheriff Louis M. Ackal has been indicted by a grand jury for his part in the beating of inmates as they were in a jail chapel, according to KATC-3 News.

Ackal was in the news not long ago with his addition of stickers to all department vehicles bearing “In God We Trust” as part of the stampede to include God in any way possible, in this case by using the nation’s motto adopted in the mid-20th century and leaving the motto chosen by our Founders – “E Pluribus Unum” – behind.

Ackal and Lt. Col. Gerald Savoy were indicted today on civil rights violations for their parts in inmate beatings. Their indictments mean 10 current and former IPSO employees have been charged in the federal probe into misconduct at the Iberia Parish Sheriff’s Office.

The indictment, handed down by a Grand Jury today, names five inmates who were assaulted in the Iberia Parish jail chapel in April 2011. The chapel was chosen because it was not under video surveillance.

Ackal and Savoy, along with several deputies, arrived at the jail on that day to assist in a contraband search. Ackal allegedly ordered Byron Lassalle, a former employee who pleaded guilty last month, to “take care” of an inmate who made a lewd comment. Then he and Savoy watched Lassalle ask then-warden Wesley Hayes if there was a place in the jail without cameras. Hayes directed him to the chapel, where the inmate was beaten with batons.

The Sheriff seems to have gotten a bit confused on Christian behavior in a “House of God”, which according to Christians a chapel is supposed to be, one would assume.

Ackal and Savoy each face a maximum sentence of 10 years in prison for each of the civil rights violations, as well as a potential $250,000 fine for each count