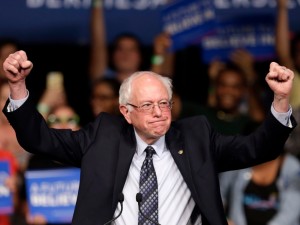 Sanders takes the most delegates at Nevada County Conventions. But who has won the state? We won’t know that until the Nevada Democratic convention in June.

Bernie Sanders scored a “surprise victory” over Hillary Clinton in Nevada on Saturday, taking 55% of the state delegates allocated on Saturday. With this win, at the June state convention the Sanders campaign has seats for 2,124 delegates and the Clinton campaign, 1,722.

The surprise came from the difference in this vote and the precinct-level vote. In February, Clinton won, 53-47%.

1. What does it mean “to win” at a county convention?

On Saturday, more delegates at the county conventions picked Sanders than picked Clinton.

When they were selected to attend the county convention at the February precinct caucus, each delegate was associated with a candidate. People supporting Clinton elected their delegates; people supporting Sanders did the same.

When they registered for Saturday’s conventions, these county convention delegates indicated their presidential preference. Ethically, they should have remained true to the candidate they said that they were supporting in February, otherwise they would disenfranchise the people who voted for them as a delegate. However, these are non-binding affiliations.

2. What happened on Saturday?

“News” reports like this one from the Washington Post are misleading and imply that the Sanders campaign did something nefarious:

Sanders’s supporters flooded the largest of those, in Clark County, where Las Vegas is located. As a result of his organizational muscle and some complicated rules, the senator from Vermont managed to garner more support there than Clinton, despite her edge on Feb. 20.

1. The rules aren’t complicated: if you ran as a delegate in February, you were pledging to your neighbors that you’d attend the county convention and represent them there.

Voters elected about 9,000 delegates in February. Less than 4,000 showed up in April.

Nearly 9,000 delegates were elected on caucus day in late February, but only 3,825 showed up to Saturday’s convention [in Clark County]. An additional 915 elected alternates and 604 unelected alternates also turned out to support their favored candidate.
~ Las Vegas Sun

2. “Muscle” implies that the Sanders campaign did something nefarious, relative to the Clinton campaign. “Muscle” is slang used to describe the mafia.

Both campaigns had fewer delegates and alternates show up for the Clark County Convention than were elected in February.

Was this because the “campaign” was better organized? If so, it was a grassroots effort. Because once the initial caucus is over, the official campaign presence in-state shrinks. At least that’s been the case in Washington.

Was it because Sanders supporters are more passionate than Clinton ones? Maybe.

In February, 55% of the people who caucused in Clark County picked Clinton; 45% picked Sanders. 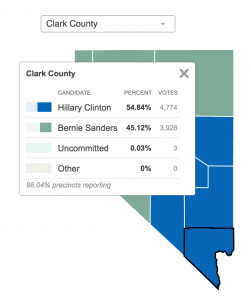 In April, the precinct-selected delegates who attended the Clark County (Las Vegas) Convention went 55-45% for Sanders, a result mirrored across the state. That means the Sanders campaign walked away with 1,613 state convention delegates compared to the Clinton campaign’s 1,298. 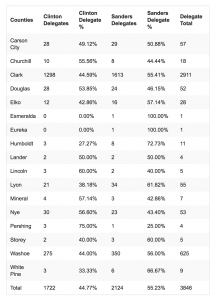 Delegates pledge to attend the next meeting; otherwise, why would anyone vote for them?

So what causes a drop-off?

Getting sick, unexpected need to work, sudden disinterest, family emergency, called out of town? All possible.

That’s why there are alternates — when a precinct delegate doesn’t show up, the alternate takes that slot so that the “vote” isn’t lost.

Wanna be mad? Be angry at the Clinton delegates picked in February who chose to sit out the April conventions. Or who showed up but changed their vote. (No evidence that this happened, but it’s “legal” under Nevada’s non-binding preference rules.)

The system of delegate selection is democratic but it is also representative. At each stage, fewer delegates are elected to advance. And representatives? They aren’t bound by voter polls. Just ask every member of Congress. Or your state legislature.

3. What happens at the state convention?

The state convention is where Saturday’s win will come into play.

There are four types of delegates:

To be counted, delegates selected at the county conventions have to actually attend the state convention and stand for their candidate. The Sanders campaign has seats for 2,124 delegates and the Clinton campaign, 1,722. Only the non-pledged delegates (super-delegates) are exempt from that final vote.

Will everyone attend? If there is drop-off, will it be proportional?

Both the February and April events were non-binding presidential preference caucuses. Delegates selected in April can change allegiance before the June vote.

Only after the state convention will a headline saying “Sanders won Nevada” or “Clinton won Nevada” be truthful.

4. What about February’s caucus?

The February precinct-level caucuses determined the allocation of delegates to the county conventions.

According to the Las Vegas Sun, the state’s congressional district delegate allocation was determined at the February caucus. That means that 20 delegates and two (2) alternates will be allocated based on Clinton’s 53%-47% victory. [Note: the official delegate allocation document does not address this.]

The allocation of at-large delegates and pledged PLEOs, however, will be determined at the state convention. 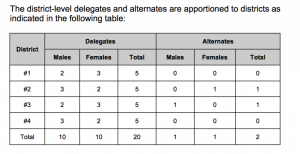 Nevada congressional district allocation of delegates to the DNC, 2016