In the wake of two hurricanes in the Turks and Caicos Islands, researchers document for the first time that catastrophic storms can be agents of natural selection, influencing how species evolve. 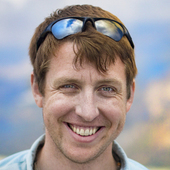 The Turks and Caicos anole is a small brown lizard found running through the undergrowth in the Turks and Caicos Islands. It’s an endemic species, meaning these few islands are the only place to find Anolis scriptus anywhere in the world. Despite the species being fairly common there, scientists know relatively little about its behavior, diet, detailed physical appearance or habitat preference.

Last summer, my colleagues from Harvard University and the Paris Natural History Museum and I took trains, planes, cars and boats to get to two barely inhabited islands called Pine Cay and Water Cay in Turks and Caicos. There, in contrast to most visitors, we turned our backs on the miles of white sand beaches and headed into the low, dense, scrubby undergrowth to fill those knowledge gaps on this lizard species. 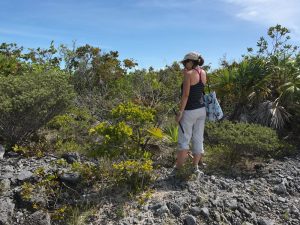 After a week of walking, catching, measuring and videotaping, we were ready to leave the island – just as Hurricane Irma was brewing far over the horizon to the south and east. The skies were still blue as we headed to the airport, but you could feel a charge in the air from the thrum of activity as everyone prepared for the storm. Four days after we left the islands, the massive Category 5 eye of Hurricane Irma passed directly over our study sites.

I realized that my team and I had the last look at those lizards before they were hit by the storm, and we might have a unique, serendipitous opportunity to revisit and see if there were any patterns to who survived. 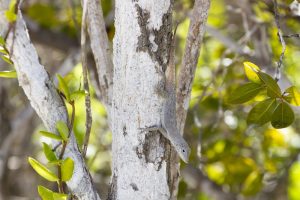 If weathering the hurricanes was a case of survival of the fittest, what features would make these Turks and Caicos anoles most fit? Colin Donihue, Creative Commons

Were some more suited to survive a hurricane?

There are a handful of examples of extreme climate events like droughts, cold spells and heat waves driving evolutionary changes in affected populations.

What about hurricanes? Hurricanes are so severe and fleeting that it seemed entirely possible to us that survival would just be random – there could be no physical attributes of a 3-inch-long lizard that helped them weather the catastrophic storm.

But what if survival was not random and some lizards were better suited to hanging on for their lives? This would mean the hurricanes could be agents of natural selection. In this scenario, we predicted survivors would be those individuals with particularly large adhesive pads on their fingers and toes or extra-long arms and legs – both physical features that would enable them to grab tight to a branch and make it through the storm.

As we were preparing our revisit, another monstrous hurricane, Maria, hit Turks and Caicos. So it was six weeks and two hurricanes after our initial survey that we returned to Pine Cay and Water Cay to retake the same measurements that we had previously on the surviving lizards.

What we found surprised me. Indeed, the surviving populations on both Pine Cay and Water Cay had significantly larger toe pads, on average, than the initial populations had before the hurricanes. We went one step further and used a customized meter to measure the pull of the lizards on a standardized smooth surface and confirmed that large-toepadded animals did have a stronger grip than those animals with smaller toepads. 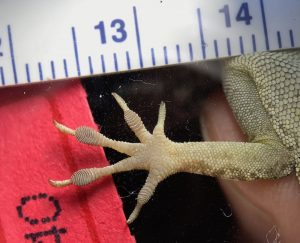 We also found that, on average, the surviving lizards had longer arms relative to the lizards we’d measured before the hurricanes.

This pattern was repeated on both islands, suggesting these patterns weren’t flukes – hurricanes can be agents of natural selection.

Contrary to our expectations, though, we found that the back legs of the lizards were shorter on our second visit. This was a head-scratcher for us, as we’d predicted they would be longer among the survivors. So why were stubbier legs an advantage at a time when the lizards were presumably clinging to trees with all their might to avoid being blown away by hurricane winds?

As we were planning our second visit, we realized we had some basic questions about what the lizards did during the hurricanes. Obviously, no scientists were out there in ponchos following the lizards during the storms. We imagined they’d try to ride things out in tree branches. It was possible they’d head to tree roots but that’s not necessarily a safe strategy. Hurricanes often bring storm surge and deluges of rain that would drown a lizard just as sure as the wind would blow them away.

We decided we needed a way to simulate hurricane force winds in the field. So we bought the strongest leaf blower we could find, packed it in our luggage and – despite some very confused customs agents – set it up in our makeshift laboratory on Pine Cay. We then videotaped about 40 lizards as they clung to a perch while we slowly ramped up the leaf blower wind speed, until they were blown, unharmed, into a safety net.

What we saw was unexpected: The lizards situated themselves on the perches with their elbows tucked in close to their bodies but their back legs jutting out from either side of the branch. As the wind speed increased, their legs, particularly their thighs, caught wind like a sail, eventually resulting in their hindquarters being blown off the perch. Once half their body was aloft, they soon lost grip altogether. This might be the reason lizards with shorter hind legs survived the hurricanes. Shorter legs mean less surface area to catch the wind like a sail, resulting in all four legs staying in contact with a perch.

Our study, recently published in the journal Nature, suggests that hurricanes could change the evolutionary trajectory of these lizard populations. This is an important insight because hurricanes are getting stronger and more frequent due to climate change and so may play an important role for the evolution of many other populations in their path. Our study is the first to indicate that hurricanes may indeed be agents of natural selection. We’re still waiting to see whether future generations of these island lizards – descendants of hurricane survivors – will carry forward the advantageous physical features that were helpful when the 2017 storms hit. My colleagues and I hope to head back to find out very soon.