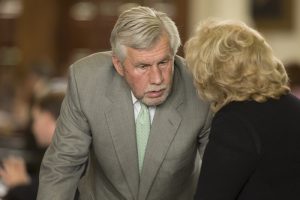 If Texas Sen. Troy Fraser is looking for a country music song to describe his recent months in office, “I’ve Been Everywhere” might do the trick.

In the second half of 2015 alone, the Horseshoe Bay Republican tapped his campaign account to help pay for travel to conferences or meetings in France, Hawaii, Colorado, California and South Carolina, according to his latest Texas Ethics Commission filing. And Fraser, who uses his personal plane to fly across the state, reported spending nearly $70,000 at two private airports for what he told The Texas Tribune were “multiple flights for Senate officeholder-related activities.”

The more than $149,000 in campaign cash Fraser reported spending during that six-month period — more than $90,000 of it on travel — is not out of line with his practices over the course of his 20-year career in the upper chamber. But there was one key difference: All of it came after his June 2015 announcement that he was retiring and wouldn’t seek re-election.

Nothing prohibits lawmakers from spending their campaign cash on the way out the door, though ethics watchdogs say there’s a wide variation in how they do it.

“A lame duck flying around to fancy destinations” is an inappropriate use of money raised for political elections, said Tom “Smitty” Smith, director of the Texas office of consumer watchdog group Public Citizen. “It’s the worst example of this abuse I’ve seen.”

Fraser’s office defended the spending, calling it entirely related to state business — and nothing out of the ordinary.

“The senator will be an officeholder until January 2017 and will continue his Senate-related officeholder activities that he has attended in the past,” said Terri Mathis, his chief of staff. “When he leaves office, he will make a decision of what to do with the balance, and currently, he is leaning toward charities.”

Fraser, who had about $1.36 million in the bank at the end of last year, isn’t the only state official retiring this year with a flush war chest. Sen. Kevin Eltife, R-Tyler, who in June 2015 announced he wasn’t seeking re-election, had stockpiled about $1.4 million at the end of last year. Rep. John Otto, R-Dayton, who announced his retirement in July 2015, had nearly $564,000 left over at last count.

Those two spent plenty in the last reporting period. But most of it went toward charitable or political donations, office supplies and rent for Austin apartments — where they live while in town for hearings and other state business.

Fraser, meanwhile, flew to Paris, France, in July with his wife for a five-day conference organized by the Senate Presidents’ Forum, a nonprofit educational group. His campaign pitched in nearly $9,600 for his airfare, lodging and other costs, his filings show.

The couple also flew to Hawaii in November for a conference sponsored by the nonprofit Independent Voter Project — a four-day annual gathering of lawmakers where Fraser participated in panels on everything from energy to public safety. Fraser reported spending about $3,500 on his airfare and $1,000 to stay at The Fairmont Kea Lani hotel on Maui.

Fraser lingered in the area after that conference, hopping to the island of Kauai. He met with Hawaii Senate President Ron Kouchi, a Democrat, for a chat about energy policy. The Texas senator spent another $950 for a hotel stay.

State ethics laws grant elected officials wide latitude on how they use their political contributions while in office — as long as purchases somehow relate to campaigning or state businesses and aren’t for “personal use,” an often ambiguous term.

When a candidate leaves office, what’s permissible narrows — at least on concrete purchases, said Buck Wood, a longtime ethics attorney. For instance, an official can’t keep office furniture or other equipment after he or she retires. (One lawmaker years ago asked the Ethics Commission about buying stuffed and mounted game for an office.) Nor can they keep the benefits of a country club membership, even if they purchased it with campaign funds before leaving office.

“If you go out and do something that you’re going to continue to benefit from, it’s not going to work,” Wood said. “If it’s something that’s going to be one and done — in other words, you do it and it has no carryover effect — our laws are pretty liberal.”

Fraser’s travels certainly aren’t against the rules; he’s still in office, after all. But Smith, of Public Citizen, said they had the appearance of “private trips and junkets.”

And Rita Kirk, director of Southern Methodist University’s Maguire Ethics Center, said while Fraser isn’t necessarily doing anything unethical — donors typically don’t have clear expectations for how their contributions will be used — there might be more productive ways to spend the money.

“He’s got enough to endow several programs that could sustain a political difference,” she said.

After leaving office, Texas elected officials must dispose of their campaign funds within six years, and many who retire for good donate their balance to charities or political campaigns.

Of roughly $184,000 in total spending in the second half of 2015, Otto reported donating more than $103,000 to political groups or campaigns, cutting particularly large checks to Gov. Greg Abbott, state Republicans and the campaign of Wesley Hinch, a candidate for House District 18. He also reported making more than $27,000 in charitable donations, most of it to Sam Houston State University.

Otto, whose office did not respond to messages, listed only one out-of-state trip on his campaign finance filing — an engineering conference in Jacksonville, Fla. — but only reported paying for baggage fees.

Eltife spent about $122,000 during the same period, including making about $16,700 in contributions to political groups and campaigns and donating $7,200 to charities and other nonprofits. He reported one out-of-state trip: He sent staff members to a National Conference of State Legislatures meeting in Seattle.

The Republican said he wasn’t sure what to do with the rest of his campaign money, and he wasn’t completely ruling out running for another office someday.

“I’d like to get out of office and think clearly about it,” he said, adding later, “I would imagine the bulk of that would go to charity.”

Fraser has plenty of time to decide how to dispose of his cash, accumulated during a Capitol tenure that saw him pass key bills that established a state water plan and created some of the nation’s strictest Voter ID requirements.

During the last six months of 2015, Fraser made one donation from his campaign account — $2,000 to the Bell County Republican Party. And Mathis noted his past contributions to the Texas Scottish Rite Hospital for Children and MD Anderson.