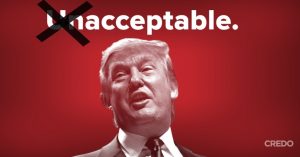 The New York billionaire has insulted entire sectors of people. Yet, the party has widely gotten behind his candidacy. (Image: Credo Action/ with overlay)

As many Republicans rush to disavow latest comments, has the presumptive nominee finally gone too far?

Testing the endurance of the proverbial ‘camel’s back’ on Tuesday, many mainstream Republicans claimed to have reached their threshold of blatantly discriminatory remarks made by the anointed party nominee, Donald Trump.

Throughout his campaign, the New York billionaire has insulted entire sectors of people, from Mexicans and Muslims to women and people with disabilities. Despite this, the party has widely gotten behind his candidacy.

But the conservative world appears to be in free-fall after Trump defiantly stood by his assertion that the U.S. district court judge presiding over the Trump University case would not give a fair hearing because of his Mexican heritage.

As evidenced by the mid-Tuesday press conference by House Speaker Paul Ryan, many in the party appeared conflicted. While Ryan acknowledged that the remarks were indeed “the textbook definition of racist comments,” he said that he will continue to support Trump for president.

“I believe that we have more common ground on the policy issues of the day,” Ryan said, “and we have more likelihood of getting our policies enacted, with him than with [Hillary Clinton].”

In other words, as MSNBC host Chris Hayes put it: “He’s a racist, sure, but we want to win!”

Others within the Republican establishment were either less forgiving or more hopeful that this latest controversy would provide the long-awaited “off-ramp” from the Trump superhighway.

“You have to start calling him out and saying you’re going to retract your endorsement of him today,” declared MSNBC morning host Joe Scarborough, a one-time Trump ally and former Republican congressman from Florida, adding that GOP leaders can’t allow Trump to “run roughshod over what remaining national reputation we have as a national party.”

Sen. Lindsey Graham, former 2016 presidential hopeful, similarly urged his colleagues to rescind their endorsements, telling the New York Times, “This is the most un-American thing from a politician since Joe McCarthy…If anybody was looking for an off-ramp, this is probably it.”

“There’ll come a time when the love of country will trump hatred of Hillary,” he added, insinuating that many Republican defectors would likely turn to the Democratic frontrunner.

Making a constitutional case for her outrage, Sen. Susan Collins of Maine declared that Trump’s statement “does not represent our American values.”

“Mr. Trump’s comments demonstrate both a lack of respect for the judicial system and the principle of separation of powers,” Collins said Monday.

Son of the late and oft-lauded conservative President Ronald Reagan took to social media to declare that he would not be voting for Trump in the California primary, adding:

And Nebraskan Sen. Ben Grasse also took to Twitter to voice his disapproval, writing facetiously: “Public Service Announcement: Saying someone can’t do a specific job because of his or her race is the literal definition of ‘racism.'”

In a bizarre turn of events, Trump and his surrogates are now lobbing accusations of racism right back at critics.

In a conference call on Monday, the GOP nominee told supporters to “attack journalists who ask questions about the lawsuit and his comments about the judge,” Bloombergreported.  “The people asking the questions—those are the racists,” Trump said. “I would go at ’em.”